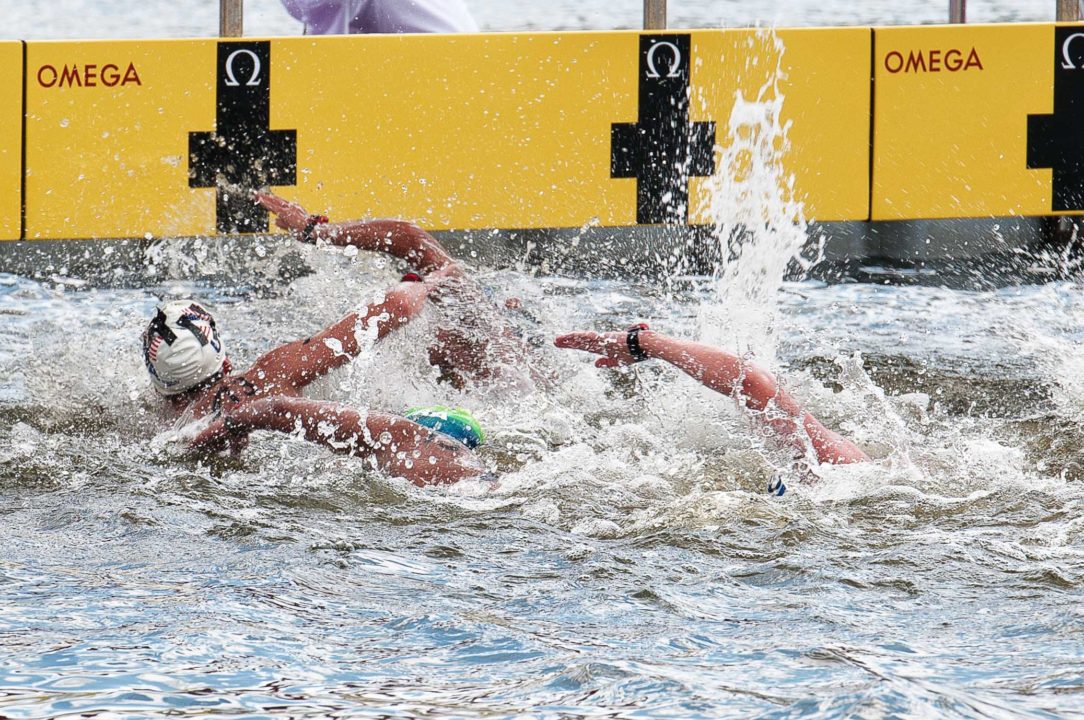 In an elite level 5k and 10K race it’s common the end will come down to fractions of a second between the top finishers.  In fact, look deeper into the pack and you’ll likely see a relatively small time gap. Today’s women’s 10K race in Barcelona is a prime example – the top 20 finishers were within 11.7 seconds of one another. Moreover, there was just 1 second between the three medalist. Many have asked, how can this be?  After racing 10,000 meters it doesn’t seem logical that the swimmers would be so tightly bunched. We don’t often see 1500m or 800m final heats this tight.

However, it does make sense when you consider a few factors. First, at an event like this you are seeing the world’s absolute best in open water swimming – the athletes are incredibly conditioned and for the most part they are tightly matched. Looking at today’s finish results it wasn’t until after the 30th position that a significant time difference appeared.  Second, the swimmers work in packs similar to the peloton in cycling. The pack establishes its own dynamic as swimmers move in and out of the lead. Again, like cycling, a swimmer may break from the pack but she is often reunited with the pack as the group can work together to close the lead. Throughout the race there are subtle moves and countermoves that aren’t usually apparent from the shore.  Swimmers are testing one another via position and speed changes. Perhaps the strongest explanation for the tight finishes in open water are the growing experience levels of the swimmers – they know it’s going to come down to a mind blowing sprint at the end and most of  the swimmers are incorporating a lot of speed work in their training to help enable them to sprint at the end the race. Therefore, the dominant strategy employed calls for being in the right place when the final push is executed.

Most competitive pool swimmers experience  some of these dynamics during certain workouts – some take the lane lead, some follow and some take the infamous role of “Sammy Save Up” waiting to charge on the last repeat.  But in the much shorter pool distance races, the swimmers don’t have the pack dynamic and the race strategies don’t typically lend themselves to this cagey type of racing.  Distance pool swimmers have tighter reference points (50 meters) and specific race plans to that are executed over shorter distances.   For pool swimmers you’re either ‘on pace’ or not.

An open water race is much more dynamic than a pool race – therefore an open water swimmer has a plan but also has to be prepared to adapt to the fluid nature of the pack and the conditions. This has a big impact on the the races being tight at the end.

Check out this footage from the 2013 USA Swimming Open Water Nationals – it’s a good example of how the pack attacks the finish at the end of a race.

Seems like it’s pretty much the same strategies/principle as in the Tour de France.

Agree with Bobo Gigi – I asked a question this morning, and looked this afternoon to see if anyone replied. Lo and behold, there was an entire article about it.

This makes open water more interesting to me… If I ever get my butt back in shape, I’d really like to give this format a try.

You should TEA – open water swimming is a blast.

Is that a timing pad? How does it know which swimmer is touching when it records the times?
Interesting article thanks!

You can see what look like watches on all of the swimmers’ wrists – each contains a microchip that has a swimmer-specific code that communicates with the pad, and each swimmer wears one on each wrist. In big races like this, there is usually a chip reader located near all of the turns too, or at least at the line demarcating the start of a new lap around the course. That’s how you can tell for sure where specific swimmers are at different points in the race, and exactly what their split times are.

In smaller races, it’s common to have a single microchip attached to your ankle, which records your time as you run over a pad for… Read more »

Wow! I jhave never seen a 1.5K race that close let alone a 10K! Congrats to all girls! Positioning and touching the pad definitely is key in a close race like that.

Magical swimswam. A lot of people, me among them, are surprised by the tight finishes in open water, ask questions, and 2 hours later we have a comprehensive explanation.