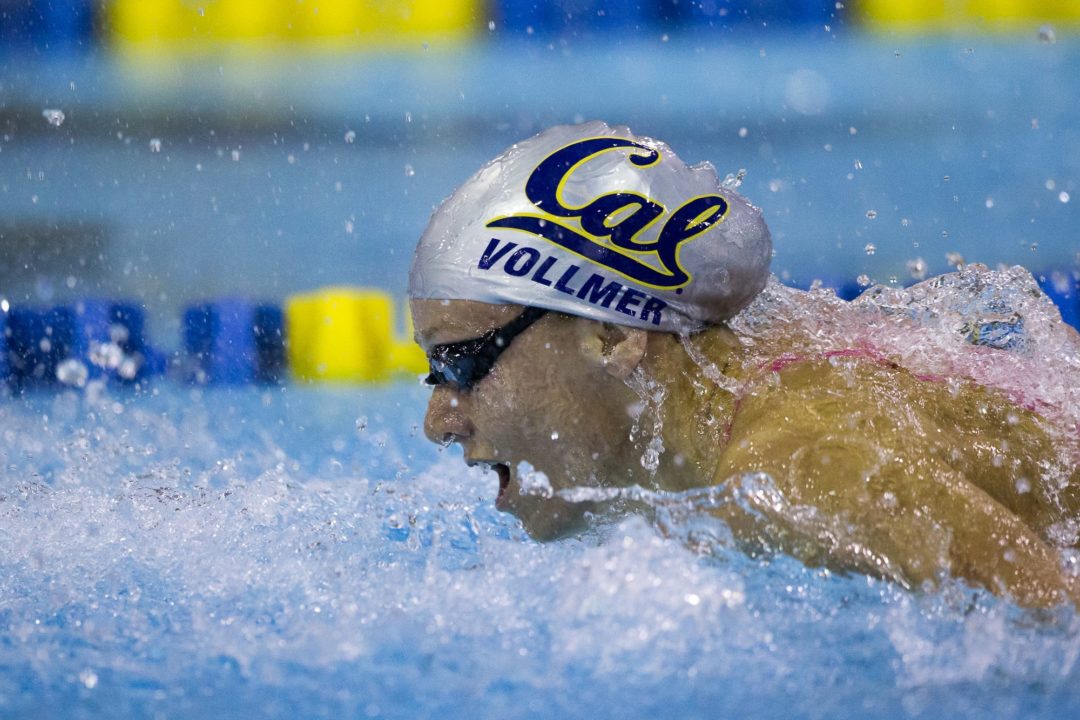 Dana Vollmer shed some light on what she's been up to since last competing at the 2013 World Championships. Archive photo via Tim Binning/TheSwimPictures.com

World Record holder Dana Vollmer’s status with swimming has been one of the great head-scratchers of the last year. At the 2012 Summer Olympic Games, she swam a 55.98 in the 100 meter fly to win gold and break the World Record. She then raced another year to a quiet bronze medal at the 2013 World Aquatics Championships, and despite never officially retiring, hasn’t been seen in a competitive pool since.

Today, that mystery got some clarity when Vollmer announced via Twitter that she and her husband Andy Grant (a former Stanford swimmer) are expecting their first child in February of 2015. That puts Vollmer at around 5 months pregnant already.

This means that a Vollmer return won’t be expected any time soon. While the Americans have some good potential and talent in the 100 fly, as they always do, right now that is a weak leg of United States’ medley relay and the part that leaves them vulnerable at the 2015 World Championships and 2016 Olympics. That torch is now in the hands of Kendyl Stewart and Claire Donahue. Stewart was within two-tenths of Australia’s Alicia Coutts at the Pan Pac Championships in the 100 fly, earning bronze, which is a good sign.

Vollmer made the announcement in a very swimmer-appropriate manner, using a Stanford cap for her husband and a Cal cap to represent her share in the effort.

Blessed news for Dana and Andy-great swimmers, but even better people. Congrats!

I was thinking the other day, even before Vollmer’s announcement, that if I were Natalie Coughlin, I’d start training/racing fly again at Grand Prix meets this season. The door is open in the 100 fly (more so than in the 50 free). Plus, it gets her two swims in Rio and probably a relay medal.

I would agree 100%… except Natalie has never been known to take the path of least resistance, or swim events just because she could medal in them.

Not always and not necessarily. Coughlin is smart, she knows her own strength and limitation, and would swim in additional events if she thinks she has a chance to medal in those events and their schedule are not in conflict with her two main events: 100 back/free. For example: in 2007 she swam 100 fly and in 2008 she swam 200 IM. (she only added in 200 IM into her trials schedule after swimming 2:09 at 2008 Janet Evans Invitational, which surprised her, we all now know it was thanks to shiny suit). But now Coughlin knows that her chance to win more worlds/olympics medals is in 4×100 free, therefore she really is focusing on the free sprints, to a… Read more »