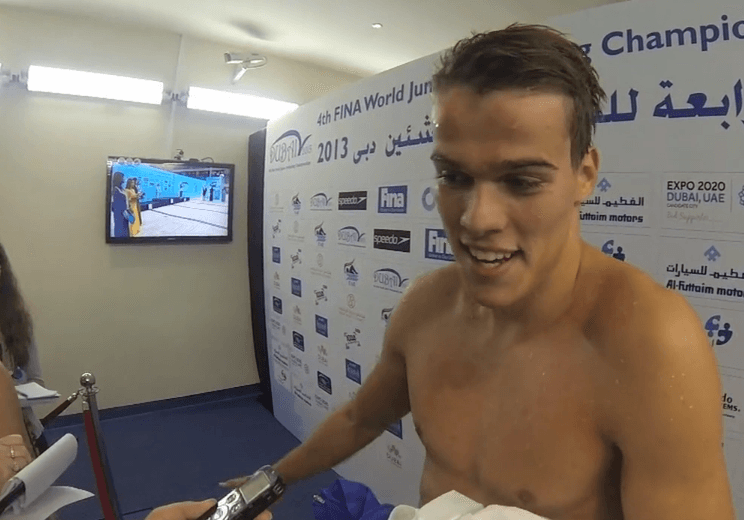 Peter John Stevens, the Slovenian phenom who won the 50 breaststroke at the 2013 FINA World Junior Championships, has signed on... Archive photo via Colin Blair

Peter John Stevens, the Slovenian phenom who won the 50 breaststroke at the 2013 FINA World Junior Championships, has signed on to swim with the University of Tennessee Volunteers.

Stevens put up a Slovenian junior national record time of 27.74 in the 50m (long course) breaststroke this past summer to win the junior world title, shattering the World Junior Championships meet record in the process.

Stevens told SwimSwam that his desire to swim at the Olympic level had a big impact on his college decision.

“[My goal is] being able to go to the Olympic games in Rio and Tennessee is an ideal place to achieve that,” Stevens said.

He is from Kranj, Slovenia, swimming for PK Triglav Kranj.

Stevens will hope to follow in the footsteps of Slovenian breaststroker Damir Dugonjic, who won multiple NCAA titles in the breaststroke events for the California Golden Bears.

Tennessee is sneaky putting together one of the better classes… maybe a cherry on top with Dressel?

Speaking of Tennessee recruiting classes, does anyone know what happened to Evan Pinion?

CoachUK – I believe he had hip surgery in the summer, and will probably wind up redshirting.

Weren’t they also going to get Kacper Majchrzak?

Yep…he may be arriving at the semester. I’ll check in the morning to be sure.

They have assembled some big guns that would certainly compliment a talent like Caeleb. It will be a challenge to pull him away from the “typical” schools though. That is tough for a high school student to look past, regardless of current trends.