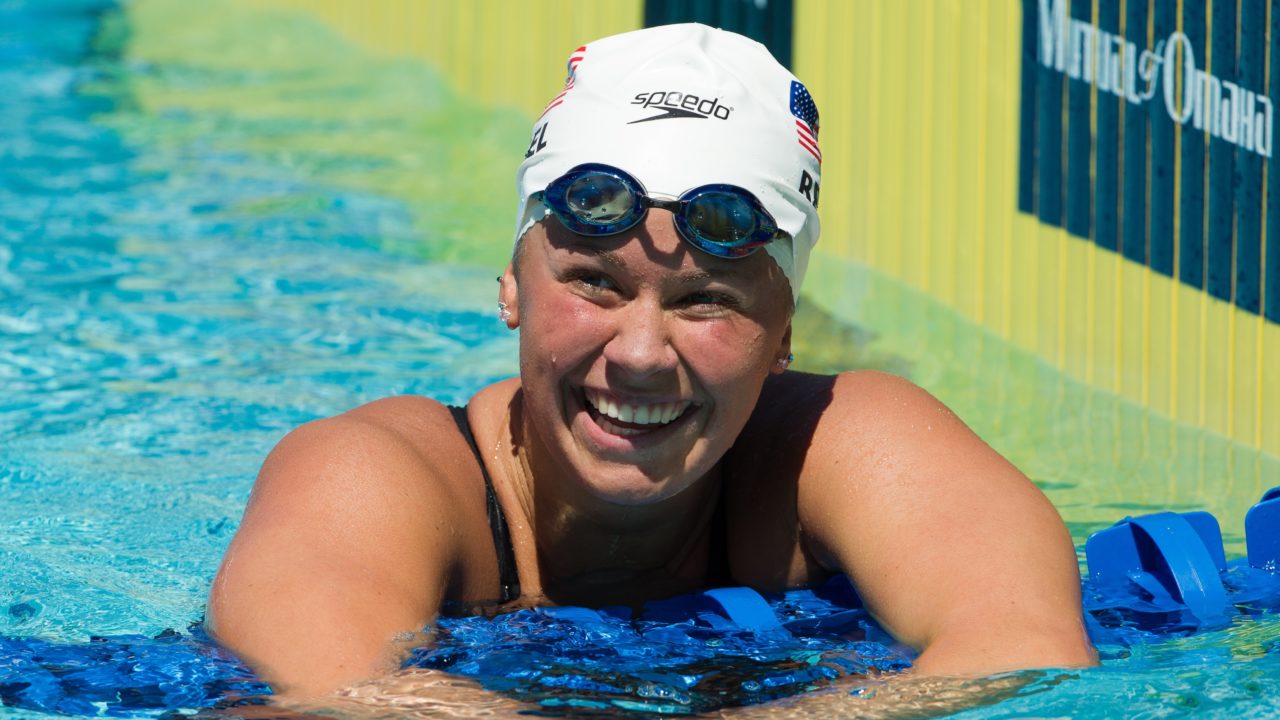 Olympic silver medalist Elizabeth Beisel is our favorite to win the women's 400 IM at Nationals in August. Archive photo via Tim Binning/TheSwimPictures.com

The 400 IM is a tough race no matter how you slice it, and the US has excellent IMers in Elizabeth Beisel and Maya DiRado, both of whom have had great success on the international stage as well as at home. The two keep coming up against each other and with strikingly similar times. They finished within .14 of each other at Nationals / World Championship Trials last summer, with DiRado holding off a strong second half from Beisel to win 4:34.34 to 4:34.50; within .72 of each other at NCAAs, again in DiRado’s favor; and a second apart at FINA World Championships in Barcelona, that time with Beisel in front, 4:31.69 to 4:32.70.

Beisel and DiRado swim a similar race, splitting it very closely; DiRado has the slight edge in the first half, Beisel in the second, and her breaststroke of late has looked very good. It is likely that one of these two women will win the title and I’m guessing it will depend on which one of them has the most left in the tank for the last 50 of free.

The timing is different in 2014 with qualifying meets being held at the end of the summer rather than in June, as was done last year. Therefore it’s difficult to compare mid-season swims. A 4:33 for Beisel in May is a great swim, but no doubt DiRado will be ready to take her on in August.

Challenging them both will be Caitlin Leverenz, the strongest breaststroker in this group. Her 4:34-mid was second to Beisel’s 4:31.7 at Olympic Trials in 2012 and she finished sixth in London with 4:35-mid. With a year of training as a pro under her belt she may be ready to take over the mantle of the top US 400 IMer.

The youthful challengers, Ella Eastin and Becca Mann, are both eager to crack into the leadership circle this summer. Eastin won Juniors last summer with a meet-record time of 4:38.97. She then went on to win Junior Worlds in Dubai with a meet record time of 4:40.0. The 400 IM is probably her best event, and therefore her best chance to make one of the teams, so look for her to be really focused on doing well here. Mann, who has already made the Pan Pac team in open water after winning the 10K at US Open Water Nationals, came in second to Eastin in Dubai in the 4IM. Only .24 behind her teammate, Mann finished under the meet record, too. Her fastest time, 4:39.7, comes from Junior Pan Pacs in 2012, although she was only .02 off her PB at the Santa Clara Grand Prix last month. Her move to North Baltimore this spring is already paying off.

Cammile Adams could rain on Beisel’s and DiRado’s parade. Adams finished third behind Beisel and Leverenz, just ahead of DiRado, at Trials in 2012. She was fifth at Nationals/WCT Trials last summer and fifth again at NCAAs this spring. She has been a 4:47-low so far this season… who knows what her taper will bring?

Sarah Henry is another veteran competitor in the 400 IM. Seventh at Trials in 2012, sixth at NCAAs in 2013, fourth at NCAAs this year, and the defending US Open champion, Henry keeps moving up the ranks in this event. Her 4:43.3 from Santa Clara Grand Prix is the fourth-fastest time posted so far this season, only a second off her winning time at US Open last summer.

National teamer Celina Li could make some waves at Nationals. She was fourth at US Open last summer, top-eight at NCAAs, and won Winter Nationals last December. Last year she had the sixth-fastest time among this group of women. She’s a terrific morning swimmer, but to beat these seasoned 400 IMers she’ll need to knock it out of the park in finals.

It will be fun to see what Katie Hoff does this summer. She hasn’t swum the 400 IM since 2012, but in the three meets she has swum this year she has posted three 2:12s in the 200 IM. That’s within a second of her lifetime best – quite a comeback for the reigning American and US Open record holder.

A member of the National Junior team with Eastin and Mann, Brooke Zeiger came in second at US Open last summer, a half-second behind Henry. A week later she took second at Juniors. The future Minnesota Gopher could have a breakout summer, and the 200 and 400 IMs would be where she would likely make her mark.

Meghan Hawthorne was sixth at 2012 Trials with 4:40.0, and then won the US Open later that summer. In 2013 she won the silver medal at the World University Games. Andie Taylor clocked a 4:44 at Nationals/WCT Trials last summer to finish in sixth place. She was fifth at US Open a month later. Her fastest time is 4:42 from the 2013 Santa Clara Grand Prix.

Note: Athletes are listed under the college/club with whom, to the best of our knowledge, they’re currently training.

It’s not Dirado but DiRado. 😉

1. Elizabeth Beisel
2. Maya DiRado
The real battle will be for the third spot.
Caitlin Leverenz hasn’t swum a fast 400 IM since London but she has swum well in Santa Clara.
Ella Eastin is the junior world champion and will swim in her home pool.
Becca Mann was 4th last year and trains now at NBAC.
3. I pick Becca Mann who will eat Caitlin Leverenz in the last 50 meters on freestyle.

If Caitlin’s back and free were each 2 seconds faster I think she could challenge for second with DiRado:)

You’re right but with “if”….
If Pelton was 3 seconds faster on breaststroke in her 200 IM, she would be olympic champion.
If Ervin had a good start in his 50 free, he would be unbeatable.
If Irie had the underwaters of Lochte….
If Cseh wasn’t in the same generation as MP and Lochte, he would be considered as a legend.
And I can make a long list.

…..and if frogs had wings they wouldn’t bump their behind every time they hopped!

I know, I know, just making a point since she’s always there until those two strokes we’ll see how they’ve improved soon!

Interesting to note that Katie Ledecky is the 5th US performer of the year so far.

No. She has enough work to do on freestyle.
But 4.43 without training for IM is pretty impressive.

She might swim it. There are no freestyle events on that day, and she’s basically a lock to qualify even if she’s tired by the end of the meet. She has swam a lot of different events at meets throughout this year.