With 1:54.3 200 Fly, Urlando Becomes Fastest American Since Phelps in Rio 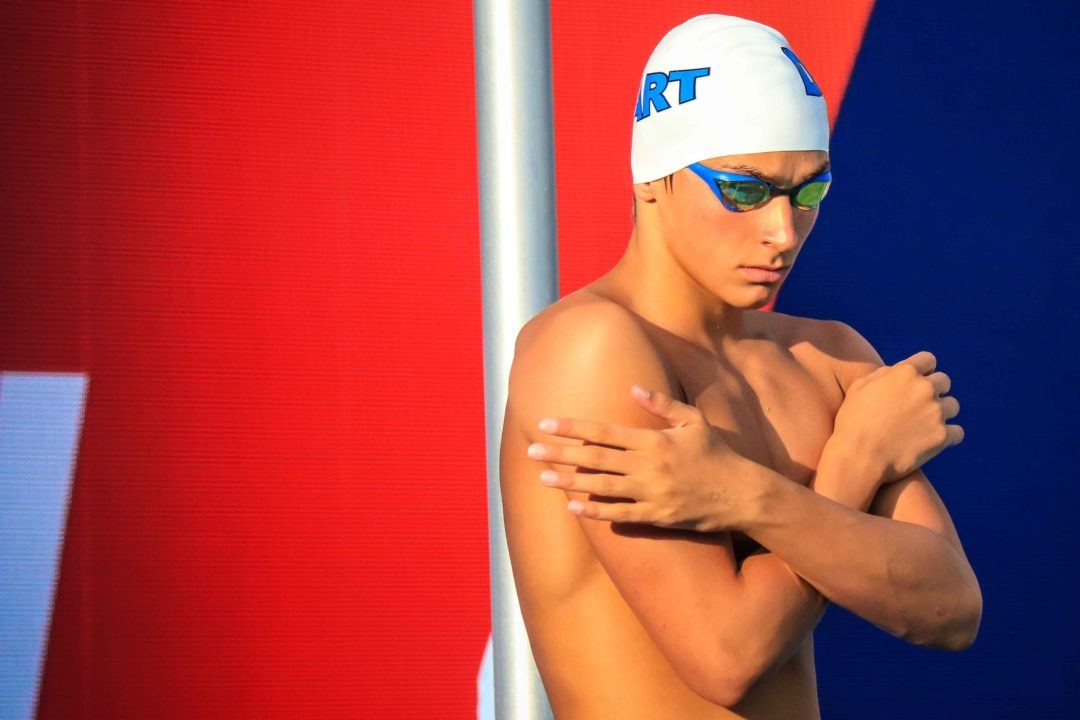 this gives us perspective on just how much swim fans were spoiled by Phelps' dominance and skill in his pet event. Current photo via Jack Spitser/Spitser Photography

Among other things, this gives us perspective on just how much swim fans were spoiled by Phelps’ dominance and skill in his pet event. Cutting over 3.5 seconds off of the 200 fly world record over his career (1:55.18 when Phelps first broke the WR to 1:51.51 as it stands today) Phelps truly set the bar for the mid distance event, a bar that is still tough to match years after his departure. Since Phelps won gold in the 200 fly at the 2016 Olympic Games in a time of 1:53.36, no American has been under 1:54 in the 200 fly.

With his swim in Vancouver, Urlando becomes the fastest American in nearly 3 years. Here are the fastest times from every major national and international competition post-Phelps:

Hmm I am not sold on Wilimovsky or Grothe – the competition is really good. And breaststroke will be tough too. I think Miller only with a chance. Although the 200 is unpredictable.

We’ve got some really deep talent on the men’s breaststroke side. I could see Miller, Cordes, or Andrew medaling.

I am not sure Cordes will be back to his best. Andrew maybe, but he needs a half second drop to medal

Andrew is still quite young, so a half second drop wouldn’t be completely out of the question.

More like a second
People down voted me but hey did someone at least saw peaty wilby and Ilya times???

Don’t forget Ian Finnerty. He is finally training meters instead of yards. Partners with Miller at practice. Ray will deliver.

Andrew is a 50 swimmer and his training philosophy results in limited tapper. Great in season swimmer that will not see the big drops at Olympic Trials.

My money’s on oof

Oh yes, dean will probably come to the rescue for the 100 breast and 400 Free how could I forget him

Just gotta type His Name three times and a photo of Dean shall appear.

Just copy and paste the link

How about Carson Foster for the 400 IM? He did really well last summer and has been on trajectory to be a top contender.

Carson is an amazing 17 yr old. He’s not a Tokyo medal contender.

If he doesn’t perform? You could say that about any swimmer in the world. What kind of reason is that lol

Worked pretty well as a reason last summer. Wins one gets smoked on the others. Admittedly that was after his Kneivel-esqe, jump Snake River Canyo motorbike accident that caused him to get a bandaid.

You know at some point you’ve got to realize that you’re just…grating to other people. You’re clearly mad he’s back and your trashing him was for not…but you gotta be more socially aware than this. I know it’s hard for some people. I get you’re hiding behind the phrase “trolling”, but yeeesh

u seem to have a problem with his actual ( amazing !!! ) shape – too bad , u wont enjoy this summer’s Dressel party .

Prenot is a legit contender in the 200 breast. It’s a deep event with many clumped together. So not a firm medal favorite. But a medal in the 200 would not be “rather surprising.” He has a PB of 2:07.1, won Silver in Rio, and was again 2:07.2 just last summer. We’ll see how he goes in Korea. But for now he should be considered one of the swimmers in the mix.

How do you know Chupkov will win the 200? Is he really that far in front of everyone else? Like he’s Peaty in the 100…a done deal. That’s quite a dramatic emphatic prediction! Especially as you’re often one of the first to pull up anyone that’s bullish about American swimmers. The Japanese will be hungry at home and then there are young and improving athletes like Australian Matt Wilson. These guys are right there with Chupkov.

I dont see him beating Chupkov or Watanabe, which leaves us with a possible bronze medal. He is one of the contenders along with the 2nd japanes guy and the young guy from Australia.

1500 probably not. It’ll take under 14:35; I think this is the year it takes way off internationally. 200 breast? Hmm, I also think (possibly overestimating) that it may legit take sub 2:07 to medal (do we have that?) …. also….I, along with many other haters, was not on the Michael Andrew boat several years ago…but his 1:57 in Richmond, looking like he was bathing, made me jump right on the bandwagon. The man is a performer..he’s our best bet in most things he swims- like him or not

Any chance he goes pro? IMO one needs an individual gold medal to make it worthwhile to forego ncaa swimming.

He’s verbaled to Georgia which is arguably one of the best 2fly schools in the country. (Kalisz, Bentz, Clark and that’s just the guys)
I think he’ll be fine.

From what I heard he really wants to go to school and he is really proud to be going to Georgia. I think he said both his parents went there or something like that, but if he doesn’t do the full four years I think I can see him doing two and then going pro. It just depends on how much he progresses and if the money is there I would say.

I agree with you. To Rachel, I knew he committed to Georgia and wasn’t saying anything about Georgia being a good college choice but more should he take the money if he wins a gold?!?

If he wins an individual gold in Tokyo he’d be insane not to turn pro imo.

Could do, that he’s a guy and where college for him falls in the Olympic cycle makes it less likely though.

He can do three years of college, turn pro and still have two or three Olympics to make his money.

Not a guarantee. Injuries or something else could happen. Right now, his biggest selling point for turning pro would be the potential that he has. 200 Fly is not a “sexy event” like the 100’s or 50, and he does not have relay ability yet. MA pulled it off but he had a bit more versatility and was in shooting distance of making relays. But, if the money is there and a sponsor is willing to pay, he should jump on it. He can still go to college and train with the team, so turning pro does not take that away.

Pretty amazing what Billy has been able to help Luca develop into. Take a listen into his program when he was on the podcast a while ago – https://rittersp.com/podcast/the-multi-sport-athlete-is-a-foundation-for-a-swimmer-billy-doughty