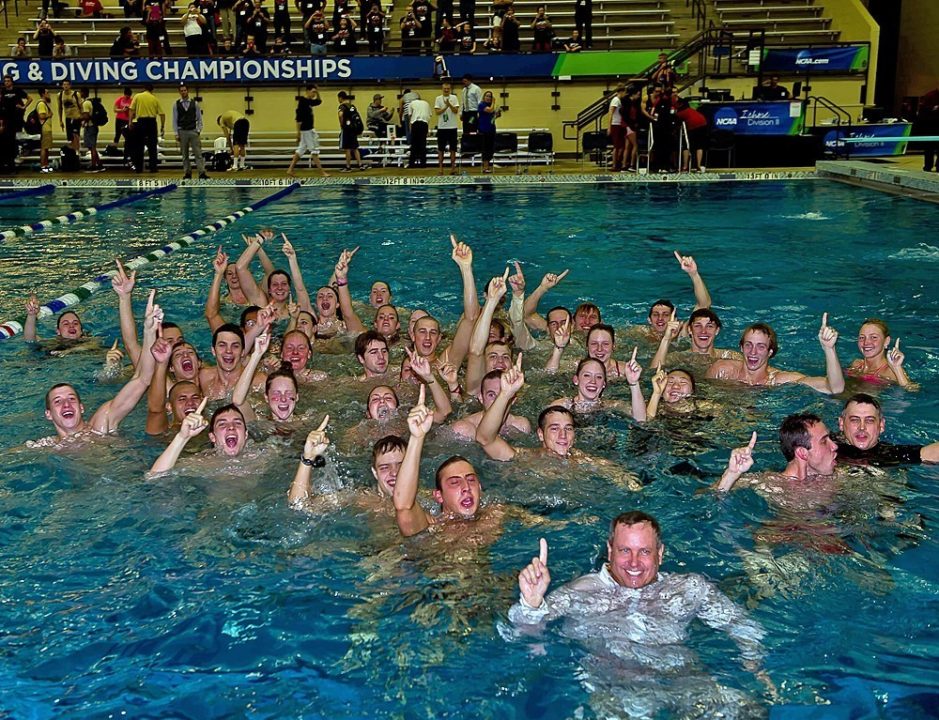 A Look into the World of Division II Swimming as we Approach the 2013-2014 Season. photo via Drury Athletics

The end of last season saw the Drury Panthers Men run away with their 9th consecutive NCAA Division II National Championship Crown.  The Drury Women avenged themselves from last years 1-point loss to Wayne State (Mich.) and won their 9th Overall Championship, not consecutively as the men have though.  This year will prove to one of the more interesting in past years on both sides of the ball.

35 Seniors from last years top-10 teams have graduated, but a slew of young-guns look to take advantage of these openings after falling short this past year.  With strong freshman classes coming in across the country, you never know what exactly will been seen until they hit the pool.

Here’s the top ten teams from nationals last year, with a list of seniors who placed top sixteen that graduated, followed by returning athletes to watch for in the coming season. Individual national champions are in bold.

Drury looks to repeat for the 10th consecutive championship.  Supported by their great relay combinations; and, with only graduating 4 seniors and recruiting a strong incoming class, the Panthers look as though they could pull it off.  They had almost a 150 point advantage on the nearest team from last year.  Look for strong relays to anchor the Panthers run. Sean Feher will anchor the distance, he place 11th in the 1000, and 14th in the 500.

*NOTE: Daniel Swietlicki, the defending champion in the 200 Backstroke has transferred to LSU.

The Mocs graduated most of there individual event points between its three seniors, but with the leadership of senior Zachary Edwards and Robert Swan holding down the relays they could stay in contention.  Also look for Luis Rojas who finished second in the 200 Freestyle last year.

Returning the champion in the 50 Freestyle from last year, Senior Michael Branning won’t defend his title, as the Lopes are headed to Division I.  Look for Sophomore John Feely to also swim well at the CSCAA Invitational in the distance event as he returns with two top-16 placings from last year in the 1000 and 500 freestyles.

Returning what very well might be the best all-around swimmer in the bunch, Junior Piotr Jachowicz looks to defend his titles in both the 200 and 400 IM’s which he broke both National records in last year.  He also placed 4th and 5th in the 100 and 200 Breaststrokes, respectively. Look to the leadership of Senior Kristian Larsen to make an impact on the relays.

Senior Marko Blazevski looks to end his college career with a NCAA title as he was runner-up in the 400 IM and 4th in the 200 fly last year.  Senior Tim Kniffler looks to improve from his 6th place finish in the 200 Backstroke as well.

Senior Nicholas Korth looks to avenge his narrow loss in the 200 Breaststroke from last year where he missed victory by 4-hundreths of a second.  Senior Reid McCallam looks to lead the relays to a repeat of multiple top-8 finishes from last year.

*NOTE: Dane Stassi, 200 Fly Champion, is no longer on the UCSD Roster, according to his Facebook page he now attends UC Berkley, but was not on their roster either.

Junior Alex Menke looks to repeat as the 1650 champion and add to his medal count as he was 2nd in the 1000 and 8th in the 500 just a year ago. Queens also adds Matthew Josa, a member of the American Junior World Championship team and Junior National team, who will immediately contend for multiple national titles. His addition alone should be worth 80 points to Queens’ overall scoring, at least, which could move them into the top 3, but they will need more than that to contend for the title.

With the loss of Nordstrand, who attributed 72 points (including relays) last year, the Sharks have a large hole to fill.  Look to Seniors John Haynes and Florian Mehlan, two members of those relays to help a younger Sharks team to succeed on the national level.

Returning no event winner from the previous year, just like on the Men’s side Drury looks to their depth and their relays to drive them to victory.  Sophomore Sarah Pullen looks to improve on a phenomenal freshman outing as she was top-8 in the 1000 and 500 Freestyles.  Junior Wai Ting Yu returns to the pool looking to take the 100 Freestyle crown that she narrowly missed last year.

Junior Kristina Novichenko looks to bolster he resume after finishing 4th in the 200 Fly and 8th in the 400 IM.  Senior Kayla Scott returns looking to earn back the crown in the 100 Breaststroke which she won two years ago, but finished 2nd last year.

Returning Senior Anjali Shakya will try to defend her title in the 200 Freestyle.  Sophomore Colleen Daley looks to improve on her performance from last year helping to score two top-8 relay teams.

Graduating the winner of the 100 and 50 Freestyles last year, the Cardinals are looking to Junior Kaitlyn Whalen and Senior Molly Freeman to lead the team this year. Whalen finished 11th in the 200 Butterfly while Freeman and Sophomore Mikayla Felchak hold down the distance events finishing 4th and 3rd in the 1650, respectively. Incarnate Word is beginning their first season in Division I this fall.

Senior Kathryn Pheil looks to improve her 4th place ranking in the 200 Backstroke from last year while Sophomore distance swimmer Julie Wessler returns from a 19th place finish from last year in the 1650 looking to continue a strong Bulldog distance trend.

Having the “Queen of Division II Distance Swimming” in their back pockets in Sophomore Alli Crenshaw (defending champion in the 1000 and 1650) the Mocs can only improve from last years performance.

A team with no graduating seniors at the meet, the Golden Rams look to capitalize on their young talent store. Junior Lauren Carastro returns after finishing 2nd in the 1000, 7th in the 500, and 12th in the 1650 to lead a young Rams team.

Graduating no seniors, eturning Sophomore Joyce Kwok returns to Post looking to defend her title in the 200 Butterfly from last year, also provided a blazing 24.5 Fly split on the 200 Medley Relay.

Returning the defending champion in the 400 IM and 200 Backstroke in Sophomore Caroline Arkelian the Royals look to improve there national standing as a still young program.

These swimmers were not part of any of the top ten teams but deserve recognition as NCAA Champions. Last Years Seniors have been bolded.

I believe incarnate word and Grand Canyon are both not in D2 anymore. Went D1

Drury’s going to be hard to beat with UIW and GCU gone.

Going down the list, UB might just be the next-best team, their recruiting class looks pretty nasty, with a bunch of competent sprinters.

Wayne losing Abascal isn’t too bad, a worse loss is relay stalwart Hesche, though they have a mid-D and flyer coming in who should more than make up for that. They still need a sprint anchor though.

Queens lost Trice to UGA, that’s a huge hole for them though Josa is a stud.

I would be scared of St. Leo… Read more »

Also on the “figure out second taper” train is Missouri S&T. They lack some depth but can put together some very solid relays, although probably not as good as last year’s without Schranck/Dole especially.

Vyacheslav Fattakhov has one year of eligibility remaining and will be swimming for the Purple Knights this year.

We did graduate Krzysztof Wilk, 8th in 200 Free and solid Freestyle relay contributor from 200 – 800.

Thank you for your information, the results had him listed as a SR. The story has been updated to include his performances from last year.