Reece Whitley is the future of breaststroke for USA Swimming. That’s already agreed upon by 90% of our readers. Sure, he’s got Michael Andrew there, one year ahead, one National Age Group Record ahead of him (in the 100 meter breaststroke), but Whitley’s all about this one stroke…for now.

The towering Penn Charter Aquatic Club phenom – 6 feet, 8 inches tall – owned the media room at his first Arena Pro Swim Series in Charlotte.  For an athlete so young, he handled himself well among the stars, and it’s clear the stars liked him. 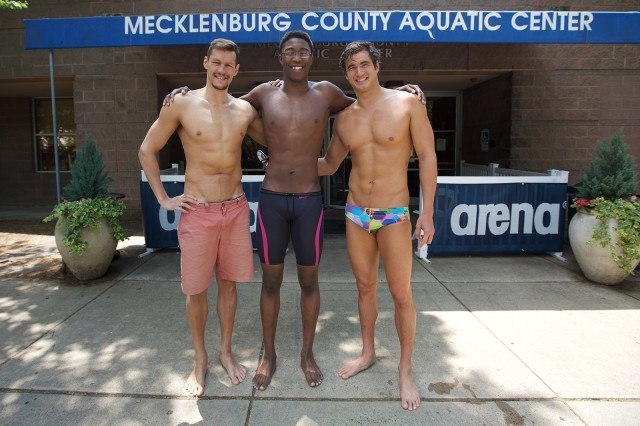 Whitley’s doing the work in the water. Dropping from 1:03 to 1:01.8 in the 100 meter breaststroke is astounding, and he essentially said he’s gunning for a 1:00 in August. His 2:12.9 National Age Group Record in the 200 meter breaststroke bodes well for the future. Anyone who can train in a 6-lane, 25 yard pool with age groupers, then face-off with pros in a 50 meter pool and final in his first truly elite meet, merits serious attention….from NBC.

Whitley should final at the US Olympic Trials in Omaha.  He’s on track.  SwimSwam already took the poll, asking readers if they thought he could make the 2016 Olympic Team.  21% said yes.  The percentage is low, but 1 in 5 swim fans feel he has a real shot. I think it’s legimate considering Whitley’s rate of improvement.  Finaling at US Trials would be enough, a huge success. Moreover, participating at US Trials is enough given the valuable experience he’ll gain. Whitley, provided he remains healthy and passionate for the sport, is a cornerstone player on the 2020 and 2024 Olympic squad, but…just for fun…

This is a Gold Medal Media production presented by SwimOutlet.com. Host Gold Medal Mel Stewart is a 3-time Olympic medalist and the co-founder of SwimSwam.com, a Swimming News website.

Agreed on the time. That’s the range…and that would be a huge drop in time for Whitley….but swimmers make big drops when they’re young. We’ll see…

I can see Prenot, and Whitley making the 200 and I think Andrew and Cordes could in the 100,,,

HSSWIMMER – I gave you a thumbs UP but it registered as a down number. It won’t change back. You actually have eight positives instead of seven. Just wanted you to know that.

Anyone remember a certain kid who dropped his time by chunks to make the 2000 Olympic team and then continued dropping all the way into the Olympic final? And the USA had THREE of those youngsters….Phelps, Piersol and Crocker. I do believe that Reece has enough time to surprise us all by Trials. Never ever underestimate a young kid whose arc is shooting straight up. I truly believe Reece can make the team. Doing it is another ball of wax but I believe in him. Anything he does will not surprise me – except winning the gold in Rio. GO REECE!

I bet Reece turns into a speed machine as he gets stronger, but at 15 he is better suited to the 200.

He should work on his dolphin kicks, too. It’s only a matter of time until FINA allows unlimited dolphin kicks in breaststroke.