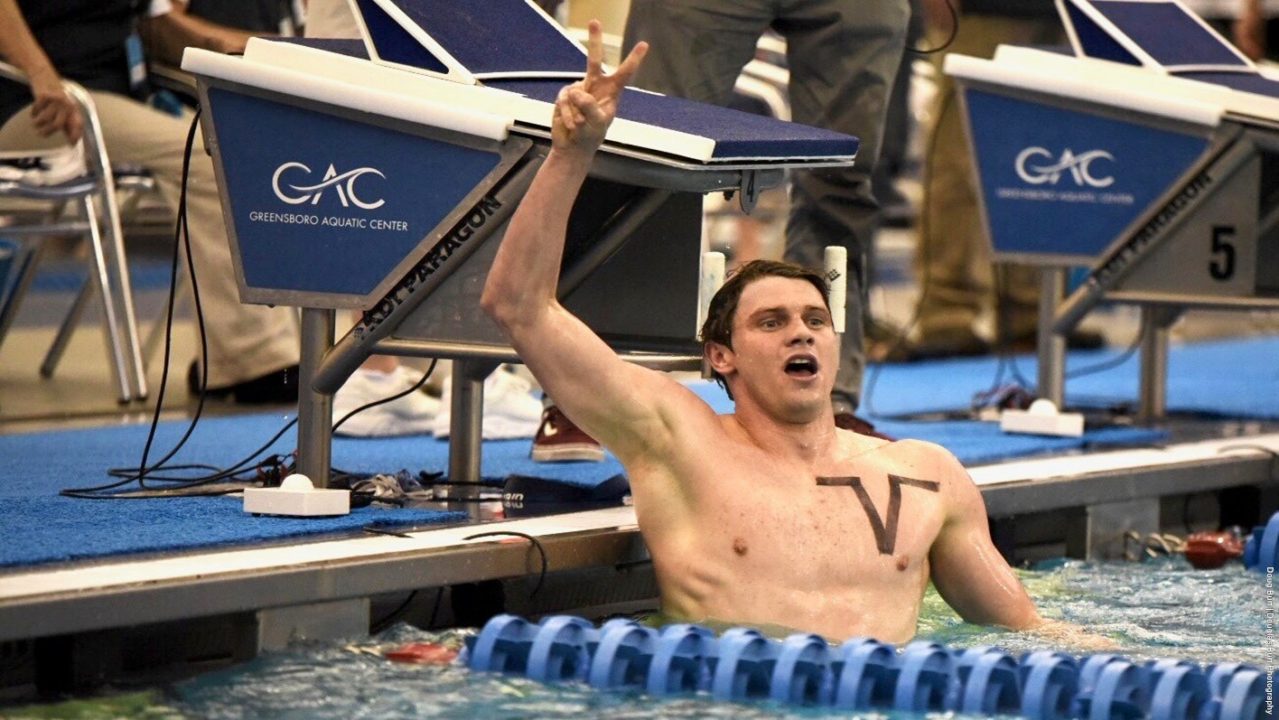 For most of the college swimming world, championship season is over. Team’s conference meets marked the pinnacle of their seasons.... Current photo via Virginia Athletics/Doug Burt

There are a few teams that likely haven’t fully rested yet. The Texas men, for example. For them this analysis isn’t very useful. Their target meet is NCAA’s. However for the vast majority of division 1, that isn’t the case. Schools with only a couple of qualifiers are unlikely to see their numbers change significantly with the inclusion of nationals.

There were 4114 swims at women’s conference meets where the swimmer had a time in that event from a previous conference or nationals meet. Times were a median of .2% faster than previous season times. They were an average of .2% faster and the time change percentages had a standard deviation of 1.6%. Here’s the distribution of time changes:

The top performing major conference team was Alabama who dropped a median of 1.3%. Florida State were next best with 1.2%.

Arizona State had a weird year. 100% of their eligible swims were faster than last year, but they only had 7 swims that had a previous time at a conference or national meet (swimmers times from before they transferred aren’t considered). They were one of only two teams with fewer than 10 times in the data set. St. Francis was the other .

Texas added the most time among major conference teams. They added a median of .4% and an average of .7% at Big 12s. That would indicate they have quite a bit of time left to drop at nationals. This is very similar to how they swam at Big 12s last year when they added an average of .7% to their previous conference/nationals bests. Texas won the national title last year, so their substantial time add isn’t cause for concern.

Unrelated to this article. Why is Shaine Casas swimming 100 and 200 fly instead of 100/200 back? He’s 45.9/1:39 in backstroke, while he’s 45.9/1:42 in fly events. It seems like he would have a much better shot at scoring in the backstroke events and it’s not like they have a conflicting schedule. Confused by this event choice.

They entered his twin from a different dimension

I’m glad that isn’t actually a real tattoo. It would be a very unfortunate one.

Texas effectively doesn’t have a conference meet. Just an in season intrasquad meet that several other teams happen to attend.

You’re right, big 12 is a joke. How could a power 5 conference only have 3 teams. They need some other schools to start fielding teams

Explain why Texas would approach the conference meet any different if they were in the SEC or PAC 12 vs the Big 12-9. You can’t. Because any such argument revolves around the idea that they would view the conference title as an equal or greater goal than the national title. That’s ludicrous in any conference. The goal of the Texas team is to win NCAA’s. They just happen to also win the conference title every year. But if forced to choose between winning conference or ncaa every team would choose ncaa’s if it was reasonable. The Texas team as currently constructed would approach being in the SEC or PAC conference meet the same as big 12. Kids with their NCAA… Read more »

Texas fans would describe conference meets as meaningless lmao. Btw schools do care about getting conference championships. You get a banner, get to sell your worth to your school’s AD. Not saying that Cal or other elite teams go all in for winning them, but they also don’t train completely through it as much as Texas does. Would Texas approach conferences differently if they were in a competitive conference? Who knows, but if they trained through it still, they wouldn’t get the best of both worlds they currently enjoy. It’s not a knock on Texas, but it is advantageous to not have any real competition for the conference meet. Less pressure, and easier to focus on the big meet. But… Read more »

Didn’t say they weren’t important. Just not as important.

Ok, so 100% of swimmers at Indiana, Cal and Florida tapered for conference? Got it

USA Swimming, take note. Schedule Olympic trials six months out of Olympics since we are at a disadvantage

So, you think a team that has a chance to win NCAA’s should 100% taper for conference meet instead?

And you think teams in the SEC:Big10:PAC are at a disadvantage by being in a hyper-competitive conference meet one month before NCAA’s? Consequently, The USA is at a competitive disadvantage with their Olympic Trials set up?

Think that through. Why is the greatest swimming nation in the world knowingly putting themselves at a competitive disadvantage by having two hyper competitive meets one month apart?

Maybe because they aren’t? Because that’s not really a problem?

I would guess no one is 100% tapered for their conference. I think it is more the grind of being in a substantial conference with a conference schedule, followed by a conference championship, followed by NCAAs, that most teams are subjected to while Texas is not. Should everyone be gearing for an NCAA victory, of course yes. But does any other conference have the luxury of sitting out their conference, no. Not if they want to keep their program funded.

You act like we’re playing football. You’re swimming. It’s always you against the Clock. You’re not wrestling the guy in the lane next to you. You develop a year long strategy for your racers with the goal to peak at NCAA’s. That’s goal 1, goal 2 and goal 3. You do everything with that in mind. Texas as currently constructed would adopt the exact same strategy as they do now in any other conference. If they finished 4th in SEC and 1st in NCAA they would be thrilled. If they finished 1st in SEC and 3rd in NCAA they would be devastated. Again, if the “intense” conference meet 4 weeks out from NCAA was a competitive disadvantage you wouldn’t see… Read more »