Where is the Cal Men’s 200 Medley Relay? 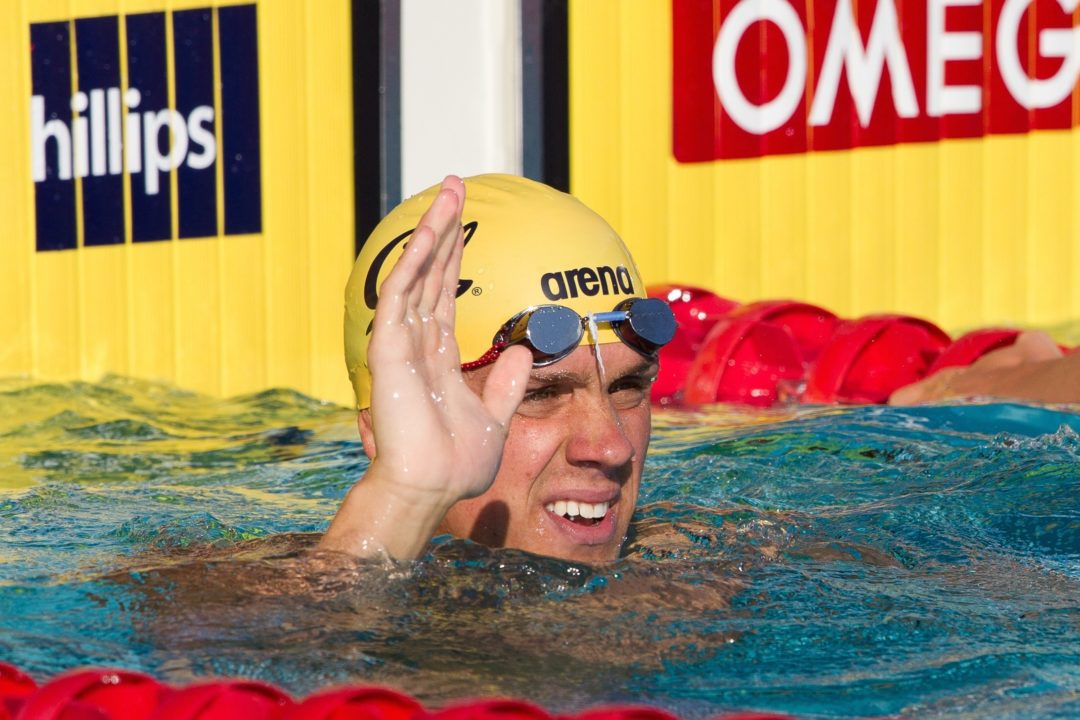 Why was Cal's 4th-ranked medley relay left out of NCAA's? The mystery is solved. Photo courtesy: ©2012 Tim Binning

Anyone who has ever tried to work their way through the NCAA selection policies know that they’re brutal. They’re nearly incomprehensible even for those who are paid to know them – the coaches – which from time-to-time even leads to painful mistakes.

Some may have thought there was a mistake when the men’s psych sheets came out and the Cal men’s 200 medley relay didn’t receive an invite tot he big meet, despite being the 4th-best in the country this year. But this was actually a perfectly-calculated move by Cal men’s coach Dave Durden.

Superstar Tom Shields, one of the leading candidates for NCAA Swimmer of the Year, is at the heart of this. He wasn’t on Cal’s A 200 free relay at Pac-12’s, but after a time-trial later in the meet, he ended up on the Golden Bears’ fastest 200 free reason of the season, which did earn an invite.

But that left Cal in a position, without the same depth as they had last year, where Shields was on the fastest relay for Cal in each of the 5 relay events. According to NCAA rules, if he’s used to enter five relays into NCAA’s, then he can only be entered in two individual events, which obviously wouldn’t make sense for Cal (he could win three National Titles individually).

So that forced Cal to use their best relay time that didn’t include Shields – which incidentally was their B-relay from the Georgia Invite in December.

Cal will still be allowed to enter an optional relay by combining four of their 18 invited swimmers. That relay will be seeded with the school’s best time, but will still be entered behind the 13 invited relays – which is to say that they will be the 14th seed.

With so many swimmers invited, it’s not going to be difficult for Cal to put their 5 best relays together. They easily qualified everyone that they needed to qualify. This is where Durden makes his money though: figuring out which 4 are the best use of the superstar Shields to maximize his team’s outcome.

There’s no easy answer to the question, but it seems as though they’d want to leave him off of one of the day two relays, where he’ll already have two individual events. He certainly can’t be taken off of the 800 free relay, as that relay would probably add about 3 seconds – which could drop them 6 or 7 spots in the rankings. Therefore, the session-ending 200 medley relay is the choice where Shields will likely sit out (though, it’s not a necessity just because that was the relay not entered).

As a result, Cal probably slides Marcin Tarczynski into the backstroke leg, and shifts Mathias Gydesen from backstroke to fly, which is the spot that Shields previously occupied.

Brown is a good option too. It will come down to whichever combo the coaches think are more ready. My guess is, based on his awesome 200 fly time, Brown used a bit more of his rest at Pac 12’s than was Tarczynski. But I could be wrong.

Actually, last year Brown was generally faster at conference (46.66 fly, 47.85 back, 1:44.82 2fly), but was left off the NCAA team due to the swimmer cap, and the large number of Cal swimmers in his events. Also, I get the impression Gydesen is slightly more of a backstroker than flier, and Brown more of a flier than backstroker. EIther way, they’re both doubling with the 100 fly/back, so it’s a real toss up.

It’s hard to call, especially since neither Tarczynski nor Gydesen has been very fast over 50 back this year. Tarczynski is due for a big breakout; people don’t realize how fast his LC times are. Before he went to Cal he was more of a flier than backstroker, but he’s completely converted, having won the Polish championship (over Radoslaw Kawecki). Maybe they were actually planning to bring Brown this year, and as a result he is less rested. Overall, I’m a little confused as to why Shields is swimming the 400 over the 200.

Gydesen was 21.75 and Tarczynski 22.03 at Pac-12s, so with a full taper, shave, etc, either one could be around the 21 low/mid where the other teams will be (there’s only been a handful of swimmers who’ve ever lead off under 21). I’m also surprised Tarczynski hasn’t done more with the 100 free, since he was around a 47 100 scm free before coming to Cal. Based on what I know, I’d go with Tarczynski and Brown on the 200 MR; Gydesen can go top-3 in both 100 bk/fly, and Brown can give it all in the prelims to final, while Tarczynski only has the 100 back on day 2. Shields on the 400 makes a lot of sense because… Read more »

Those are all good points. Can Cal keep the streak in both relays going at 3?
Tarczynski seemed to have great potential in the 50, 100, 200 free and 100 fly, so it is puzzling that he is a backstroker now. That might have been his weakest before, so I think he is due for a huge 200 IM.

Ah, meant to reply to Chris there.

what a great thread. The fact that there is a discussion of who will be on the Cal medley relay shows what an exciting program they are! I think they win it all in a shocker darkhorse triumph.