Watch David Curtiss Post a 19.77 in the 50 Yard Free 4 Months Out From Trials 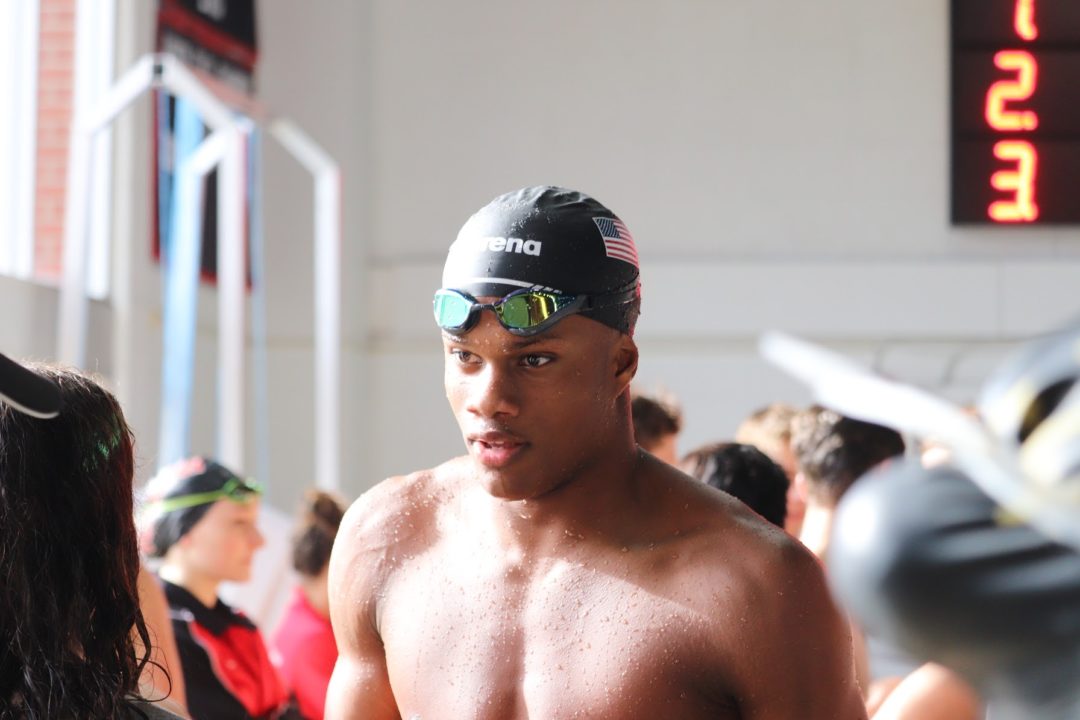 18-year-old David Curtiss, the fastest American man in the 50 meter freestyle this season, ripped a 19.77 on the leadoff leg of the 200 yard free relay at a dual meet between the Pennington School and Wilberforce School on Wednesday.

This was within .35 seconds of the lifetime best time he swam in February 2020 which set a new National Independent High School record. The full meet was broadcasted here and you can watch Curtiss’ 200 free relay lead-off at the 1:23.00 timestamp.

On Wednesday Curtiss also contested the 200 yard free, touching the wall 1st with a time of 1:40.37. While he was .42 off his lifetime best, this swim broke the Pennington School record by nearly two seconds.

The previous record was set 3 years ago by Jake McBride, a current sophomore at Drexel University.

This season, Curtiss is ranked #5 in the world and #1 in the United States in the 50 meter freestyle in long course thanks to a 21.87 he swam at the Pro Swim Series stop in Richmond in January:

4 months out from the predicted start of Wave 1 of the U.S. Olympic Trials, June 13th, his chances of qualifying for Team USA are looking strong. Behind him, this season is former American record holder and 2016 Olympic bronze medalist Nathan Adrian who posted a 21.98 at the 2020 Stanford Invite.

Curtiss’ lifetime best was from the 2021 Pro Swim Series where he dropped .08 and maintained his place as the 3rd all-time fastest 17-18 year-old in the event. He is only behind the age group times of current American record holder Caeleb Dressel (21.53) and Michael Andrew (21.75).

Dressel’s American record stands at 21.04 which he posted at the 2019 World Championships. Andrew has only logged official times in short course meters this season, according to USA Swimming, so it is unclear where he stands in long course among the field of Olympic sprinting hopefuls. He swam his fastest 50 free in short course meters this season during match 8 of the 2020 International Swimming League (21.18).

Out of the all-time fastest list of American men from all age groups in the 50 meter free, Curtiss is now tied with 2016 Olympian Ryan Held for 16th place. Before his performance at the 2021 Pro Swim Series, Curtiss was tied with four-time Olympic medalist and former world record holder Jason Lezak for 18th place.

Competition year has been significantly limited by the COVID-19 pandemic. Racing opportunities in the United States were especially scarce from March through October of 2020, after which the U.S. Open took place in November. Event rankings with 4 months to go do not encompass the entirety of the competition we might see at the U.S. Olympic Trials in June.

Can’t wait to see what he will do at Trials. He looks like he could be ever faster if his head was just a touch higher so that it didn’t ride under the bow wave he creates.

The 50 is the event with the highest speed therefore drag matters the most. I would assume going under 22 requires some playing with technique and he probably found this head position to work best for him

Some say, don’t mend what’s not broken. But among the swimmers I have watched in practice that calibrate technical details the most are Sarah Sjöström, Caeleb Dressel, Katinka Hosszu, Lilly King…

Possible but unlikely he makes the team. No way he beats dressel, I don’t see him beating Andrew and Adrian and others could also push for a spot

Hot Take: Santo Condorelli switches nationality back to US and sweeps all the events at Trials while sporting the full mustache

I would imagine he will have five more nation changes by the Olympics, finally settling on Equatorial Guinea

These Olympic years traditionally means a handfull breakthrough swimmers. Curtiss could definitely be one of 2021’s Comets.
ᕙ( • ‿ • )ᕗ

So 19.77 SCY translates to 21.87 in LCM? Am I missing something? Was he tapered some for San Antonio?
Also, I agree about the “plowing” through the water & head position in the post of LetThemKick.

Swimming in a high school pool at a high school dual meet in a lane next to a high school female not in a tech suit probably isn’t conducive to fast times. Yes, he put on a suit but he’s likely in the midst of heavy training, so 19.77 seems pretty decent for that setting. For Richmond (not San Antonio), he explained his training to Coleman with a lot of lifting and out of water workouts during COVID. The setting in Richmond was definitely more conducive to fast swimming. And he was faster in prelims there than finals.