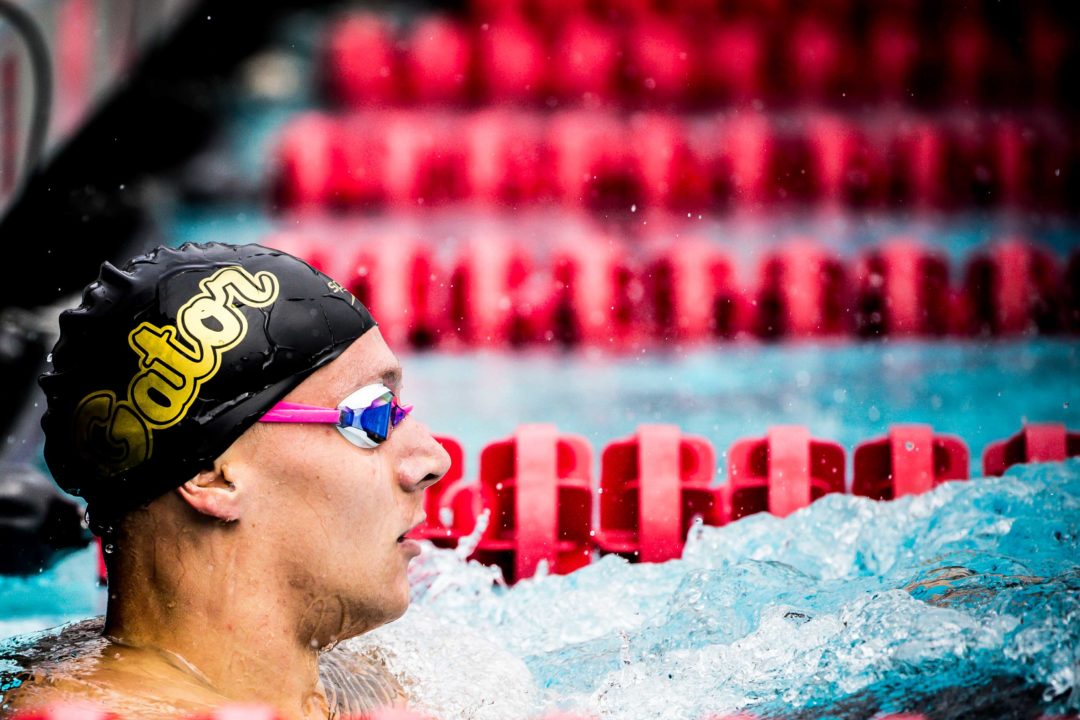 He had a big drop in this event last year as a freshman, cutting over five seconds off of his pre-college best. He’s now seven seconds ahead of his HS best.

For some context, not only is that just a world #1 time, but it’s faster than what it took to win gold in Rio in 2016 (Joseph Schooling’s 50.39, the current Olympic record). Only three men have ever broken 50 seconds in this race: world record-holder Michael Phelps (49.82), Dressel himself (49.86), and Serbian Milorad Cavic (49.95). Counting Dressel’s 49.82 from 2017 World Champs, his swim tonight is the eighth-best performance of all-time.

Wouldn’t that mean the same distance per stroke and just a higher cadence?

Yes. Dps would be the same.

You can’t make this determination without knowing the streamline length and distance off each wall.

Haven’t compared the videos but it also depends on how far they kick out underwater.

On another note, it would be cool to have a site that complies swimming race data like this (stroke count, uw kickout distance, number of dolphin kicks, etc) (I know USA Swimming does it for the National Team members at big meets). Kind of like a box score but for swimming.

Someone also does deceleration analysis, for the 50’s at least. For example, Ervin won at Rio not because he was pulling away (accelerating) from the field at the end, as it appeared, but because he was decelerating less. Would love to know whether the no-breathe/hold on for dear life last 15 meters that Dressel does limits or worsens deceleration compared to breathe-every-stroke-including-into-the-finish Phelps. There’s probably a happy medium.

His rhythm clearly picks up and “accelerates” Watch the end of the 100 free and fly at worlds. Clearly creates separation at the end unlike I’ve really ever seen.

It’s possible if Phelps was underwater off the walls less, but I think they are about the same there

They looked the same. Of course, with his start, Dressel probably needed fewer kicks to get to 15 meters than Phelps did.

Yeah, you’re right, though Dressel’s cadence really picks up when he no-breathes the last 15 meters or so.

It’s a shallow pool, but not sure if it’s considered a fast pool. Would be curious what others now about it.

Someone need to bring a drone to this meet next time.

Dressel has unprecedented sprint speed, obviously, but still short of Phelps record. To me just puts different perspective on how truely fast Phelps was in 100fly.

In a Speedo LZR Racer….nobody has approached Caelebs times without a supersuit. Crocker,Joe, Chad, Phelps, Milak have been in the 50.4-50.6 range like once

Check back with us in 5 weeks. That WR is toast. He’s not peaked for this meet & that first 50 was smooth as butta.

Yep , with Urlando , we are witnessing unbelievable flyers on the rise ….so exciting

I woulnd’t go so far as to say it’s guaranteed to fall this summer; there’s always a chance that something bad could happen between now and the World Championships (I certainly hope not), but the days are clearly numbered for Phelps’s world record in the 100 fly. Probably the same for both the 4x100m freestyle and the 4x100m medley relay.

I wonder if with the ISL, relay world records by teams will supplant those by countries. You could build a relay with the 4 fastest swimmers on the planet on an ISL team someday… But you’d have to have a high-stakes championship for them to all be tapered and at their peak.

Both free relay records could be around for a while

No, that’s pretty much not going to happen.

Look at those times. I’m not saying “no way”, but I’d be shocked if anyone broke that record in the next 6 years, minimum. Teams might get 2 or even 3 of those splits together, but not all 4. It would take a miracle.

You would not be very fun at a party. It won’t be long until some countries have 4 swimmers going under 48 flat start and then it’s just a matter of time getting them going fast at the same meet

I’m here for you buddy

That’s what everyone said after Pan-Pac trials —- just wait for Pan Pacs, he’ll drop like crazy. He’ll go 49.8, but not sure he’ll break it. This was OT’s level rest without a shave to prepare for next year.

He just had one good year and one bad year, hard to say which one is an anomaly.

This is also a good year. It’s not that hard to look at his current in season swims and know this

If I remember correctly people were expecting Dressel to be faster at Pan Pacs than at Nats, but after watching him at Nationals most people’s expectations had been significantly lowered from where they were in spring 2018

Not stating that dressel won’t break WR. He definitely will and to me is expected. Overlooked the tech suit Phelps wore as factor in 100. However, new found appreciation for Phelps in 100fly because he can’t post sub 18 in 50fr.

You know Caeleb will get the early speed from his taper. He was out in 23.33 in Budapest.