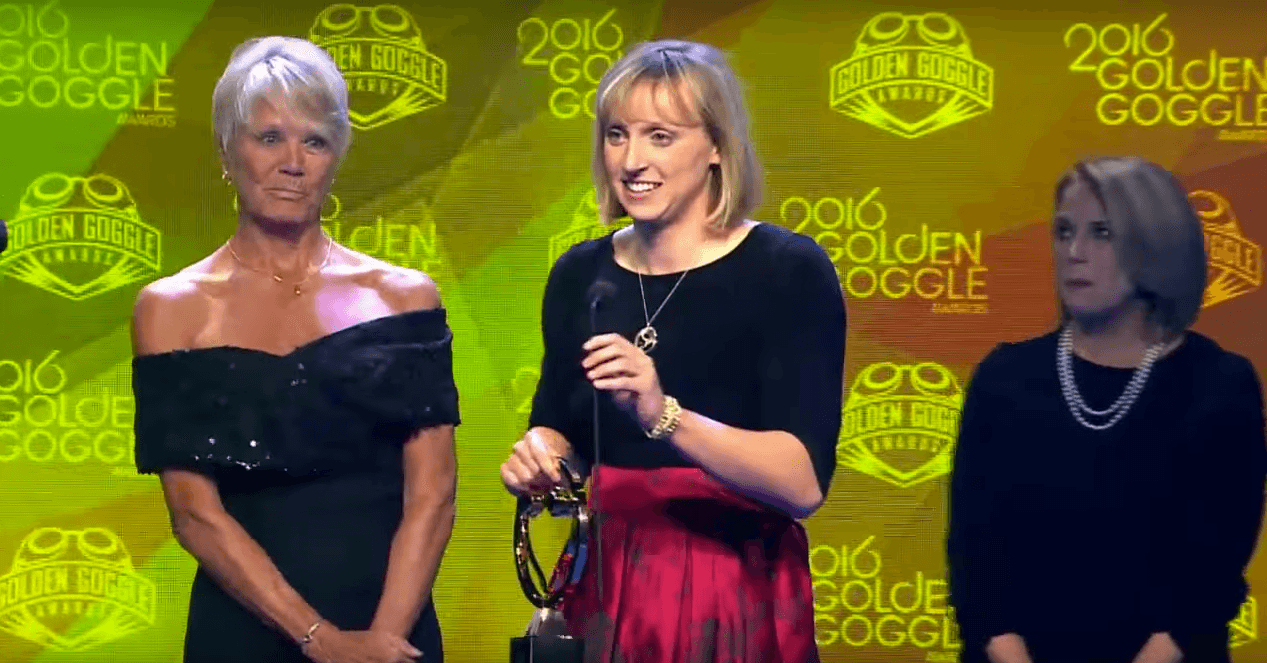 SwimSwam Quiz Time is back with a fun way to find out your on-deck swimmer style. See if we get it right for what you’ll be wearing at your next meet.

The first award of the night goes to Simone Manuel for winning gold in the 100 freestyle in Rio this summer.  Manuel’s victory there was notable for a number of different reasons.  The Campbell sisters of Australia were heavily favored to win, Manuel tied with Penny Oleksiak of Canada, and Manuel became the first African-American swimmer in history to win an individual gold medal at the Olympics.

COACH OF THE YEAR – DAVE DURDEN

Durden won this award for the first time this evening.  Durden has been head coach at Cal since 2007, and this summer, he coached six men to berths on the USA Olympic Team, including individual gold medalists Ryan Murphy and Anthony Ervin, Nathan Adrian(relay gold, individual bronze), Josh Prenot (silver), Tom Shields (relay gold), and Jacob Pebley.

The Impact Award with M. Phelps was astonishingly beautiful to watch , Thank you – What a moment !!!!

Does anyone know where i can find a FULL VERSION both 400 free relays ??? As far as i have researched , i didn’t find any decent ones . Thanks in advance

Yeah, I’d like to know as well. It seems NBC only wants us to watch a part of the relay on youtube.

I know for those of us in the USA with a cable subscription can sign into nbcolympics.com and find all the race videos. Unfortunately, they don’t all seem to be up on YouTube, unlike 2012.

Yes. Hopefully the official olympic channel will post all finals one day.
I’d also like to watch some races in NBC version to see the American excitement.
And to see if Katie Ledecky’s 800 free has been cut…. 🙂

Jean-Michel, I have the French versions of both 4X100 free relays but I doubt it works outside of France.
Women’s race
https://www.youtube.com/watch?v=65EIRIXeCm0

Not fantastic but at least it’s not banned on youtube.
https://www.youtube.com/watch?v=HDX-_I447JE

Thanks BOBO – i just once saw on a South African yutube channel weeks ago the races again – those guys were uploading most of the races in complete versions – but they got down immediately !!! How ridiculous is that to not show entire races for the fans . U are right , u can’t watch them in Belgium .
U had recorded nearly everything on BBC than most of it got lost unfortunately .
Greetings to you

The Olympic channel has all the finals and prelims in their entirety. Go to http://www.nbcolympics.com/video/swimming then scroll down to the bottom and hit the big plus sign. That will open up more of the videos all the way to day 1. However, if you don’t have cable it will eventually time out and ask for you to authenticate and you will need to log in with your cable id. I don’t have cable. I wanted several of the videos so I went to the Olympics site on Explorer and did a screen record of the races I wanted to keep. After it timed me out I did more of them on Chrome and then Firefox. I then waited a week… Read more »

Thanks for compiling the videos.
Abbey tripped over a step. She almost had the fall of the year at the end of the team introduction. She has destroyed the decoration. 🙂
Congrats to these amazing athletes and coaches for another amazing summer of swimming.
Some races will be unforgettable.