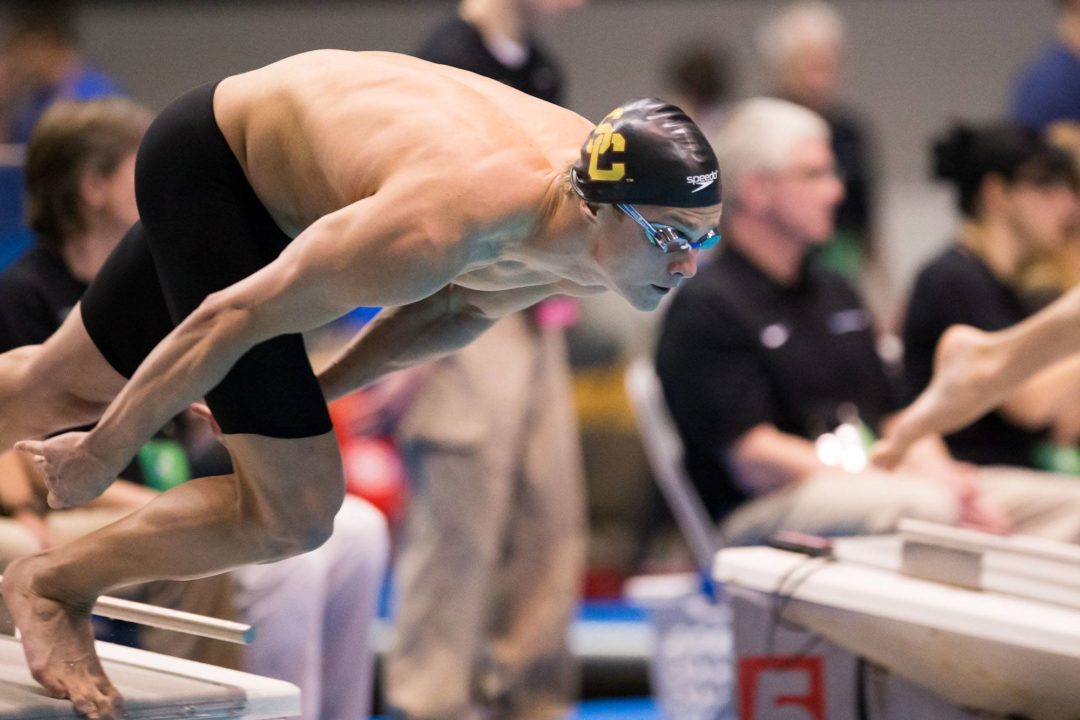 Vlad Morozov now has a record that will officially go on the books - the fastest ever 100 yard freestyle. (Photo: Tim Binning/TheSwimPictures.com)

As Rowdy Gaines said right after his race, this is one we all thought would stand for a while. That is, until we saw the kind of season Vlad Morozov had been having.

Saying afterward that his strategy was to “go out as fast as he can, and see what happens” Morozov did jut that. His feet hit at a 19.14 on the turn: a split that would’ve placed him 3rd in the individual 50 free (and that was to his feet, not his hands) and he was still better than anybody but Auburn’s Marcelo Chierighini on the back-half en route to a 40.76.

That broke the old NCAA and U.S. Open Records of 40.92 set in 2008 by Cesar Cielo, who would go on to break World Records later that year at the Olympics.

Comparative splits between the three fastest swims in history:

Cielo did not break World Records at 2008 Olympics, he did it in 2009 World Championships.

A great swim, but this summer I doubt Vladdy will be making much noise in a long course pool.

cause of his height right?

Curious why you say that–did you watch his swims? He does not gain on turns and underwaters relative to his on-the-water swimming in the way other short-course specialists do. He’s not like a Shields in fly–He surges ahead stroking in a way that should translate well in the longer pool based on what I saw. I’d say his NCAA performance bodes well for WCs and beyond.

And as I type that is an understatement because his 100 free is one of the few swims I’ve watched on tv/live stream that made me shout uncontrollably at the screen. And it was not a short-course-only swim.

What makes you say that?

Sorry, that was directed at Justin.

And Rafael, how’s about we give him that opportunity?

He will have it.. Worlds Champs..

Dang!At last, i made one correct prediction…
His textile best in SCM(45.5) it was a hint of what Vlad is capable of.
Next year, it will be the little fifty… :]

Amazing! Funny that Cielo lowered Adrian’s record by .16 and Vlad lowered Cielo’s by .16. I think Vlad will split under 40 on the relay!

Ryan.. Cielo Record If I recall is Older than Adrian record..

yes. adrian’s record was from ’09, cielo’s was from ’08. seeing as cielo is two years older than adrian it makes it improbable adrians had the record before cielo broke it, then better the american record again

also cielo did the records in textile body suits, so the “who needs suits” don’t really carry that much weight, unless we’re going to lambast thorpe for wearing his bodysuit

Thorpe was the last guy to broke WR is briefs… people don´t give a credit for him because he used a fullbody latter.. and he was 50 flat as 15 year old.. and still… it seems for most he is underrated a lot..

Amazing … with or without the suits, swimmers always find a way to go fast. Vlad is going to be something special, can’t wait to see what he puts up this summer.

Anyone know when this is going to be on TV? I missed the Women’s meet and really want to see this one.