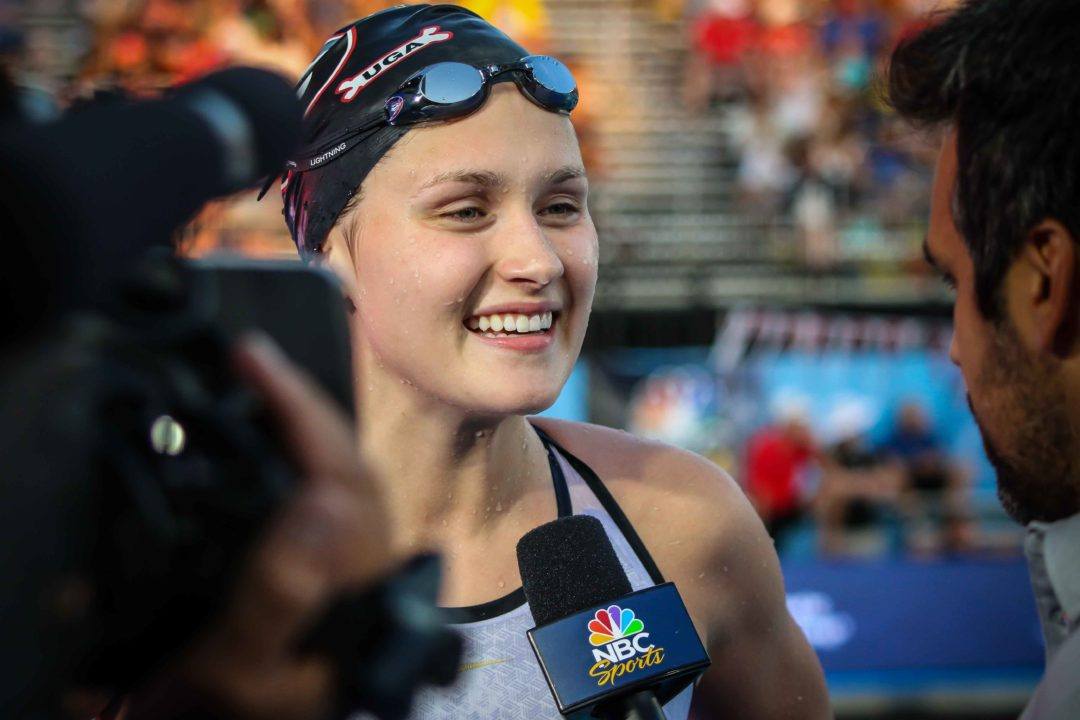 Olivia Smoliga pulled off a big double on day 2 of the 2019 Atlanta Classic at Georgia Tech. A DQ in the 100 back nearly derailed her day, but ultimately she came away with Meet Records in back-to-back races.

Smoliga touched 1st in the 100 back final in 59.27, which was faster than her own Meet Record of 1:00.13 from 2016. She was initially disqualified, however, for a 15 meter violation. After the race, Smoliga protested to the officials, appearing to be showing them video to acquit her, and officials eventually reinstated her result. Meet officials have not said on what grounds the call was overturned, or whether the video they were shown had any impact on the decision.

*update: Smoliga’s DQ has been overturned

Just coming off breaking the 50 free meet record, Olivia Smoliga broke her second meet record of the night with a 59.27. Smoliga was originally DQed for going past 15 meters underwater, but has overturned it after video review.

Scoring the third-consecutive meet record of the night was Olivia Smoliga, who smashed her prelims record of 25.20 with a 25.05. This is Smoliga’s second-best time of the season, just off her 24.83 from the Richmond PSS.

Swimming an in-season best was 17-year-old Kate Douglass, who took second behind Smoliga with a 25.23. Athens Bulldog Natalie Hinds finished in third with a 25.30. Tennessee’s Erika Brown took fourth in the race with a 25.35.

So….. y’all got people there to record interviews but didn’t record any of the races?

Haha true. I would love to see dressels 100 breast

You guys need to get a camera that focuses correctly. The Auto-Focus on the camera was horrible and kept going in and out and you could never clearly see Olivia. Maybe you need to talk to Cody Miller about how to get camera equipment that can properly focus.

Maybe you need to realise that SwimSwam do a great job and we can access all this awesome content for free and so maybe a slightly less entitled tone in your comments might be a good idea?

Or he could post something accurate, which he did….0

There is a ton of Video content on YouTube that is put out by amateurs and they use camera equipment that can auto-focus correctly.