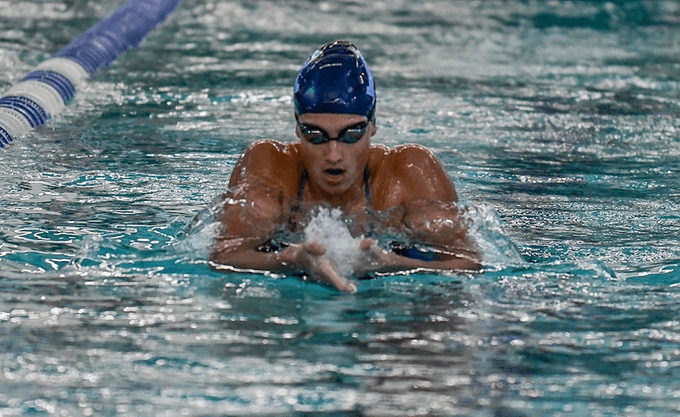 How It Happened
Vermont won each of the first four events of the day, including a 1-2-3 sweep in the 200-yard freestyle, as it handed Rhode Island a 165-132 defeat Saturday afternoon in Tootell Aquatic Center.

Rhode Island (5-2) outscored Vermont 114-109 over the final 12 events, but the early deficit was too much for the Rams to overcome. The visiting Catamounts opened the meet by taking first and third in the 400-yard medley relay, the top two spots in the 1000 freestyle and the top three places in the 200 freestyle. After Kira Parker won the fourth event – the 100-yard backstroke – Vermont was well in front, leading 56-18 in the team score.

Brooke Kelley broke through for Rhody by leading a 1-2-3 finish for the Rams in the 100-yard breaststroke. She edged teammate Mackenzie Thomas by .42 seconds, and Casey Fusco took third place as URI outscored the Catamounts in the event, 16-3. At that point, the team score was 59-34, the closest Rhode Island the rest of the way.

What’s Next
Rhode Island closes out its regular season with a meet at Central Connecticut State on Saturday, Jan. 29.

COACH’S QUOTE
“I was extremely impressed by today’s performance at URI,” said Head Coach Gerry Cournoyer. “These student-athletes competed at a high level. I am looking forward to champs.”

WHO’S NEXT
Vermont will return to action February 10-13 at the 2022 America East Swimming and Diving Championships. WPI will host the meet in Worcester, Mass. Day one of the competition will feature women’s one-meter diving, the 800 free relay and 200 medley relay.