Why the Velocity Meter Matters in Swimming 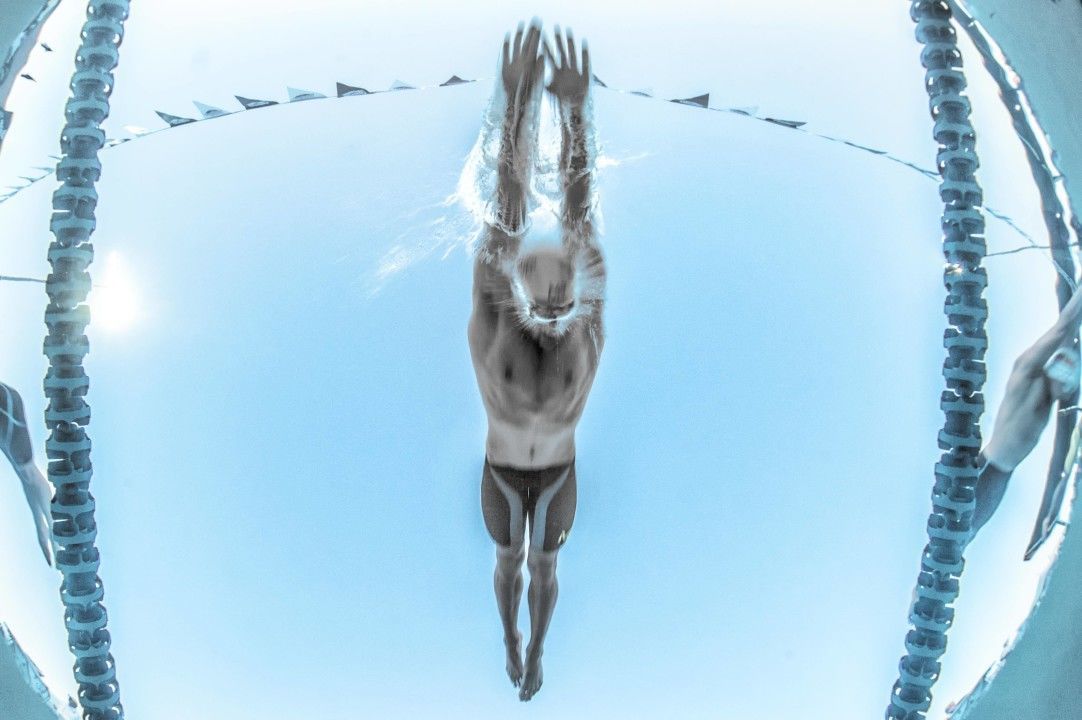 SwimTopia Teams Now Have Easy Access to Adding Team Stores Powered by SwimOutlet to Their Websites.

While the velocity meter is not new technology, at The Race Club we have spent much of the past year understanding how to better use it in order to improve a swimmer’s speed. We spend an average of ten hours performing and analyzing each test. We have learned a lot.

First, technique in the sport of swimming is extremely important; more than we had imagined. With water being some 800 times denser than air, the laws of motion that affect our speed in water come into play at much slower speeds than with sports in air. Significant deceleration can occur very quickly, within hundredths of seconds, with very small adverse changes in our body’s position or shape. The result of high deceleration is slower speed and a greater fluctuation of speed, an inefficient way of swimming. Flow dynamics are also very important and affect our propulsion.

Second, we have learned that by measuring acceleration and deceleration, in addition to velocity, we can more precisely identify poor technique. Peak deceleration, for example, measures the mistake(s) in real time, while trough velocity occurs later as a result of the deceleration. Even though the loss of velocity may occur just fractions of a second after the peak deceleration occurs, for example, the poor technique that resulted in that change may already be gone. By identifying the time where maximum deceleration takes place, we can then more easily find the bad technique that caused it. When looking at moments of peak acceleration, we can also better identify the propulsive forces that resulted at that moment in the higher acceleration and resultant increase in velocity.

Another parameter that we have learned to use is the difference between peak and trough velocities (∆PT). To our knowledge, this data had never been analyzed in swimmers before. The level of peak velocity is a fairly close indicator of the amount of propulsion a swimmer can create on a given cycle. Trough velocities correlate more closely with the amount of frontal drag occurring between propulsive efforts for a given stroke rate or cycle time. The ∆PT is a better measure of efficiency, as the greater the change in velocity that occurs with the swimmer, the more energy required for the swimmer to average a certain speed (law of inertia).

The analysis involves not only measuring the magnitudes of peaks and troughs, but also comparing symmetry (right arm vs left arm) and consistency (does the peak or trough vary much from stroke to stroke or over time). One of the challenges of this analysis is having a better understanding of what is normal or expected for a given age or ability of a swimmer.

For example, in the ∆PT velocity measurement for freestyle, the majority of better distance swimmers seem to keep under .5 m/sec. With elite swimmers using sprint technique, however, we find the ∆PT goes higher (.75 m/sec or higher) from the increase in propulsion and in frontal drag caused by the deeper, stronger pulling motion. In backstroke, the ∆PT’s are lower, likely due to the changes in flow dynamics of the kick on the back compared to the stomach. We have found in backstroke a ∆PT less than .35 m/sec appears to be desirable. For the same reason, the ∆PT is less in dolphin kick under water on the back than it is on the stomach. In flutter kick, a ∆PT of less than .25 m/sec is desirable.

The higher ∆PT measurements are usually accompanied by higher amounts of deceleration and/or acceleration. While we understand the importance of having a lower ∆PT, particularly on events over 50 meters, we also have found that the highest peak deceleration points are the most important single parameter to help us find poor technique. In nearly every case, we feel confident in being able to identify the cause of the deceleration. Often, there is more than one cause.

When going over our VM data with our Race Club members, it is one thing to show a swimmer video of his dropped elbow, elevated head position, overly bent knee on a kick or a hanging foot in breaststroke or fly, and explain that you think it is bad technique. It is quite another to show a swimmer that as a result of that mistake, the acceleration went from 10 m/sec² (increasing speed) to a deceleration of -10m/sec² (losing speed) in less than .06 seconds. That is not an unusual scenario.

If nothing else, each swimmer doing the VM study has a new respect for the extreme sensitivity of swimming technique. I call swimming a sport of millimeters, tenths of seconds and degrees. Drop the elbow a few millimeters, for example, and the frontal drag goes way up. If a swimmer is a tenth of second late in initiating the push back from the breaststroke kick or in performing the second hard down kick in fly, the swimmer misses the coupling effect of the body motions and loses out on the additional propulsion. For every degree of external rotation of the hip, there may be 5-10 percent more propulsion from the breaststroke kick with the same amount of effort. In swimming, little things matter.

There is no mercy in the water; very little margin of error. In my experience, the Velocity Meter test provides the most important information we have available to help you swim faster. I hope that you will come to Islamorada or to Coronado and allow us to test you.

Because Life is Worth Swimming, our mission is to promote swimming through sport, lifelong enjoyment, and good health benefits. Our objective is for each member of and each participant in The Race Club to improve his other swimming performances, health, and self-esteem through our educational programs, services and creativity. We strive to help each member of The Race Club overcome challenges and reach his or her individual life goals.

instruction, video, fitness and health programs for swimmers of all ages and abilities. Race Club swim camps are designed and tailored to satisfy each swimmer’s needs, whether one is trying to reach the Olympic Games or simply improve one’s fitness. Our programs are suitable for beginner swimmers, pleasure swimmers, fitness swimmers, USA swimming or YMCA swimmers, or triathletes; anyone who wants to improve swimming skills. All of our Race Club m embers share an enjoyment of being in the water and use swimming to stimulate a more active mind and body.

Sounds a lot like Genadijus. Dr Gs test seems more usable and possibly simpler, faster (less expensive as he will travel). Plus it is Dr G!

Acceleration and velocity don’t have the same units so how is deltaPT a useful measurement?

Delta PT is the difference in peak and trough velocities and is therefore a unit of m/sec, not m/sec squared. It is useful in that the larger the number, the more slowing and speeding up one is doing, which does not conform to the law of inertia. Since we measure the trough preceding a strong propulsive force, it also correlates to some degree with the amount of propulsion from that particular pull or kick.

the velocity meter? I love using equipment in workouts; pullbouys, paddles, snorkels, fins, I love ’em all. But I never heard of a velocity meter. where can I get one? How do I use it?

its not a piece of a equipment for us peasants. Only the most sovereign in the sport get to use them.

The VM technology synchronizes video images with the swimmer’s velocity, acceleration and deceleration at any given time. The software enables us to analyze each stroke down to .04 seconds in time. Our hardware and software come from Italy and USA…but no one is analyzing swimmers like we do.

The University of Tennessee has been doing this for years.

Yes, we collect and analyze the data unlike anyone else is doing or has done.

BTW…anyone can come to Islamorada FL or Coronado CA to have these tests performed.