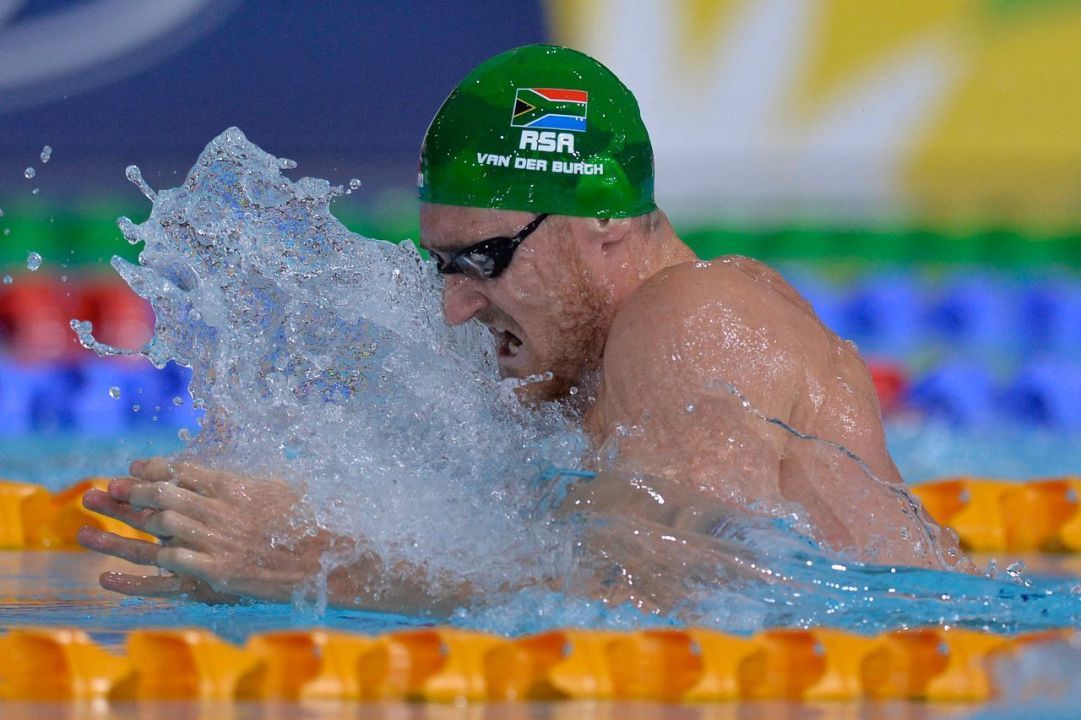 Finals on Day 2 of the 2015 Sette Colli Trophy carried the momentum of the swift swims we saw in...

Finals on Day 2 of the 2015 Sette Colli Trophy carried the momentum of the swift swims we saw in the morning, highlighted by two additional meet records falling over the course of the evening.

While it appeared from the morning prelims that tonight’s battle for the 200m butterfly title would indeed be between USA’s Cammile Adams and Canada’s Audrey Lacroix, the finals race was instead a charge to the finish between Adams and Hungary’s Zsuzsanna Jakabos.  Adams scored almost the identical time from her morning swim, shaving off just .09 of a second to earn the A-Final win in 2:07.52.  Jakabos, however, hacked over four seconds off her morning effort to give Adams a run for her money at the end, touching narrowly in second place with a time of 2:07.93 to squeak into the world’s top ten. Jakabos’ Hungarian teammate, Liliana Szilagyi finished in 3rd with her time of 2:08.86.  Lacroix settled for fourth tonight (2:09.26).

Italian Elena Gemo had put the women’s 100m backstroke Italian record on notice this morning, as she clocked a smooth 1:01.17 in prelims for the top seed.  Gemo delivered on her promising set-up swim by surpassing the record tonight, snagging victory in 1:00.22.  Her new mark just slid under the previous Italian record of 1:00.25 held by Arianna Barbieri from 2012.  Scotland earned its first Sette Colli medal, as Kathleen Dawson claimed second place as the only other swimmer to dip beneath the 1:01-mark, touching in 1:00.93.

The women’s 100m freestyle final saw the same top four finishers from the morning prelims, but they shuffled into a different order in the primetime race.  The Swedish warrior, Sjostrom topped the field in a thrilling 53.00, a new meet record, making her the 3rd-fastest female thus far in 2015.  Dutch sprinter Ranomi Kromowidjojo, who was the owner of the 53.09 meet record Sjostrom overtook, was runner-up tonight in her own solid effort of 53.65, over a second faster than her 54.76 morning swim.  Also landing on the podium in 3rd place was Italy’s Erika Ferraioli, who threw down a season best time of 54.31.  Ferraioli’s swim was just .01 shy of matching her lifetime best of 54.30 she earned in December 2014.  Federica Pellegrini settled for fourth in the race, while Canada’s Chantal Van Landeghem wound up fifth in 54.42 and 54.59, respectively.

Ruta Meilutyte got the job done once again in the sprint breaststroke event, swimming away with the meet title in a smooth 30.07.  After tonight’s swim, Meilutyte now owns the fastest two times in the world in the event, with her sub-30 swim (29.88) topping the globe from last week’s Mare Nostrum in Canet.

Hungary’s Bence Biczo kicked off the men’s events with a win in the 200m butterfly.  His first place tie of 1:56.47 was enough to hold off the field, as well as earn Biczo the 17th-fastest time of the year.  Italy’s Francesco Pavone was the only other swimmer under 1:58, clocking a 1:57.92 for the runner-up spot.

Simone Sabbioni led an Italian sweep of the men’s 100m backstroke event, taking the 2015 Sette Colli title in a time of 54.15.  Sabbioni recently scored his lifetime best, a 53.49 he clocked just in April of this year in Riccione. Teammate Christopher Ciccarese nabbed 2nd place tonight in a time of 54.51, with Luca Mencarini clearing 3rd in his time of 54.71.

Italy immediately followed that performance up with a 1-2 finish in the men’s 400m IM event.  Federico Terrini touched the wall in a time of 4:19.07 for 1st, while his countryman Giorgio Gaetani snagged 2nd in 4:20.18.  Tough enough swims to get on the board tonight, but quite a ways off of a world top 25 times that are significantly further beneath the 4:20-range.

Dutchman Sebastiaan Verschuren landed atop the podium in the men’s 200m freestyle, registering a time of 1:47.88 to earn the victory.  A solid time for Verschuren, although he was almost two seconds faster at April’s Eindhoven cup where he scored a 1:46.07 for his best time so far this year.

South Africa’s Cameron Van der Burgh closed out the night with a new meet record in the 50m breaststroke, surpassing the record he had already set in the morning session.  Van der Burgh bettered his 27.24 by racing to a new mark of 27.01.  Van der Burgh is inching ever closer to the world leader, GBR’s Adam Peaty, whose time of 26.88 still stands as the fastest of 2015.