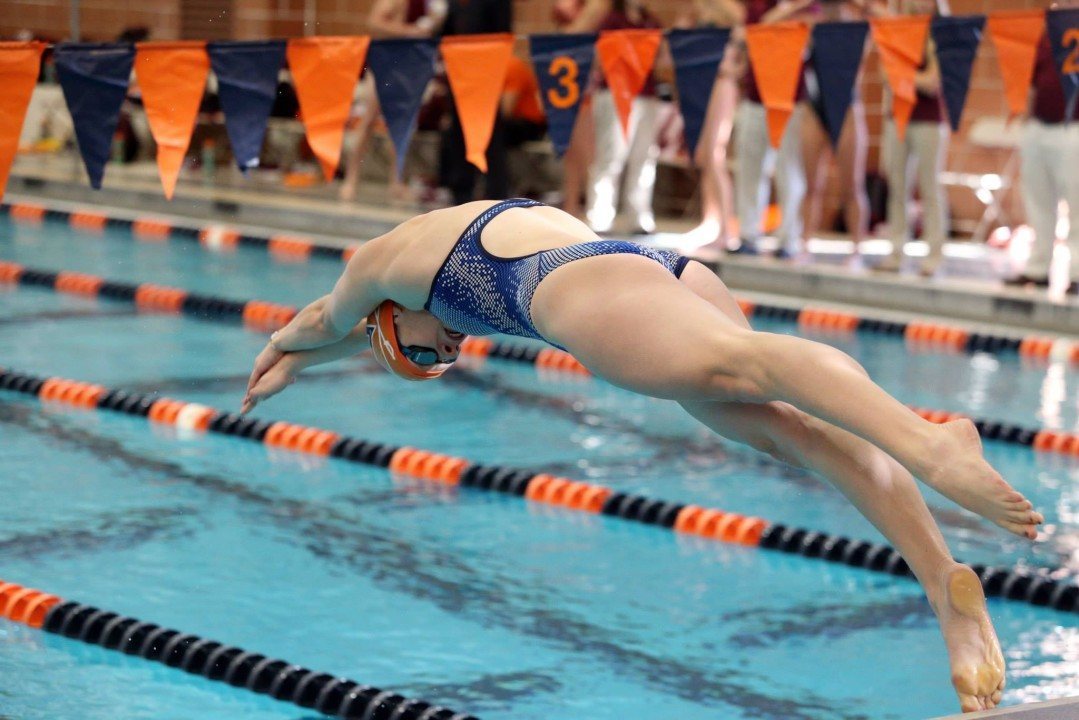 UVA and VT both experienced wins at the end of this weekend's two-day double: the UVA women were victorious over the Hokies, while the VT men topped the Cavaliers in the men's meet Current photo via Virginia Cavaliers Facebook Page

This weekend in Charlottesville, Virginia, ACC foes Virginia Tech and the University of Virginia battled in a two-day dual meet. For results from the first day of competition, visit http://swimswam.com/uva-women-vt-men-lead-first-day-two-day-dual/.

In addition to winning eight events this morning, the UVA women also swept a few of their wins with two athletes finishing in a row. In the women’s 50 freestyle, Ellen Thomas won the event in 23.41, but she was followed by her teammate Caitlin Cooper (23.68) who claimed second. The Cavaliers also achieved a 1-2 finish in the 100 backstroke, when Courtney Bartholomew touched in 52.60 and Jen Marrkand in 55.82. Finally, in the 400 freestyle relay, UVA’s A and B relays touched in first and second. The top time of the event, 3:23.68, belonged to the A relay, comprised of Hanne Borgersen, Ellen Thomas, Ellen Williamson, and Leah Smith. The B touched just tenths of a second later, in 3:23.80.

In the men’s meet, the Virginia Tech swimmers continued their control of the meet, winning seven of the nine total events. The UVA men claimed only the 200 breaststroke (Yannick Kaiser in 2:02.15) and the 400 IM (Brendan Casey in 3:59.71 – almost three seconds ahead of the next finisher).

Virginia Tech’s wins included two in which they swept the top two spots. In the 100 backstroke, Collin Higgins won the event in 48.79. He was followed by his teammate, Robert Owen, who finished in 49.94. Higgins and Owen were the only two backstroke swimmers under 50 seconds at the meet. The second Hokie sweep arrived in the 100 butterfly. Morgan Latimer touched in 48.43, almost two seconds ahead of the rest of the field and the only butterflier under 50 seconds. Drake Becksted, also of Virginia Tech, took second in 50.05, holding off Virginia’s John Denning (50.50).

The University of Virginia will next take on the University of North Carolina at home in Charlottesville this upcoming Saturday, January 24th. This will be their final dual meet of the season. Virginia Tech will also compete again on Saturday the 24th. The men’s team will take on Georgia Tech and UNC-Wilmington while the women will challenge Miami. This meet will take place at Christiansburg Aquatic Center in Blacksburg, VA.