USC’s Catherine Kase Moves to Boise, Will Focus on Open Water Through 2021 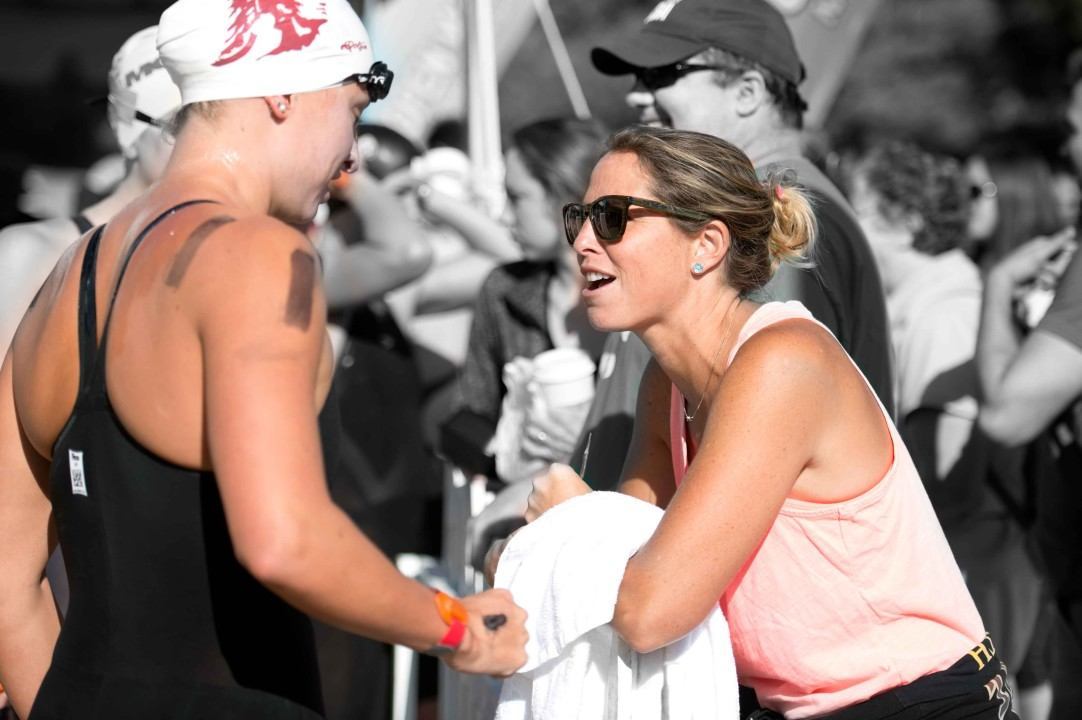 Kase, the 2021 Olympic open water coach for Team USA, will see that role through then "see what the universe holds" regarding further coaching plans. Archive photo via Mike Lewis/Ola Vista Photography

Her husband – former UCLA football player George Kase – and his company made the decision to move in late February to early March, and Kase told the team she was leaving in early April. The 2019-20 NCAA season was her 12th with the program and third as associate head coach.

“The timing of my announcement to the team (early April) was to NOT adversely impact our swimmers before Conference and NCAA meets,” Kase wrote in an email. “There was a lot of uncertainty for our athletes with Dave [Salo]’s departure, the abrupt ending of our season, and ultimately the postponement of the Games.”

Salo announced in January that he would step down from his position and focus on training Olympic hopefuls after the collegiate season.

Tuesday, USC announced the hiring of Northwestern head coach of two years Jeremy Kipp as the next head coach of the Trojans’ program. Kipp was an assistant at USC for eight years prior to his run as a head coach, leaving Kase – who many thought to be a strong candidate for Salo’s job in her own right – in an intriguing position should she not have already made the decision to move.

“The program at USC has a long and storied record,” Kase added. “I regret not being able to remain with the program, but know Coach Kipp and his staff will continue the traditions of excellence.

In November 2019, Kase was named head open water coach for the 2020 (now 2021) United States Olympic Team – her second time holding the position – and will see that role through, she said. Kase won’t pursue new college coaching positions in the meantime, and following the Tokyo Games, “will see what the universe holds” in regard to her plans, she said.

Kase’s confirmed departure also raises questions regarding distance and open water rising star Erica Sullivan, a USC commit who graduated from high school in 2018 and deferred her college start to train for Tokyo. With the Games postponed, Sullivan told SwimSwam she would wait on the coaching hire to decide whether she will still attend this fall, and with Kipp’s hire, says she’ll take a week or so to mull her decision.

I’m happy for Catherine, but I hate that our profession is potentially losing another great coach.

Best of luck in your next chapter, Catherine!

Agreed. Although the article is not 100% clear about this, it seems she left because of family/business reasons, not because she didn’t get the head coach position, but correct me if I’m wrong.

Boise is an up and coming city and business friendly too. Good move from a business perspective.

History what it is, not surprising that someone with “Irish” in their name would tout the city with the World’s Largest Potato.

Or maybe just a reference to Irish loving potatoes, and not a reference to famine, I mean if we don’t immediately go to the worst possible meaning and instead assume the most common.

@ol’longhorn I’m embarrassed that I laughed at your comment and will now work on becoming a better person.

Hahaha, I’ll give it to OL’ Longhorn, that was actually funny. 🙂

And they have the best street market in the United States.

I like Boise very much, and I don’t even ski.

Great coach. Hope that someday she returns to college coaching.