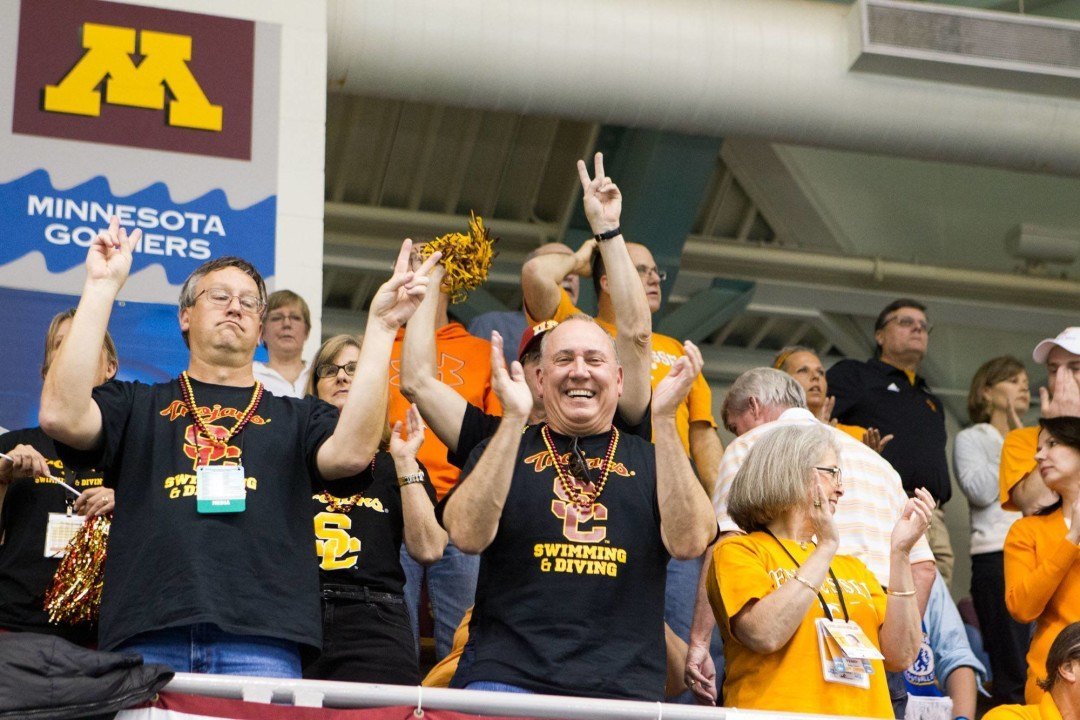 The University of Southern California men’s swimming and diving team scored a stunning victory over conference power California, 149.5-148.5. The win was the first time that USC has bested Cal in a dual meet since 2000. While the annual Cal-Stanford dual meet is one of the top rivalry meets in college swimming, this meet has now ascended to the same level. USC will swim Stanford today in their final home meet of the season.

Both teams traded impressive times back and forth all evening. The winning times were in many cases in the vicinity of times that should qualify for the NCAA championships. Cal led off the meet by blasting a 1:25.39 in the 200 medley relay. The most outstanding split came from Ryan Murphy, who gave them a huge advantage with his 21.24 backstroke lead off. Murphy would go on to win the 100 backstroke in 45.85 and 100 freestyle in 43.86.

The freestyle duo of Reed Malone and Pawel Furtek played a huge part in securing the win for the Trojans. Furtek won both the 1000 and 500 freestyle, with Malone taking the 200 free to go along with a second place finish in the 500.

But the biggest difference in score came from the diving portion. USC went 1-2-3 on both boards, creating a huge advantage for them on the day. Collin Pollard won the 1M while Deon Reid was tops on the 3M.

The meet featured a number of races that should play out again at both the Pac-12 Championships and NCAAs. Carsten Vissering took a big victory in the 100 breaststroke, blasting a 53.0 for USC. Josh Prenot of Cal would battle back in the 200 breaststroke to dominate with a 1:55.4. Andrew Seliskar was solid for Cal, capturing the 200 fly easily and tucking in behind teammate Justin Lynch in the 100 butterfly.

But ultimately the meet would come down to the final relay. Each team employed a different strategy with their relay order. Cal put their biggest weapons up front, leading off with Murphy, followed by Tyler Messerschmidt. This gave the Bears a half second lead, one which they would retain going into the anchor leg. USC used a more traditional relay lineup, saving their best split for last. Freshmen sprint specialist Kyle Grissom uncorked a 19.6 split, a split Seliskar could not hold off. That gave USC the win in the race and the meet.

Like USC, Cal has one more meet against Stanford, but they will not swim them for two weeks. The Trojans and Bears should both be in contention for the Pac-12 Championships next month. USC Men won last year after a long drought.

if Carter and Condorelli were on the team this year, SC would be really good

maybe but are other teams dealing with these scholarship issues?

Does anyone know why Long Gutierrez sat out this meet? He would’ve been a game changer

They said on the Pac-12 broadcast he was having an issue with his knee, so he didn’t make the trip to Southern California.

That’s a shame, hopefully he’ll be healthy and ready to go for Pac-12s and NCAAs.

It’s a great win for the Trojans for both swim and dive! Let them enjoy the sweet taste of victory! It’s been a long time coming. Congrats! Now on to Stanford today and then the big dances! ️️Fight on! ✌️✌️