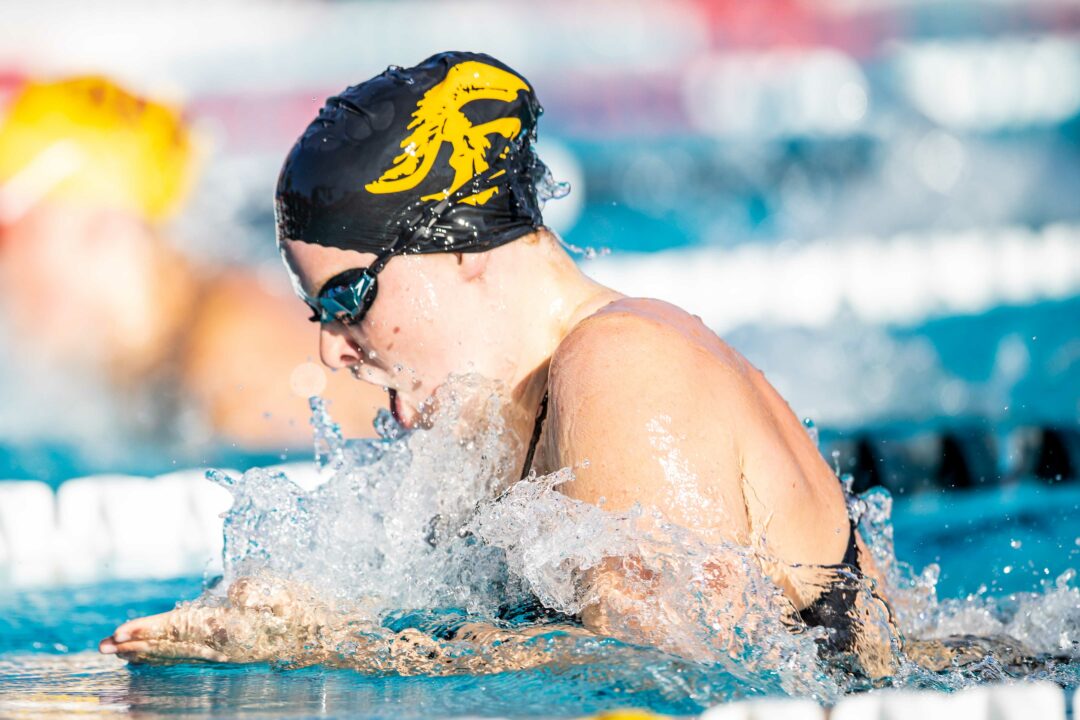 Kaitlyn Dobler was on fire in the women's breast events, blowing away the field in the 100 breast with a 57.95. Stock photo via Jack Spitser/Spitser Photography

USC hosted their annual Trojan Invite this past weeked at the Uytengsu Aquatic Center. The hosting Trojans also won the meet, which featured UNLV, TCU, and UCSD. This was a test for USC, as it was their first meet since head coach Jeremy Kipp was placed on administrative leave.

Calypso Sheridan, who followed Kipp to USC from Northwestern, had a great first meet with the Trojans, winning all 3 of her individual events, and swimming a personal best. Sheridan, one of the top IMers in the NCAA this season, swept the women’s IMs this past weekend. She clocked a very quick October time of 1:55.76 in the 200 IM, getting out to a brutally fast 53.51 on the first 100. She then swam a 4:07.52 to win the 400 IM by over 6 seconds.

Kaitlyn Dobler was on fire in the women’s breast events, blowing away the field in the 100 breast with a 57.95. She got out to a blistering-fast start, splitting 27.35 on the first 50 of the race. The 57.95 marks an NCAA ‘A’ cut, meaning she’s automatically qualified to swim the event at NCAAs now. Additionally, USC now has an individual ‘A’ cut coupled with a relay ‘A’ cut, which means that the Trojans will now be eligible to swim any relay in which they have a ‘B’ cut at NCAAs. Dobler then went on to swim a 2:11.63 in the 200 breast, finishing 2nd to teammate Isabelle Odgers (2:09.27).

nothing wrong with that, rules are rules and people are different, age is just a number and does not give any indication of maturity, just like you with your and level of commenting.

Wow what a blazing fast time at the start of the season! Looking like it’s going to be a great race for the title against Sophie Hansson come NCAA’s

Fast starts are great if they indicate a training schedule producing solid long course preparation during the summer. But I’m always hesitant about “jackrabbit” starts that aren’t sustainable – nothing “left in the tank” for the big conference and NCAA champs in the Spring of 2022. But when both Trojan Mens and Womens teams fininished out of the top 20 for 2021 there’s only one way to go: up.

It was a “blistering fast start” because it was timed perfectly off the blocks. Reaction time had to be just north of zero. And if Dobler didn’t have enough “left in the tank” she wouldn’t have finished in the top 5 for the 100m breaststroke at Trials.