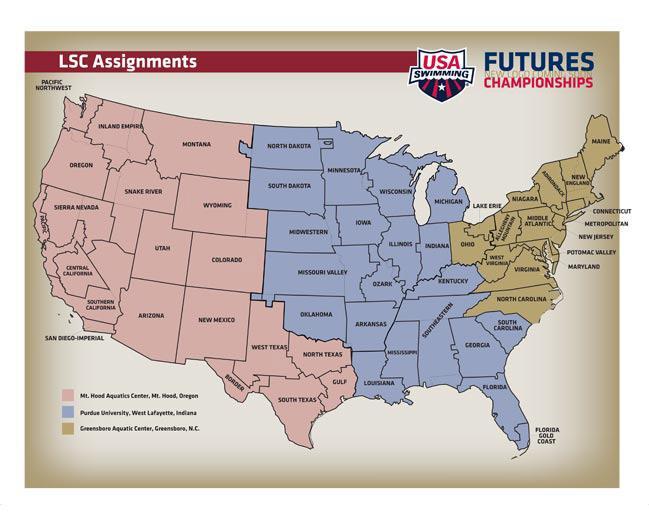 The three meets were designed with the focus of having a championship meet for swimmers who didn’t qualify for Junior Nationals.

Erica Wirth made a huge drop in the women’s 800m freestyle to take home the gold medal with a very swift winning time of 8:50.63. She won the race by almost seven full seconds, taking down Emma Skelley who touched in at 8:57.54.

Both leaders dropped 11-seconds in order to grab their podium placements. Rounding out the top three was 17-year-old Bryanna Cameron in 8:59.51.

That time for Wirth was the fastest out of all three futures meets.

Trevor Leland kept the theme of big time drops rolling in Greensboro, sporting a 15:50.99 to win the men’s 1500m freestyle. Dropping 21-seconds, he took down Dylan Cudhay who also managed a large drop taking 14.5-seconds off his seed time.

Sixteen-year-0ld Haley Yelle took home a comfortable win in the women’s 800m freestyle, knocking 7.6 seconds off her best time to win the event in 8:51.61.

In the men’s 1500m freestyle final, 17-year-old Shane Forker managed the fastest time in the distance swim out of all three futures meets.

Winning the women’s 800m freestyle in Indiana was Emily Meckstroth. Meckstroth was the second fastest overall from any of the futures meets, rocking an 8:51.02 at the touch.

Elizabeth Walker finished behind her in 8:53.88, keeping things close. The two were well ahead of the remaining competitors as Caitlyn McHugh managed a third place finish with an 8:58.87.

Jackson Gunning was the only swimmer under 16-minutes in the men’s 1500m freestyle final in Indiana. Gunning put together a swift 15:59.41 time to drop a massive 33-seconds off his seed time and claim gold.

Gunning won by a long-shot as well, beating James Koval en route to a best time. Koval also made a large drop to better his seed, swimming a 16:08.10.

Hayden Curley rounded out the last podium spot with a time of 16:12.11.

Where can you get the results from the Purdue Futures meet?

Congratulations to my grandson, Jackson Gunning! So proud of you!