USA Swimming Announces Duel In The Pool Roster; No Phelps Or Ledecky 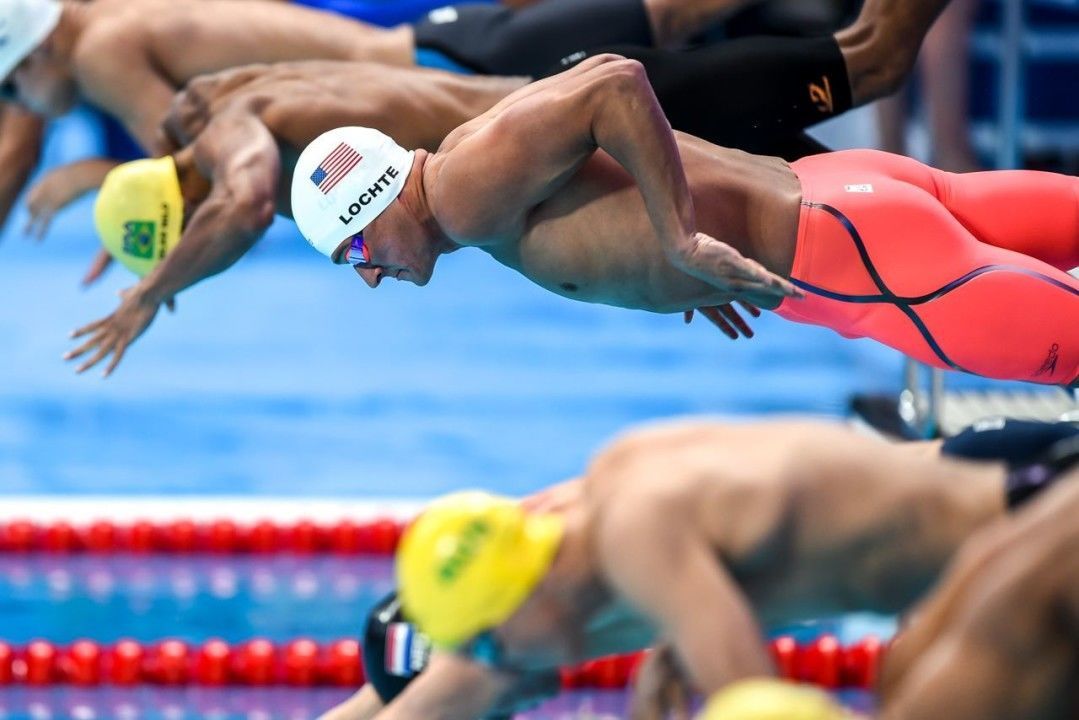 The Indianapolis team will be lead by Ryan Lochte, Missy Franklin, and Simone Manuel, the hero of the 2013 Duel in the Pool Team. Archive photo via Peter Sukenik/www.petersukenik.com

With the 2015 Duel in the Pool less than two months away, USA Swimming has released their men’s and women’s roster. 36 men and women will represent the United States on December 11th and 12th at the IUPUI Natatorium in Indianapolis as they take on the European All Stars in short course meters. The team will be coached by Georgia’s men’s and women’s head coach, Jack Baurle.

There are a ton of big names on the roster, but the two biggest names in American swimming right now, Michael Phelps and Katie Ledecky, are not included on the roster.

The United States team will rely on the leadership of Olympic medalists Ryan Lochte, Nathan Adrian, Natalie Coughlin, Missy Franklin, Jessica Hardy, Caitlin Leverenz, Lia Neal, Conor Dwyer, Nick Thoman, Tyler Clary, and Matt Grevers as they compete in this special dual meet format. Simone Manuel, the hero of the 2013 Duel in the pool, is also on the roster for this year’s meet.

Claire Adams, the 2015 national champion in the 100 and 200 backstroke, will be competing in her home pool. She trains with Carmel Swim Club which is just north of the IUPUI Natatorium, where she competes several times a year.

“The Mutual of Omaha Duel in the Pool is an exciting format for the athletes, fans and viewers, where our sport’s most decorated athletes line up with some of USA Swimming’s future stars,” USA Swimming National Team Director Frank Busch said. “I’m looking forward to watching this group compete against a talented European roster, and the experience gained in Indianapolis will be key heading into an Olympic year.”

The 2013 meet was the most exciting meet to date, ending in a tie after the last event. The meet was decided by a mixed medley relay for 1 point to break the tie. The Americans put up Eugene Godsoe, Kevin Cordes, Claire Donahue, and Simone Manuel against Chris Walker-Hebborn, Damir Dugonjic, Jeanette Ottesen, and Fran Halsall.

With both squads opting to put their two men first and their two women at the end, there was no obvious advantage. On paper, Godsoe had an edge on Hebborn, Cordes had a slight edge on Dugonjic, and Ottesen and Halsall at the end both had an edge on their American counterparts.

The meet couldn’t have asked for a more ideal ending, with two well-matched relays, and everything on the line.

It was a close race throughout, but at the wall, the Americans touched in a new World Record of 1:37.17, with the Europeans taking 2nd in 1:37.37. That kept the Americans’ streak alive, and won the 2013 Duel in the Pool for Team USA.

“The selection of the Team will be at the discretion of the National Team Director and the Head Coach in order to field the best team possible. Athletes who have a Qualifying Time in any event will be considered for selection. Selection will be based on, but not be limited to: personal best performances, individual workload, other recent results and performances, consistency of performances, fatigue, health, fitness levels, training preparation, attitude and team chemistry. In addition physical and mental preparation of athletes in conjunction with their international and national experience, strategy of the sport, ability to score points in a duel meet situation and need to fill the team in order to win the Competition may be used for selection to the Team.”

No Ryan Murphy and Allison Schmitt??

If Phelps is on the list, Schmitt will be on the list too(same group), since he is not……
Ledecky didn’t perform well last time, thought she will make a revenge this time.
Don’t know how the US will do in the distance freestyle……Europe sweep all the point last time.

On the women’s side, we have Leah Smith who I think can prevent a sweep. On the men’s side we have Jaeger and McBroom which puts us in a pretty good position.

IIRC, Ledecky got sick as a dog on the flight over to Scotland to the point where she had to scratch the 800 free. Don’t think she’s done a SC meet healthy and fully tapered since London so it’s hard to say how much of a difference there is for her between big and little pools.

I wish we had a duel against the Aussies.That would be fun.

didnt we before? took place in cali right? or am i imagining things.

Duel in the Pool used to be US vs Australia for a few years if I remember right.

Thats what i thought, glad to know i’m not crazy.

You’re not crazy. It was either the very first one ,or one of the first ones, that was in Indianapolis and strictly US vs Aussies

Aren’t finals around that time? I am sort of surprised that Ryan Murphy is not taking a redshirt year to focus on the Olympics but he would know best what is best for his chances.