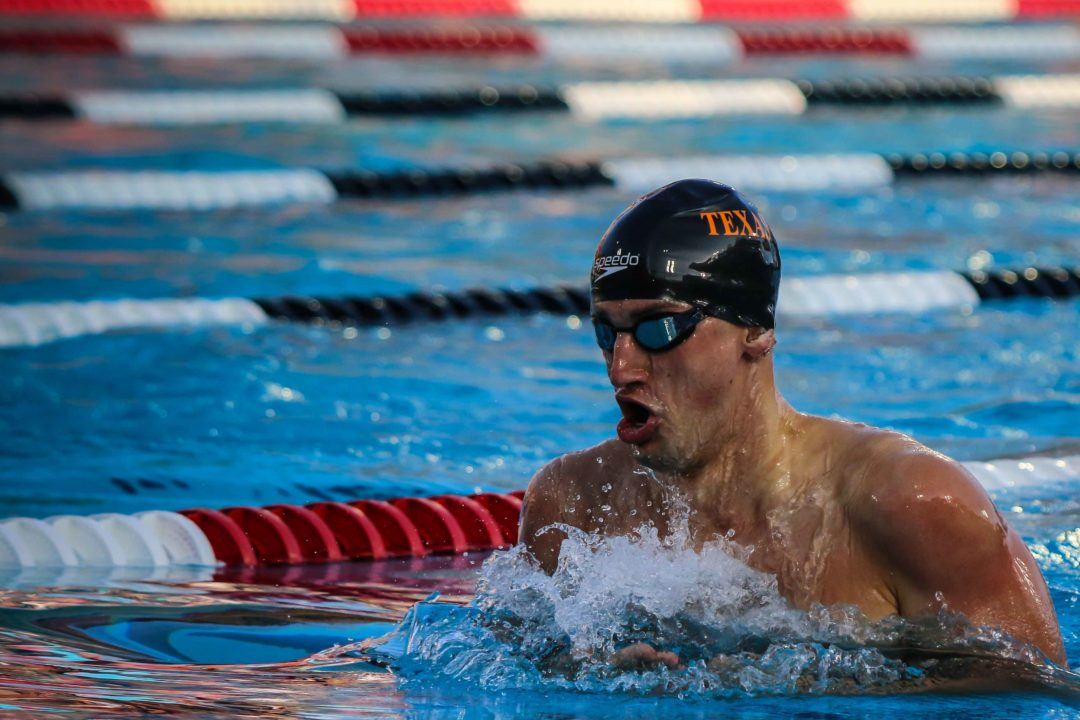 USA National Teamer Andrew Wilsonset a new personal best time of 2:07.77 in the finals of the 200 breast at the Tokyo World Cup stop. Current photo via Jack Spitser/Spitser Photography

USA National Teamer Andrew Wilson has a strong summer, and that trend continued Sunday, as he set a new personal best time of 2:07.77 in the finals of the Tokyo stop of the World Cup in a gold medal effort.

That time shaves 0.19s off his previous best time, a 2:07.96 from the World Championships less than two weeks ago. He swam that time in the semi-finals at Worlds, putting up the 3rd-fastest time in the semis. He couldn’t quite match that time in the final, going 2:08.10 and taking 6th. Even matching his semi-finals time wouldn’t have improved his overall finish, and it took sub-2:o7 to medal at Worlds, but regardless, Wilson has been trending the right direction this summer, after not registering a personal best in this event since 2017.

Wilson was already 4th all-time among US men in this event, but today’s swim edges him closer toward the top three spots.

Wilson also holds the top time among USA swimmers this season, although Licon will be swimming this event at the Pan American Games, which start this week in Lima, Peru. Wilson also hold the top time for USA men in the 100 breast this season; that time of 58.95 from Worlds ranks him 3rd all-time for USA men, behind only Cordes and Cody Miller, both of whom will be swimming that event at Pan Ams.
While Wilson wasn’t that much faster today than he was at Worlds, it’s worth noting that several prominent USA swimmers, including Allison Schmitt and Jack Conger, have been faster at either USA Nationals or the World Cup than they were at the World Championships.

Breakout season for him, right on time for an amazing Olympic year.

Shots fired across the Licon bow.

He is definitly positioning himself as the best Us breastroker this year – going into next year OT . Well done Andrew !!

VERY IMPRESSIVE! Josh Prenot is in danger of losing his spot!! Nic Fink, I believe it’s your turn to have a breakout swim! kill it in Pan Ams!