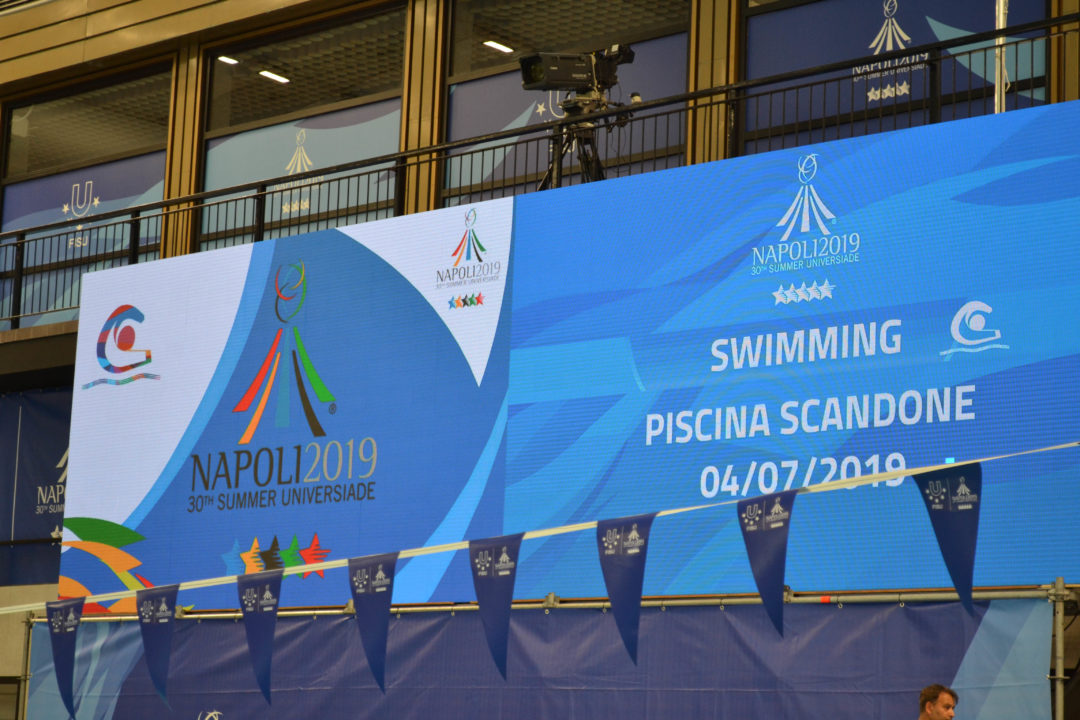 According to the head of the United States' liaison organization to the World University Games, a likely scenario is Germany hosting in 2025 and the US in 2027. Stock photo via Giusy Cisale/SwimSwam.com

The finalists for hosting the 2027 World University were confirmed Thursday morning to be North Carolina, USA, and Chungcheong, South Korea.

Rich Perlman of the Sports Examiner is reporting that the United States is planning to launch a bid for the 2027 World University Games (Summer Universiade).

The World University Games, which has both a summer and winter version, is held every 2 years. With almost 6,000 athletes from 118 nations participating in 18 spots and 220 events in the last edition in 2019, it is the 2nd-largest multi-sport event in the world after the Olympic Games. Prior editions have been even bigger, with the 2017 Games in Taipei (Taiwan) drawing more than 11,000 participants and the 2015 edition in Gwangju, South Korea drawing almost 13,000. By comparison, 11,238 athletes participated in the 2016 Olympic Games in Rio.

Designed for university students (which takes on different definitions in different countries), the summer event was hosted in the United States just once in its history: in 1993, when Buffalo, New York staged the event.

The United States is the most-decorated nation in the history of the event, having won 522 golds among 1,411 total medals in the event’s history. The next-closest nations are China (447 golds) and Russia (1,224 total medals).

According to Perlman, a conversation with two leaders of the US-IUSF organization that governs American participation in international university sport, the organization is looking to push forward its place in the American sports scene.

The U.S. is also planning to participate in the 2021 Winter World University Games in Lucerne, Switzerland, in spite of the ongoing global coronavirus pandemic. That event is scheduled from January 21-31.

US-IUSF president Dan Guerrero hinted that the 2025 edition might be hosted in Germany.

Recent/Future Hosts of the Summer Universiade

*The 2019 edition was originally scheduled for Brasilia, but after financial problems, bidding was reopened.

Why not the World Championships? Anyone have insight into my question? I know that we were supposed to host the 1982 edition in Santa Clara, but that fell apart and it was transferred to Guayaquil, Ecuador. Anyone? Thank you in advance.

1
-1
Reply
tallswimmer
Reply to  He Said What?

When I left the board of USA Swimming nearly 8 years ago, the cost of the full World Championships was north of $100 million. I can imagine it’s only gone up from there. When you have sport funded by federal governments it’s much easier to put up a chunk of change that size. In the US sport is overseen by congress (Ted Stevens Amateur Sports Act), but relieves $0 from the federal government.

6
0
Reply
why not
Reply to  tallswimmer

But then again, the rumor mill seems to filled with the idea that Greensboro is looking to host

It is up for any US city to be the FIRST to host Worlds. We don’t really care where it is just do it.

0
0
Reply
He Said What?
Reply to  tallswimmer

I had no idea the cost was so high. Wow. Thank you, Tallswimmer.

You need a 50 meter competition pool, a warmup pool, a diving well, synchro pool and a water polo venue. It ain’t cheap!

Plus open water facilities and costs!

Aust & Spain 3 times each & soon to be joined by Japan. Kudos to Italy for 2. No US no France no GB no.Netherlands : time to heavily sanction them .1 entry per event ; no flag ; no anthem .