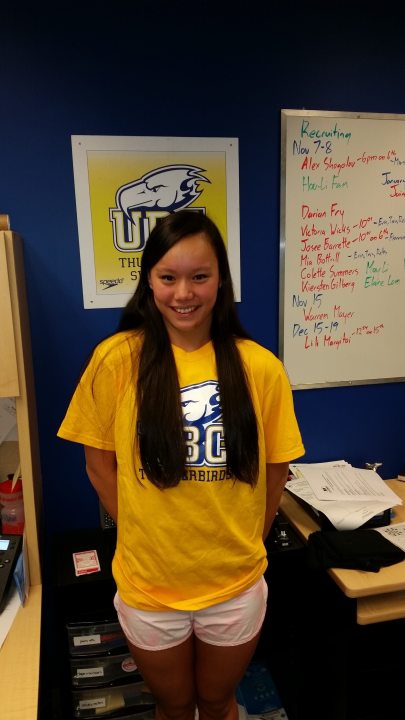 Canadian Jr national team member Heather Lam of the Vancouver Pacific Swim Club gave her commitment to swim for the University of British Columbia Thunderbirds next season, being the first swimmer to do so thus far.

Lam was a great pickup for the UBC powerhouse team as she’s already represented Canada internationally, competing at both the 2013 Jr FINA World Championships and the 2014 Jr Pan Pacific Championships this summer.

“As our first recruit to commit to UBC for next season, Heather is a local girl who worked her way up through the ranks of the Vancouver Pacific Swim Club; our sister team here at UBC…she is a sprint and middle distance specialist in freestyle and backstroke where she will have an immediate impact with four of our seniors graduating.  Heather will bring a great spirit and competitive drive to the women’s team.  For sure the girls are happy to have her as a Ladybird,” said UBC head coach Steve Price.

With the times she holds currently, Lam should be a threat right out of the gates in Canadian collegiate swimming as she’s got the speed to potentially make finals in multiple events already at the CIS Championships. Having international experience will also help her considering that the CIS Championships will be held in long course meters heading up to the 2016 Olympic Games.

“Swimming with VPSC has allowed me to become the swimmer I am today.  They have prepared me with the skills needed for me to move onto the next level of competitive swimming. I am confident that I am making the right choice in coming to UBC next year,” Lam said. “UBC is a place where I can grow as an individual knowing that I have incredible support from my coaches and teammates”

As one of the most competitive teams in the country, winning the last three CIS Championships and projected to win another this season, it seems as though Lam is a perfect fit for the Canadian powerhouse team.