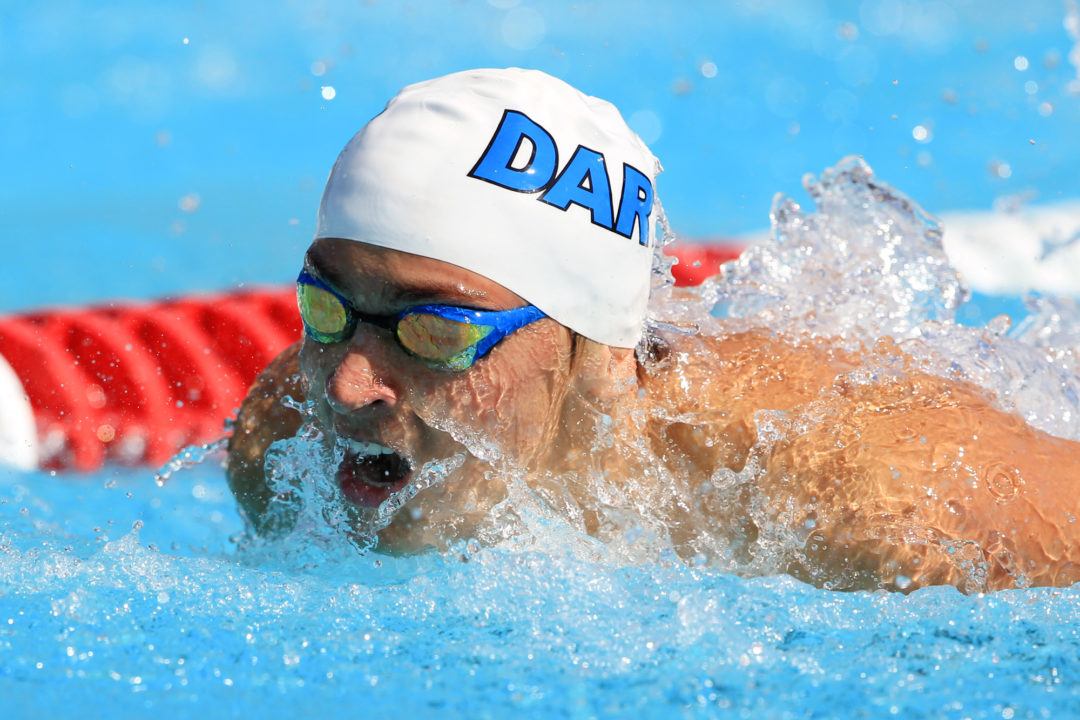 As it currently stands, Team USA has won 15 medals in 9 events - the max a team could have won by this point is 17 medals based on the two-per-country limit into the A final. Archive photo via Tim Binning/TheSwimPictures.com

Team USA’s juniors are dominating through one day of 2018 Junior Pan Pacs, winning more than half the total medals given out on Thursday.

Driving that number are wins in 7 of 9 day 1 events, plus 1-2 finishes in four of those. The Americans swept gold and silver in three straight events (boys 200 free, girls 100 back, boys 100 back) early in the meet, and the team won the meet’s first relay event by almost four seconds.

As it currently stands, Team USA has won 15 medals in 9 events – the max a team could have won by this point is 17 medals based on the two-per-country limit into the A final. Gianluca Urlando and Phoebe Bacon each won two golds on day 1, taking the 200 fly and 100 back (respectively) individually and teaming up on the mixed medley relay.

Both Australia and Canada have won gold medals, but it’s Japan showing up best in depth, with 7 total medals. No other nation besides Japan and the United States won more than two medals on Thursday.

TEAM USA travels almost 7,000 miles and is able to come up with these fantastic results – AMAZING!
If anyone can read the tea leaves of this meet (after only 1 day) for the future of USA SWIMMING, I
would have to say that things are, indeed, bright for the 2024 and 2028 Olympic cycles.

Remember that in most events it is easier to make the senior squad from any other country, so other countries lose a greater proportion of their top juniors to the senior competition.

Its also weird to see the Asian games conflicting with this meet. Its really just a 3 way meet with USA, Japan and Australia with a few Canadians and Chinese thrown in.

Yeah, throw names like Ikee, Wang, Li, McKeown, Milak, etc and the results look a lot different. Then again, you include Regan Smith and other American juniors and it’s hard to use these results as a great predictor of anything concrete at the senior level.

That Jr Team is stacked.

They are amazing to watch and are incredibly fast. They also have a larger team than most.
Shame they didn’t show a little respect to the lovely hosts and go to the opening ceremony like the other nations . (Also USA B team member from the mixed medley left the pool before the Fiji team had finished. Not a great look. )