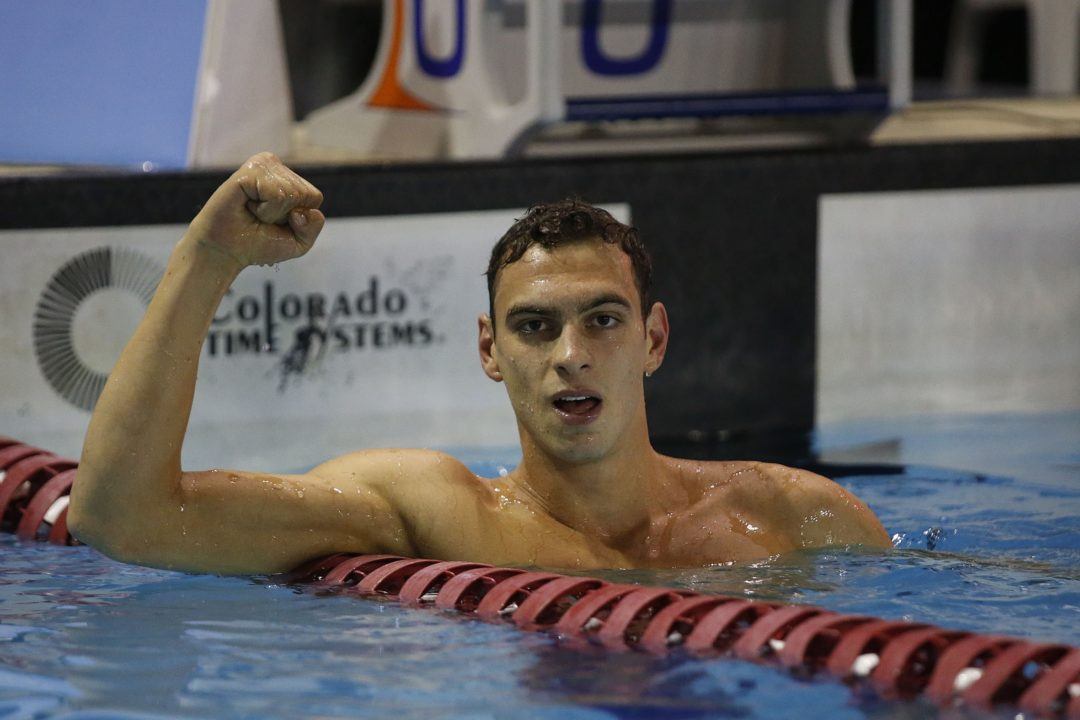 “I’m happy with the result I had here,” Scheffer said after his swim. It was very close to the (Short Course Worlds) qualifying time, which did not come, but the record shows that we are on the right track. It was a very complicated meet, I’ve raced in a series of competitions and it affects a little. Now it’s about focusing on the rest of the competition.”

Scheffer was joined under the South American and Brazilian Records by Breno Correia (the two are aged just 20 and 19, respectively), who finished 2nd in 3:41.65. Correia’s previous best was just 3:46.

Joining him in the South American Record books on Friday evening  was Jennifer Conceicao, who swam a 1:05.69 to win the women’s 100 breaststroke. She broke the old  National and Continental Records of 1:05.89 done by Carolyne Mazzo just a month ago at a regional meet in Sao Paulo. Mazzo finished 2nd in 1:05.89, just outside of her own record, while Argentina’s Julia Sebastian was 3rd in 1:06.29 – just missing her own National Record by .03 seconds.

Conceicao’s swim was all-the-more surprising given that she just flew into the country on Thursday: the day before racing began.

“I arrived yesterday (Friday) to Brazil,”she said after the swim. “Everyone knows that my short pool fundamentals are not the best and earning a record makes me even happier. It is very gratifying to swim here and see that our work is going well.”

Nobody hit a Short Course Worlds qualifying time on day 1 of the meet, but besides the above two, another pair were very close. In the men’s 100 breaststroke, Felipe Lima missed the standard by just a few hundredths, winning in 57.12.

“I ended up getting it a little wrong with the stroke count, I slipped a bit and I think that was decisive. I am happy to win, in scoring these points for the Minas Tênis Clube, and, now, I will focus on the 50m breaststroke.”

The other was American-trained Vini Lanza in the 100 fly, who swam a 50.17 – his new personal best in short course meters, and again just a few hundredths from qualifying for Worlds.

If fewer than 20 swimmers make the time standards, which is likely as the indexes are in many cases faster than the South American Records, then swimmers will instead be chosen by ranking to fill the roster.