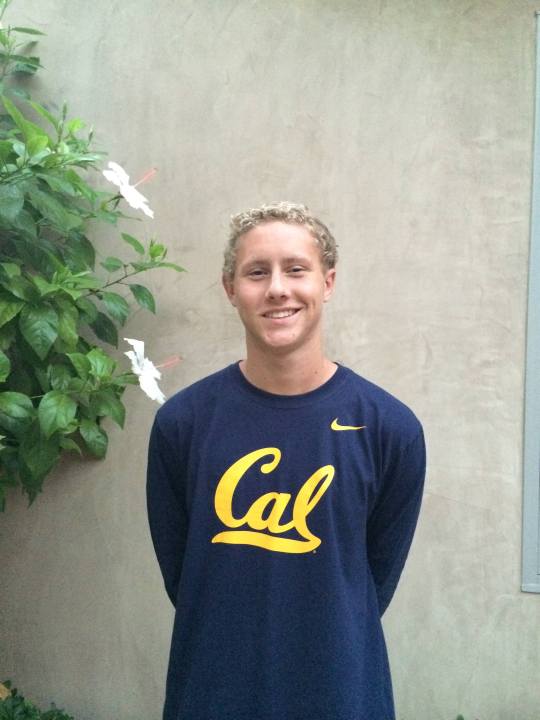 Capo Valley senior Nick Norman has made a verbal commitment to swim with Cal starting with the 2015-16 season. Current photo via Nick Norman

Cal’s men’s team is getting its momentum going, after watching the women’s team get a Big Name to commit early. Mission Viejo distance freestyler Nick Norman has now made a verbal commitment to the Golden Bears to kick off their recruiting season.

Norman is a true distance swimmer in the Mission Viejo vein: the longer he’s in the water the stronger he is. His top mile time is 14:58.76, which he achieved when he won the 1650 at the Oklahoma Elite Pro-Am meet last December. That was the second fastest time for 16-year-olds during the 2013-14 season, and the fifth-fastest for all 18-and-unders.

Norman, who trains with Coach Rose at Mission Viejo Nadadores, has improved his distance free enormously over the past several years.

“I chose Cal because I felt I connected with the team as well as the coaches. Dave and Yuri have an extremely organized program set up, and it’s no surprise that they’ve had so much success in the past years.”

Norman is capable of scoring at NCAAs his freshman year. His 14:58 is less than three seconds off the 16th place time this year, and he was only 16 last December when he swam it. Norman is about seven seconds off the 4:16-mid it took to make finals in the 500. Cal graduated their only finalist in the distance freestyle events (Jeremy Bagshaw, 9th in the 500 and 2nd in the 1650 at 2014 NCAAs) so they’ll be looking to Norman and current freshman Ryan Kao to step into the void.

Nice pick up for the Bears…certainly one of the best miler’s out there in the class. Will be interesting to see how well he can swim down to the 500. Cal can benefit from a strong miler…and perhaps channel a bit of Bagshaw in them!

Anne, thanks for the write up. One curiosity…the Cal W team…I see they’ve received a verbal from Katie M…who else? You mention “several big names to commit early…” I think I missed something!

haha my exact thoughts on the comment about the women’s team. does she know what we don’t know?!
Man, the Cal team is really going to miss Bagshaw. But I can see Yuri building a great distance program at Cal.

SWIMMINISGOOD: I believe Cal has picked up some excellent swimmers like Cierra Runge, Jasmine Mau, Maija Roses, and Noemi Thomas.

Thanks 🙂 Yes, those are freshman this year, so they are on board already (2014 recruits). Was curious if there were others who’d committed for this signing period…2015 recruits. Looks like Anne updated the story to reflect one 2015 recruit who’s given a verbal. More and more will start to verbal…exciting time 🙂