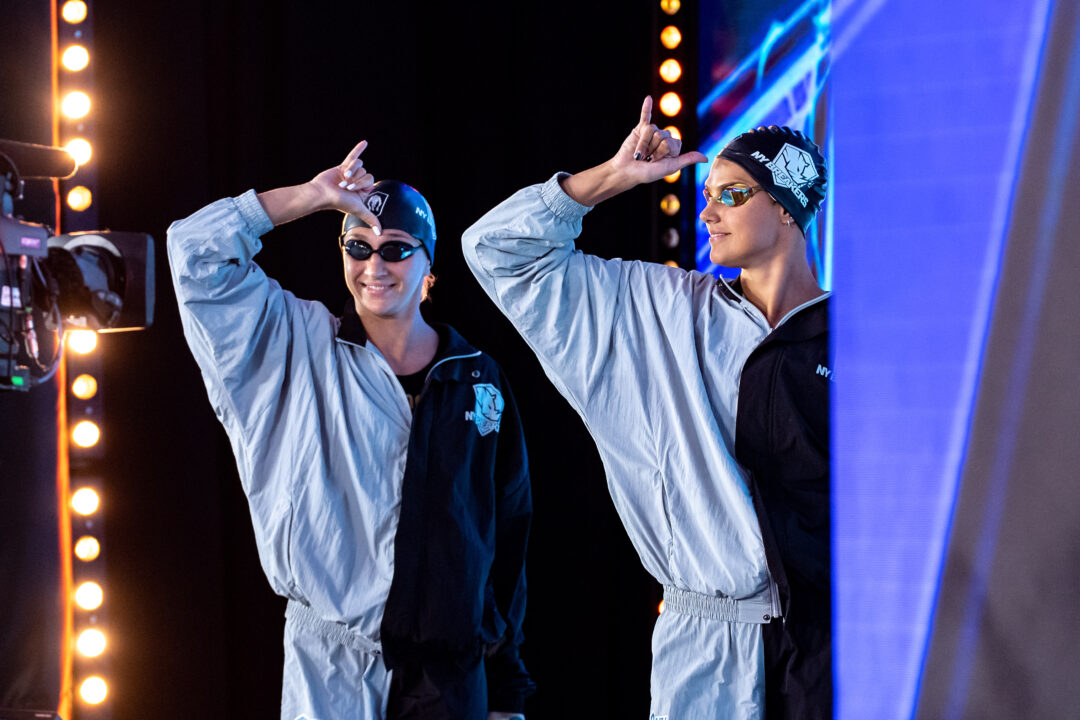 Teeter is the executive director of Set Swim Team in Southern California. Prior to that, he served as the head coach for the Ames Cyclone Aquatic Club in Iowa, and as an assistant coach at University of the Pacific, where the team earned 31 All-America awards.

Teeter experience and skills stretch beyond the pool deck too: he spent several years working in dryside jobs, including as the vice president/COO at EstateFinance Group, and as the President/COO at YourInheritanceNow.com. He is a graduate of the Creighton University School of Law, where he received his J.D.

In spite of his experience on deck as a coach, Teeter says he won’t be acting as head coach. He says that he thinks that his experience as a lawyer and in business will help ‘right the ship’ in New York.

Teeter’s club recently made headlines when they hired former US National Team Director Mark Schubert as the club’s head coach. That is significant because Schubert has launched an elite training group known as “The Swim Team” that so far has attracted Junior National Team swimmer Justina Kozan and Tokyo 2020 Olympian Michael Brinegar (though as a distance swimmer, he has limited value in the ISL format).

While the Energy Standard training group that was an early model for the league has more-or-less dissolved amid the COVID-19 pandemic, Teeter’s association with a pro training group makes him the second-such new endeavor by a key ISL contributor in the last few months: Cali Condors head coach Jeff Julian has also launched a pro group at Mission Viejo.

After a first season in the ISL where the Breakers finished in fourth place in all three of their matches, the team showed signs of improvement in 2020. With the addition of unheralded swimmers who wound up being valuable in the ISL format, like Abbie Wood, Arina Surkova, Kasia Wasick, and Joe Litchfield, alongside their team co-owner and highest scorer Michael Andrew.

That season saw the Breakers finish 8th among a newly-expanded field of 10 teams in the regular season and earn a spot in the league playoffs for the first time.

The team regressed in 2021, however, finishing 4th in each of their regular season matches and ending their season with a 3rd-place finish in the ‘play-in’ match among the league’s four bottom teams, placing 3 points ahead of the Tokyo Frog Kings.

Where the team excelled in Truijens’ one season as just head coach, he made a few key missteps when he added general manager duties. In addition to the unexplained inability to retain Wasick, one of the team’s top swimmers from 2020, the Breakers’ 2nd round draft pick David Popovici never competed for the team, their 4th round draft pick Maxime Grousset was not actually eligible to be drafted, and the team’s 10th round draft pick Mehdy Metella was also not registered with the league.

The breakers ended the season averaging the fewest points of any team in the league (310.5), and in spite of having the 3rd-best pick status, they also averaged the fewest points in the league from their draft picks. Compounded by Michael Andrew not competing partially in protest of the way the league treated his mom Tina, the former GM, the Breakers have a long climb ahead of them in the ISL.

After leaving her role as general manager, Tina Andrew began using the team’s official Twitter account to post charged political Tweets and COVID-19 misinformation. The league took several weeks to react, and while the account has not Tweeted since January 29, the existing Tweets have not been removed. The blue check mark indicating the account as a verified account has also been removed.

The International Swimming League has postponed its Season 4 from 2022 to 2023 amid challenges presented by the global swimming calendar and the ongoing war in Ukraine, which is where the league’s founder and primary financier Konstantin Grigorishin holds most of his wealth. Amid problems with confusion, mismanagement, and financial delays in the first three seasons, the league says that it will use the pause to reorganize and re-evaluate its operation with the hopes of emerging stronger next season.

Truijens is at least the third ISL general manager to leave their role since the end of the 2021 season. London Roar GM Rob Woodhouse and DC Trident GM Kaitlin Sandeno resigned their positions. Other general managers have been rumored to be considering their futures with the league as well, though at least one told SwimSwam that they are taking the postponement of Season 4 as an opportunity to weigh their decision as well.

I would like to learn what, exactly the role of ISL coaches, GMs and owners are (were?). I think we all have a pretty good idea what the responsibilities of an NCAA or Club coach are, but is an ISL GM only responsible for the roster? I’m guessing most of the athletes are still working with their “primary” coaches back home, perhaps even getting sets from them — do ISL coaches even write sets for their swimmers? Is the primary responsibility of an ISL coach just picking lineups? And the owner role seems the most opaque. Given the control of the league, what decisions can an ISL team owner make?

Congratulations Coach Double T!
Hope to see the ISL back in action / on track soon!

I don’t see anything in the linked article about M Andrews not swimming as a protest to the league’s treatment of his mom. Am I missing something?

I came here to ask the same thing, because it sounded like really interesting information.

I have met Tim, he is quite the character.
I hope ISL comes back and can be more accessible and understandable.

Any relation to Susan?

If the War in Ukraine is not resolved by 2023, then what?
Does ISL survive?

The league seems to be pushing harder than they have in prior years to bring in additional investors that could help diversify the funding sources outside of Ukraine, though nothing has been confirmed yet.

I think at this point, a full and complete answer to your question doesn’t exist. There are so many “what ifs” in play in that scenario.