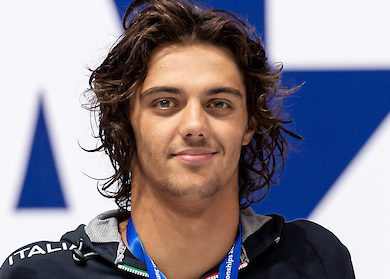 Day 1 of the 23rd International Swimmeeting Südtirol in Bolzano, Italy got underway tonight, with Madison Kennedy, Matthew Josa, Marco Orsi and Elena Di Liddo among the top competitors in the water.

Getting her campaign off to a quick start was American Kennedy, who fired off a winning time of 54.45 in the women’s 100 freestyle. But, she wasn’t alone, as the North Carolina native was joined by British swimmer Isabella Hindley, who also touched in a time of 54.45.

For Kennedy, the seemingly timeless 31-year-old owns a short course meters PB of 53.14 from 4 years ago. Her most recent top time came in the form of 53.89 clocked at the Indianapolis stop of the International Swimming League’s (ISL) inaugural season.

As for Hindley, the Briton’s previous PB in this event rested at the 55.55 notched way back in 2012. With her new career-quickest of 54.45 this evening, the Bromley swimmer now checks-in as the 35th fastest woman ever from her nation.

Hindley went on to win the women’s 100m backstroke as well this evening, topping the field by over 1 1/2 seconds in a victory of 59.96.

The men’s 100m back saw Brazilian Guilherme Guido fire off the winning time of 50.71 to get his hand on the wall first. He owns his nation’s standard in the 49.45 scorcher he put up at the 2018 Short Course World Championships.

Multi-medalist at the 2018 Youth Olympic Games, Thomas Ceccon of Italy, fired off 2 meet records to make his presence known here in Bolzano. The 18-year-old first knocked down the 50m fly record of 23.12 on the books since 2014 by Germany’s Steffen Diebler.

Tonight, Ceccon clocked 23.05 to shave .07 off of that time and enter his name in the meet records with a lifetime best.

His next victim was the 100m IM, where Ceccon logged the only sub-53 second time of the field in 52.79. With Ceccon’s previous career-fastest in this event resting at the 53.13 posted almost exactly a year ago, his 52.79 represents his 2nd lifetime best of the night.

Does he have any intentions to swim in the states for college?

I think it’s unlikely at the moment. For sure he would be a big player: what a versatility and easiness to swim great times in a wide range of events!