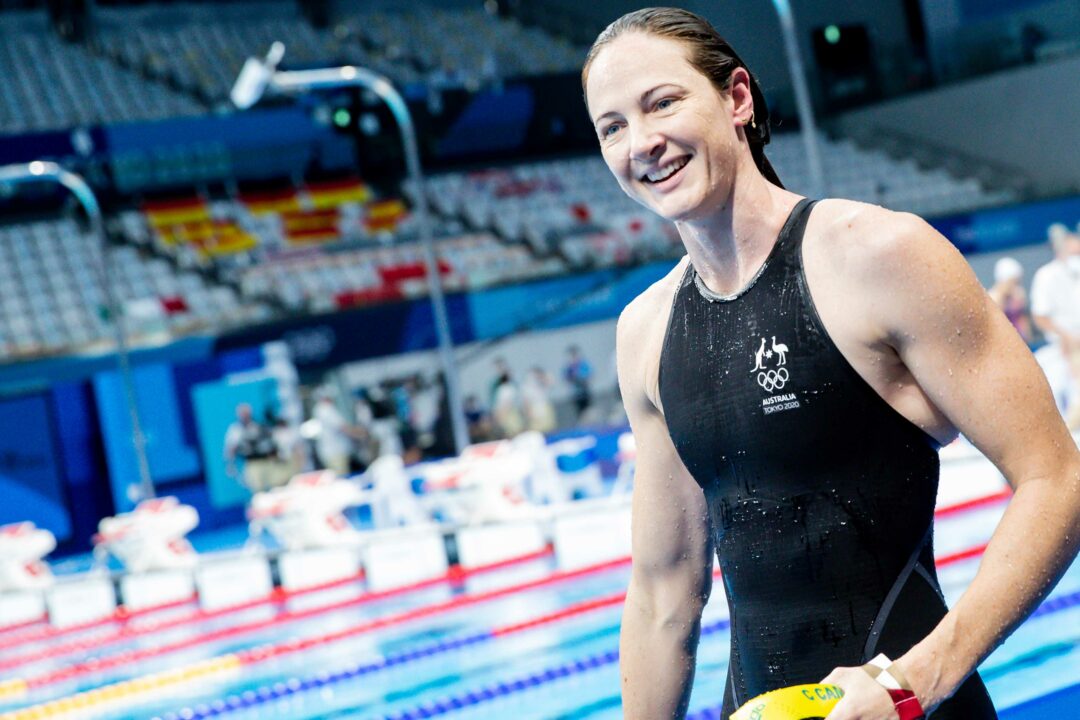 Take a look at the results of some swimming races of the last Olympic Games, and you probably will have little doubt that swimming is a sport for tall athletes.

According to the World Health Organization: “The expected average height of a healthy population should be 163 cm for women and 176.5 cm for men.” In fact, it would be very difficult to find an Olympic medalist below those figures in recent Olympics, which reinforces the motto: elite-level swimmers are above average in terms of height.

In fact, at the Tokyo Olympics, Japan’s Tomoru Honda, the bronze medalist in the men’s 200 fly, was the only male swimmer to win a medal in an individual event being under 1.80 m tall (he is 1.72 m – 5 ft 8 in). On the women’s side, there were only two swimmers who won medals in individual events being under 1.70 m tall: Canadian Maggie MacNeil and American Hali Flickinger.

It seems obvious. Height helps swimmers swim the fastest. Having a length advantage gives them more surface area to propel themselves forward with.

Interestingly, Costa Rican sisters Sylvia and Claudia Poll are the tallest swimmers to do so, being the only swimmers in Olympic history over 1.90 m tall (6 ft 3 in) to win medals in individual events.

They are the only Costa Rican Olympic medalists in history. Sylvia won the silver medal in the 200 freestyle in 1988. Eight years later, Claudia won the only gold medal for Costa Rica in the same event. She also won two bronze medals in 2000.

Claudia Poll was part of the tallest podium ever seen in Olympic swimming history on the women’s side. In the women’s 200 freestyle at the 1996 Olympics, the medalists were Poll (1.90 m), German Franziska van Almsick (1.81 m), and German Dagmar Hase (1.83 m). They combined for an average height of 1.85 m.

Note that on this list we have some sprinters (for example, Katrin Meissner, Cate Campbell), long distance swimmers (Astrid Strauss, Alessia Filippi), backstrokers (Missy Franklin, Jolanda de Rover) and flyers (Otylia Jedrzejczak, Dana Vollmer), but no breaststroke nor individual medley swimmers. Which makes sense, since breaststroke and individual medley events are more technique based. Breaststroke in particular places more emphasis through the middle of the hip, as opposed to the length of the body, more necessary in freestyle and backstroke.

At the Tokyo Olympics, Australian Cate Campbell was the tallest swimmer to win a medal. Being 1.86 m tall (6 ft 1 in), she won the bronze medal in the women’s 100 freestyle. Penny Oleksiak, bronze in the 200 free, was another tall simmer (1.85 m) who won a medal in Tokyo.

I thought Dara was well over 6′?

Where is Anna Hopkin?

She doesn’t have an individual Olympic medal.

Hopkin is very tiny in the swimming world.

What about in NCAA?

What about the new york breakers?

Yeah, I remember watching a programme about Anita Lonsbrough and she was taller than most of the men, and absolutely dwarfed all of the women, on the British team back in the 50s & 60s. At 5’10”, she’d be classed as pretty close to standard for a swimmer now.

And in the US the median weight is 160lbs. Women have to eat less & /or get their lower leg bones broken & ratcheted up another 3″ . They may not look much better but theiy will have longer legs.

I remember watching Natalie Coughlin swim in college. She was almost a head shorter than our top backstroker… still had a body length lead at 15m though!

Dutch Olympic champion from 1968, Ada Kok, was well over 6’1″ tall which was quite rare back then. Then again, the Dutch are one of the tallest nations in the world according to graphs and studies.