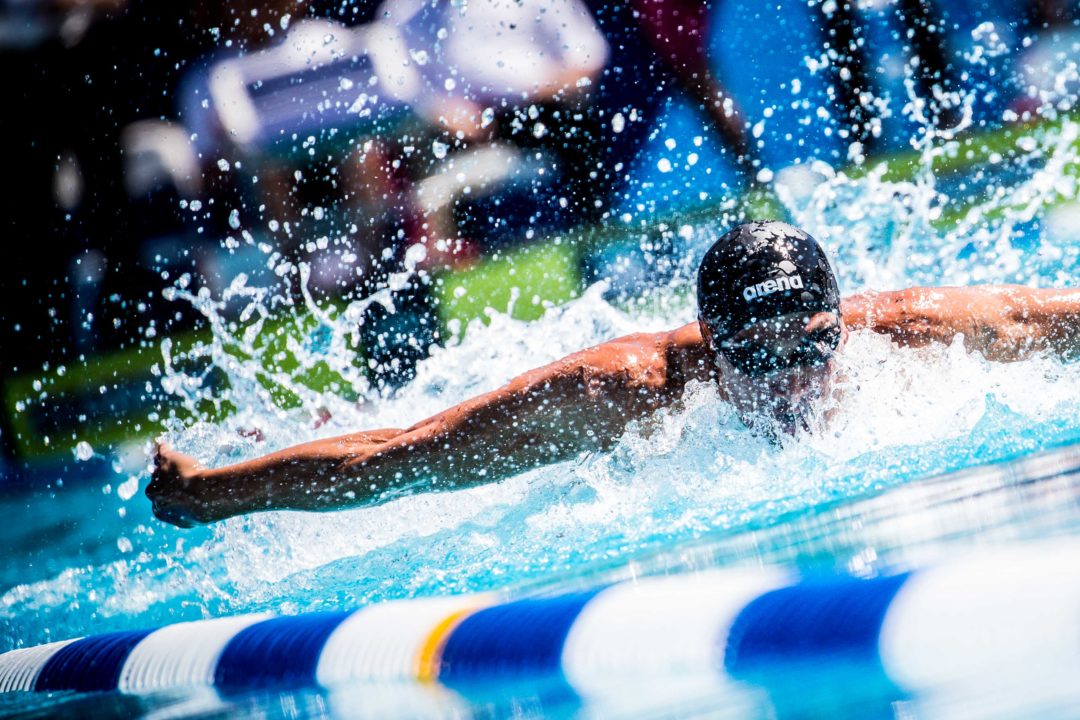 The Texas Longhorns have released their much-anticipated schedule, confirming that the annual Texas Invite will not feature swimming. Archive photo via Jack Spitser/Spitser Photography

Hannah Cech Transferring to West Virginia After 1 Year at Arkansas

The latest transfer out of the Arkansas women’s swimming and diving team is Hannah Cech who will swim for West Virginia next fall.

Longhorn Invite Day 2 Prelims: Isabelle Stadden Breaks 2:08 in the 200 Back

Isabelle Stadden hit a 2:07.93 PB to remain the 12th-fastest American in history in the 200 BK. Among active U.S. performers, Stadden also remains No. 6.

The Texas Longhorns have released their much-anticipated schedule for the 2019-2020 swimming & diving season, confirming that the annual Texas Invite will not feature swimming.

Both the Texas men’s and women’s programs were confirmed for entry at the Minnesota Invite in early December, suggesting that the Texas Hall of Fame Invite would not be taking place this season. The schedules confirm it, showing only a Texas Diving Invitational from November 21-23.

The Texas schedule is relatively light on dual meets. The highlight remains the Nov 8-9 triangular meet with Indiana and Louisville, this year hosted by Indiana in Bloomington. Last year, Texas hosted the tri meet, which featured Florida rather than Louisville.

Both programs will dual with Kentucky at home and Texas A&M on the road for their only fall dual meets. In the spring, both teams will make a jaunt through Arizona to face Arizona State and Arizona, followed by a meet at SMU, though that’s still listed as tentative on the men’s schedule.

The Longhorns have historically not pushed too hard for the Big 12 Championships, with the men especially blowing straight through, save a few swimmers looking for qualifications, to NCAAs. While that approach is unlikely to change at least until someone in the conference becomes more competitive with them, the change of venue may force a little more of an effort on the program for that meet.

Here are the full schedules:

There are a handful of really good showdowns for the Texas men (2nd at NCAAs last year) and women (5th). The triangular with Indiana and Louisville has three top-5 men’s programs and three top-10 women’s programs.

Maybe I’ve been sleeping, but have the men and women had the same schedules the last few years? Is this indications of a combined program once Eddie retires?

Must be doing work on TSC

Maybe I am reading this wrong, but they have Kentucky on Oct 25, and isn’t the American Short Course Championship at Texas?

You’re right. I was think renovations after kentucky but maybe not. They are still working on the outdoor pool. Odd

There were some issues with the ventilation system recently and I would assume that’s a lengthy renovation that they’re trying to do.

I still don’t understand why the secrecy/late schedule release for them each year?

Interesting if that’s true about renovations/ventilation. Almost no home meets this year, while last year it felt like they had almost all home meets and well…didn’t have a desirable end result for the men’s team. Was thinking perhaps Eddie thought the boys were getting too comfortable and so scheduled the opposite this year.