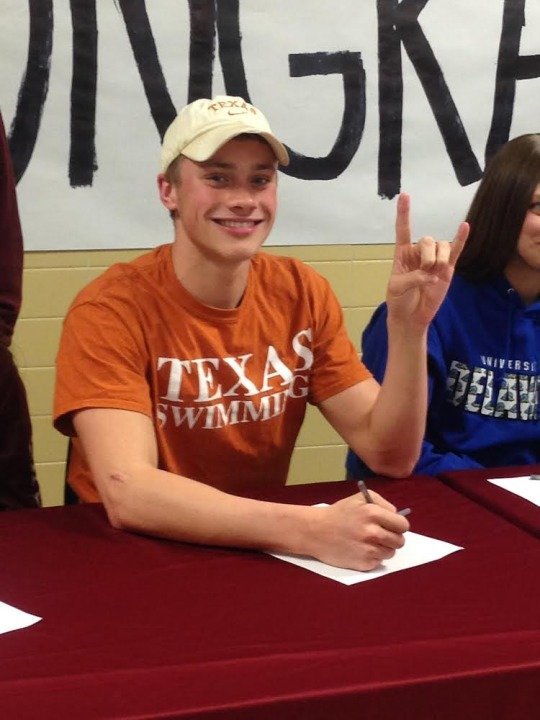 Nation's Capital senior John Shebat has signed on to join the Texas Longhorns for next season, giving a young team another fast-rising youngster to be excited about. Current photo via John Shebat

Nation’s Capital senior John Shebat has signed on to join the Texas Longhorns for next season, giving a fast-rising team another fast-rising youngster to be excited about.

Shebat has some impressive lifetime-bests, including Virginia state records in the 100 back and 200 IM. Even more impressive is that he only began swimming full-time after his sophomore year of high school, and before that was the quarterback of Oakton High’s football team.

He’ll bring a lot of versatility to a Texas lineup already built around several versatile young stars like Jack Conger and Joseph Schooling. Those backstroke times are probably most intriguing, though, and with the Longhorns graduating top backstroker Kip Darmody after this season, Shebat will be a welcome addition to the roster.

“I chose to go to Texas because I really felt a strong connection with the team and coaches,” Shebat said. “Not only is it a premier swim team but also one of the best schools academically in the nation. Hook’em Horns!”

The majority of UT’s graduate programs are ranked in the top 25 nationally, with many, particularly in engineering and sciences, are among the top 10 nationally

A great Collage, a top swim team a great fit to your talents and abilities, a great decision!!!

A fine choice, and I expect Shebat will do well at Texas and beyond. But “also one of the best schools academically in the nation”? Is there a certain program he’s planning on, or just being really generous?

you’re kidding me right?!!??!! “Generous” you obviously don’t know anything about the school! It is one of THE best there is

Guess it depends on how you want to define “one of the best.” US News has it ranked #52 out of national universities and #17 out of public schools, and it has an admissions rate of 40%. It’s not an Ivy League school, or a Cal, or UVA, but I don’t think it’s too big of a leap to say that out of roughly 2500 four-year colleges/universities in the US, it could be in the top 10-20% academically.

KABOOM went the dynamite! Eddie and the Longhorn Nation have a great new addition to their wonderful family. Congratulation John!