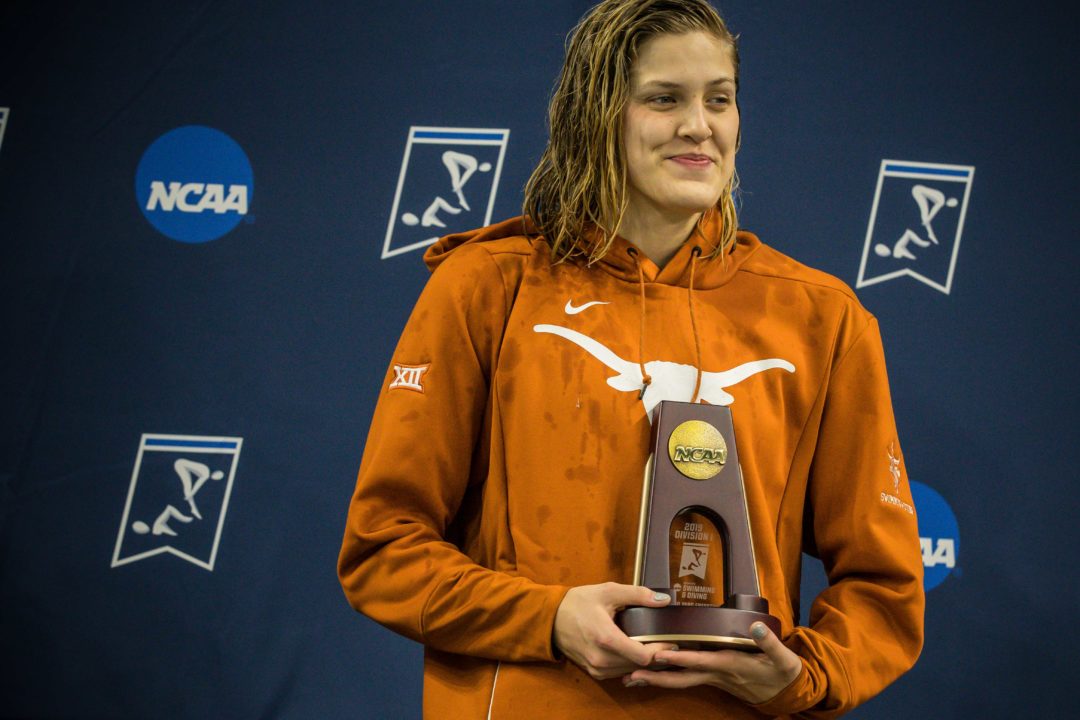 Evie Pfeifer is not done with college swimming.

Pfeifer, who recently wrapped up her senior season with the Texas Longhorns, will take advantage of the extra year of eligibility granted to student-athletes by the NCAA in light of the coronavirus pandemic, opting to compete with Texas for a fifth year next season.

Speaking on the SwimSwam Podcast with Coleman Hodges, Pfeifer laid out multiple reasons for the decision, led by her desire to race at four NCAA Championship meets and the fact she needs another semester to wrap up her schooling.

“Obviously, last year when NCs was cancelled everyone was devastated,” Pfeifer said. “But, I think as the summer went on and just the uncertainty of everything moving forward, I couldn’t really get over it. I was like, ‘I’m not ready to be done. I want four NCAAs.’

“And I had made that decision in the summer. I was like, ‘if there’s a way to make this happen I want this to be able to happen.’ Part of that was I wanted four NCAAs. But I also won’t be finishing school this year, I need a ninth semester to finish my engineering degree. So I’ll have a little bit of school carrying over into next year anyway.”

Once news broke in October that the NCAA would be granting an extra year of eligibility to winter student-athletes, Pfeifer knew she would get what she wanted, and is clearly very excited about it.

“I’ve wanted to come back since the start of all of this.”

Pfeifer is coming off a monstrous performance at the Women’s NCAA Championships in March, leading Texas with 48 individual points as the Longhorns placed third in the team race. The 22-year-old placed second in the 500 free, second in the 1650 free, and fifth in the 400 IM, while also contributing on Texas’ fourth place-finishing 800 free relay.

Pfeifer finished sixth and seventh in the 500 free in her freshman and sophomore seasons, respectively.

In terms of scholarships, Pfeifer says the timing worked out in order for Texas to continue honoring her scholarship while not impacting the team’s budget for incoming recruits. You can listen to Pfeifer explain the situation here.

In addition to her NCAA performances, Pfeifer is also a nine-time individual Big 12 champion, including sweeping her events (500/1650 free, 400 IM) at the 2021 Championships.

Listen to Pfeifer discuss her decision to swim an extra year of eligibility on the SwimSwam Podcast below:

Awesome! What a great leader for the women

Great training duo of her and Erica Sullivan next year at Texas !

I’m curious to see if we see more announcements like this over the next couple weeks (5th eligibility) . I see via Instagram, Della Torre and Fa’amausili are doing a 5th for Georgia.

I keep forgetting about Erica.

Stanford gets their stars back next year; more of a battle for 3rd. Hopefully Ariola gets back into the mix as well

How do you figure? Even without counting Pfeifer, Texas returns 2nd most points of any team, only behind UVA. Plus they add Erica Sullivan whose best 1650 time would have won every NCAA since Ledecky, and Hailey Hernandez, already one of the best divers in the country as a high schooler. Not saying they are a sure thing, they have relay woes, but I think they’ll at least contend for 3rd.

Because it’s Texas. They’re so hot or cold and mostly cold when it matters. Yes, they had a solid NCAAs this year & I hope they can keep it up.. but nothing is for certain with them. Hopefully they can stay humble from this year and use it as momentum.

They could use 21.+ Ariola back big time. Key cog on the short relays. Any word about her return?

They already have some sprint talent.. they just need to develop it. This year was a failure in that respect.

After the season she had, great idea! Hook ‘em, Evie!