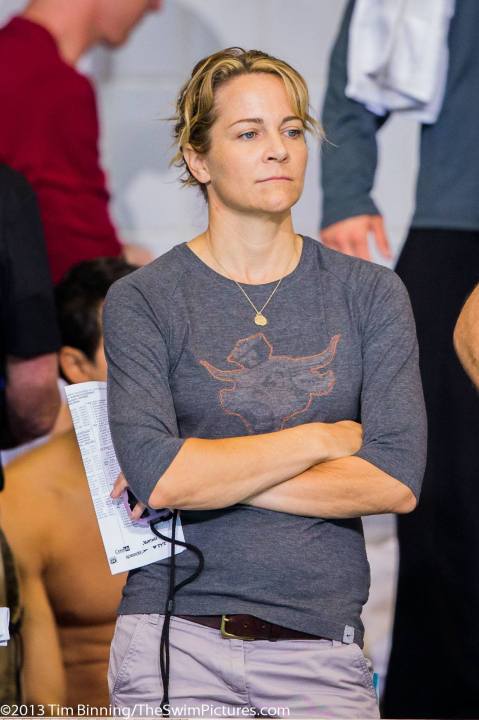 Head Coach Carol Capitani saw her Longhorns make a comeback against a Pac-12 power for the second-straight day. Archive photo via Tim Binning/TheSwimPictures.com

The Texas Longhorns have had a very good swing through California this weekend, posting back-to-back come-from-behind wins against two of the top 3 teams in the nation last year.

A night after overcoming a 24-point deficit to beat Stanford on the road, the women of Texas pulled off another comeback, beating the Cal Golden Bears after trailing by the same 24-point margin at one point.

This comeback saw the Longhorns win 5 of the last 6 events in a furious effort against the #3 team in the NCAA last season.

Cal started off well, taking three of the first four including a big-point medley relay win. In that 400 medley, Missy Franklin led off with a 54.70 to stake her team to an early lead, and Marina Garcia, Farida Osman and Elizabeth Pelton did the rest of the work in a 3:40.96 victory.

Texas went 3:41.87, getting a nice 53.84 fly split from Kelsey Leneave, who was a Cardinal-killer in Palo Alto one night earlier.

That relay win kicked off a great night for Pelton, who was the heavy lifter for Cal Friday.

Texas struck back on Kaitlin Pawlowicz‘s 1000 free win. Her 9:50.26 beat Golden Bear freshman Cierra Runge by about five seconds. Cal, though, went 2-3-4 to earn nine points to Texas’s ten and hang onto an 8-point lead.

Then Pelton nabbed her first of three individual wins on the night, going 53.79 to dominate the 100 back. The Golden Bears are frighteningly strong in the backstrokes, and so it was unsurprising that Olympian Rachel Bootsma made it a 1-2 finish for Cal, going 54.55.

That opened up a 24-point lead, the same margin Texas trailed Stanford by at the lowest point Thursday night.

The Longhorns got huge breaststroking points from Gretchen Jaques against Stanford, but mixed the lineup up a bit Friday. Freshman Bethany Leap took over the primary breaststroking duties and picked up exactly where Jaques left off, winning with a 1:02.73 over Cal sophomore Marina Garcia (1:03.80).

That run brought the score back to within 4, with Cal leading 77-73.

But then Texas had to contend with the Franklin-Pelton combo once again, and the balance tipped back in Cal’s favor. Franklin took the 100 free, cruising past Jaques 50.13 to 50.62 before Pelton destroyed the 200 back field. With no Franklin, perhaps the biggest challenger to the American record-holding Pelton in the event, Pelton went 1:54.33 to win by nearly four and a half seconds, and suddenly the Cal lead was back to 14.

But that was when the ferocious Texas comeback began. We jokingly called Texas the ‘Zombie Longhorns’ in last night’s recap, because of their ability to come back from the dead against Stanford, but those zombies were at their undead best on Halloween day. Madisyn Cox and Bethany Leap went 1-2 in the 200 breaststroke, going 2:14.32 and 2:15.50 over the top of Cal’s Garcia to instantly erase the lead Franklin and Pelton built up.

Then, a 4:50.98 Kelsey Leneave win in the 500 free put Texas on top for the first time all day. That event was another 1-2, with Kaitlin Pawlowicz taking second in 4:51.68, just two tenths up on Cal’s Catherine Breed. Swimming a tough double with the 100 free, Franklin struggled to 5th place, barely breaking five minutes and scoring just a single point.

Sophomore Brynne Wong got her second win for Texas in the night’s closest finish. Wong took the 100 fly by just a fingernail over Cal freshman Noemie Thomas, 54.08 to 54.09. That race alone was a 10-point swing at a crucial moment in the meet.

In 3-meter diving, Emma Ivory-Ganja completed her sweep of the boards, scoring 338.85, and Texas went 1-2 to rise to 141 points, just 10 shy of clinching the meet with two events to go.

Elizabeth Pelton wasn’t done fighting, though. The junior rolled to a 1:58.69 win in the 200 IM over Texas’s red-hot Madisyn Cox. Celina Li took third to keep Texas from clinching.

With just the final relay to go, Cal wasn’t officially beaten, but hung on by the narrowest of threads. The Golden Bears would have to go 1-2 in the relay to force a tie, but with Pelton and Franklin both out of event entries, that wasn’t meant to be. Texas took 1st and 3rd to wrap up the meet, beating Cal’s “A” relay by about nine tenths of a second.

Wong was a major force, splitting 22.9 on the second leg for Texas, and freshman Rebecca Millard came up with a meet-clinching anchor leg for the second-straight night. Her 22.8 split was enough to cap off a 1:32.29 win for Texas. Cal had the field’s best split with Farida Osman‘s 22.64, but it wasn’t enough to run down Millard for the win as Cal settled for a 1:33.15 second-place finish.

That last relay was a pretty good indicator of how the day went for Cal, depth-wise. Though Elizabeth Pelton and Missy Franklin combined for 5 individual wins, Texas managed to stymie the entire rest of the Cal roster, winning every race but those five. With neither of its two stars on the final relay, Cal simply couldn’t match a deeper and more well-rounded Longhorn roster.

Texas hopes that top-end depth will allow them to score points in a wide range of events at this year’s NCAA Championships, while Cal will look to its loaded freshman class to help build up depth as the post-season gets closer.

Two big wins on the West Coast keep Texas undefeated on the season. Coming off this 161-139 win, they’ll face in-state rivals Texas A&M at home next Friday. Cal, meanwhile, loses its first dual meet of the season. The Golden Bears will host Wisconsin next Friday.

Cals lack of depth is glaring, as you point out. But with the clue of Missy’s 500 time (she finished 5th in 4:59.08) you know they’re in very heavy training as well. That’s 26 seconds off her 2nd place time at NC2As last year. That said, hats off to the Texas zombies for slaying two dragons in one week. Glad to see they’re back in the mix.

Hats off to Texas on two great wins this week. Regardless of where they are all in training, kudos to the Longhorns for an impressive run. Texas is on the right track!!

It’s amazing what a change in coaching leadership can do to a team in just a few years in terms of morale and great performance amongst everyone on the team. No Texas was not off the map before. No the times were not bad at all. But now were seeing more than just a few swimmers step up to the plate, we’re seeing everyone contend for points during these big dual meets. Hats off to Capitani and Fink.