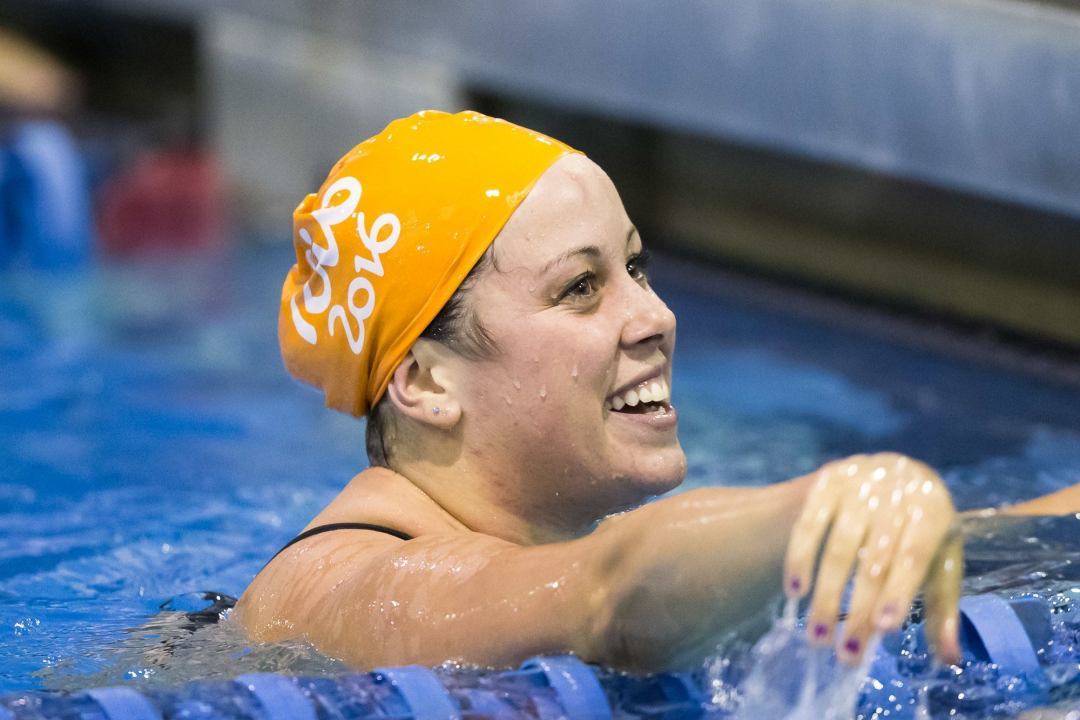 Molly Hannis and the Tennessee Volunteers host a big double on Friday against Auburn and Louisville. Archive photo via Tim Binning/TheSwimPictures.com

If you’re an SEC-watcher, don’t blink this weekend. Tennessee and Auburn step onto the blocks Friday afternoon, and LSU dives in late Saturday morning. That’s it.

The nine remaining conference squads are at home preparing for three-day invitationals at Georgia Tech, Virginia Tech, North Carolina, Texas A&M, Missouri and Georgia. All of which are set to go next week, except the Georgia Fall Invitational, which starts on Dec. 5.

Last week, Auburn and Tennessee probably had an extra bounce in their steps as they came off winning and honor-filled weeks to begin November. It is back to work Friday afternoon for the two SEC teams as they face each other and Louisville at 3 p.m. EST in Knoxville, Tenn. at the Allan Jones Intercollegiate Aquatic Center.

Going into the meet, the Volunteers last saw action on Oct. 31, when they swept SEC-rivals Kentucky but suffered losses to Indiana. On the next day, Auburn had their last meet, when they swept Alabama and LSU in Tuscaloosa with a strong team performance. Pair those sweeps with honors for both teams, as Auburn’s Joe Patching was SEC Male Swimmer of the Week for his contributions and Sam McHugh took home SEC Male Freshman of the Week for Tennessee.

Tennessee and Auburn men are undefeated against SEC competition. Based on the College Swimming Coaches Association of America’s rankings that came out this week, give 11th ranked Auburn the edge over 14th ranked Tennessee. Both will be in tough to top the 5th ranked Cardinals, though.

As for the women, Tennessee, who are also ranked 14th like their male counterparts, will be in a battle with 18th ranked Louisville and are probably “punching above their weight class” with 7th ranked Auburn, who are undefeated against SEC competition this season.

Who to Watch
Standing tall for Tennessee is McHugh, who has eight wins so far this season. He will be joined by breaststroker and fellow freshman Peter John Stevens, and middle distance freestylers David Heron and Evan Pinion. Mauricio Robles should lead the Volunteer divers. For the women, breaststroker and senior Molly Hannis, who won by big margins in her last outing, will be helped by freestyler Faith Johnson and backstroker Madison Hahn.

For Auburn, Patching, who is undefeated in individual races this season, will lead the men. Breaststroker Michael Duderstadt and diver Fraser McKean are threats to score big in multi-events. Middle distance freestyler and sophomore Ashley Neidigh and backstroker and junior Jillian Vitarius will lead the women.

The Cardinal men will be led by freestyle sprinter and junior Caryle Blondell, who is from Trinidad, and middle distance freestylers Trevor Carroll and Bryan Draganosk. Individual medley specialist Nolan Tesone, breaststrokers Carlos Claverie and Thomas Dahlia, and backstrokers Aaron Greene and Grigory Tarasevich will also compete for valuable points.

For the women, senior Tanja Kylliainen, who was last week’s ACC Swimmer of the Week for her multi-win performance against North Carolina, will be a threat to win several events for Louisville. Junior Kelsi Worrell and sophomore breaststroker Andrea Cottrell can also do the same.

Next Week: Vols Off to Chapel Hill and Auburn is in Atlanta

The Volunteers leave home next week for the first time since Oct. 10, when they fell to the University of North Carolina in Chapel Hill, N.C. They return to the “The Southern Part of Heaven” on Nov. 20 for the three-day, Nike Cup.

Auburn will  head to Atlanta for the Georgia Tech Invitational, which also runs Nov. 20-22. The three-day meet will see several SEC teams in competition.

LSU is set to host out-of-conference Incarnate Word on Saturday at 11 a.m. at the LSU Natatorium in Baton Rouge, LA., which gets the Fighting Tigers back to racing after taking one win out of a possible four in Tuscaloosa, Ala. on Nov. 1 against the Tide and Auburn.

Against Incarnate Word, LSU senior diver Alex Bettridge will be counted on to deliver points, as will senior Amber Carter and sophomore Kara Kopsco, who both earned wins in the SEC tri-meet against Alabama and Auburn.

The men should do much better against the Cardinals than they did against their SEC competitors on Nov. 1. Look to junior Alex Linge, senior Marco Gonzalez, freshman Joao Mescolote and senior Frank Greeff to lead the LSU men.

“[This meet] is an opportunity to see where we’re at speed wise,” said LSU head coach Dave Geyer to the school’s student newspaper, The Daily Reveille. “It’s good to get in a good training routine and vibe. The competition is important, but I like the consistency in trying to get a good two weeks of training in since our last meet.”

LSU freestyler and sophomore Devon Dabney told The Daily Reveille that many swimmers will be swimming events outside their primaries.

“It’s just going to be a fun meet because everyone’s doing different things,” Dabney said. “It just gives us a chance to not have to be stressed about always swimming our original events and not trying to go a time. You can just do the best you can.”

Stanfield makes News Out of the Pool
Junior Stacey Stanfield was recognized by the the Cox Communications Academic Center for Student-Athletes last week, as she was one of six LSU students honored for academic achievements and community service for November. Stanfield, who is a freestyler from St. Johns, Fla., has a wide range competing in the 50-yard and 500-yard. She earned her second varsity letter last year, when she swam career bests in the 50-yard free (24.61) and 200-yard free (1:49.61).

Fighting Tigers Take Their Fight To Texas Next Week
LSU returns to the pool next Thursday when they travel to College Station, Tx. for the three-day Art Adamson Invitational, which starts Nov. 20 at the Rec Center Natatorium.

The Rest of the SEC is Preparing for Invitationals

It is a welcomed break from competition for nine SEC teams who are home preparing for one of six, three-day invitationals hosted by Georgia Tech, Virginia Tech, North Carolina, Texas A&M, Missouri and Georgia.

With the exception of the Georgia Fall Invitational, which starts on Dec. 5 in Athens, all start on Thursday (Nov. 20).

This week, Arkansas prepares for their trip to Atlanta, where they will compete in the Georgia Tech Invitational, Nov. 20-22.

The University of Arkansas Natatorium will see non-collegiate action, as the Alumni Relays takes place Friday at 5 p.m.

Alabama Off to Virginia Tech & Servati Honored with Award of Valor
Alabama was off last week, after hosting an SEC tri-meet with Georgia and LSU the week before. They continue their break from competition this week and will travel to Blacksburg, VA. next week to compete in the Virginia Tech Invitational, which runs Nov. 20-22.

On Wednesday, the NCAA announced that John Servati, a senior swimmer on last season’s Alabama roster, will be recognized as the 2015 Award of Valor recipient at the NCAA Convention Honors celebration.

In April, Servati sacrificed his own life by shielding another student from a collapsing retaining wall during a tornado. The award is given to a coach or administrator associated with intercollegiate athletics, or to a current or former varsity letter-winner at an NCAA institution who, when confronted with a situation involving personal danger, averted or minimized potential disaster by courageous action or noteworthy bravery.

Gators have a Short Break after Splitting with Gophers
After splitting wins with the Minnesota Gophers, the Gators are out of competition until Nov. 20 (Thursday), when they are in Atlanta for the Georgia Tech Invitational. Read the full meet recap here.

The Gators defeated Minnesota, 167-125 on the men’s side, while the women suffered a loss to 117-183 to the Gophers. The Gators achieved 15 NCAA ‘B’ standard times at the dual meet.

This week the Mizzou are out of action, but they are back at it on Nov. 20-22, when they host the Mizzou Invitational.

Vanderbilt Off Until Georgia Tech Invitational
Vanderbilt defeated Tulane 178-109 last week but fell to 115-175 to Western Kentucky University 175-115 at the Centennial Sportsplex in Nashville, Tenn. The Commodores had top-three finishes in 13 of 14 events.

This week Vanderbilt is off until Nov. 20, when they head to Atlanta for the Georgia Tech Invitational.

Georgia Bulldogs Are off Until December
Last week was a big one for Georgia freshman Gunnar Bentz, as he was honored with SEC Male Freshman of the Week for his performance in Georgia’s sweep of Georgia Tech and Savannah College of Art and Design on Nov. 7. Read the full meet recap here.

The Bulldogs are out of competition until Dec. 5, when they host the three-day Georgia Fall Invitational in Athens, GA.

Kentucky Off to Ohio on Nov. 21
At last weekend’s quad, host Kentucky’s women claimed wins over Northwestern and Southern Illinois, and added one with the men’s victory over Southern Illinois. The team did lose both competitions to Missouri at the Lancaster Aquatics Center. Read the full meet recap here.

Next up for the Wildcats is a trip to Columbus, OH for the Ohio State Invitational, which runs Nov. 21-23.

Gamecock Divers Receive SEC Honors in Last Week’s Win
South Carolina defeated East Carolina and College of Charleston last Saturday afternoon at Carolina Natatorium. The Gamecocks are off until Nov. 21, when they compete at the Virginia Tech Invitational for three days of racing.

Texas A&M Rests After Defeating Longhorns
The Texas A&M women are perfect this season. After last Friday’s 169-131 win over the Texas Longhorns at the Lee and Joe Jamail Texas Swimming Center in Austin, Tx, the Aggies are 4-0. Read the full meet recap here.

The full Texas A&M squad has the week off, as they prepare to host the Art Adamson Invitational on November 20-22 at the Student Rec Center Natatorium in College Station, Tx.