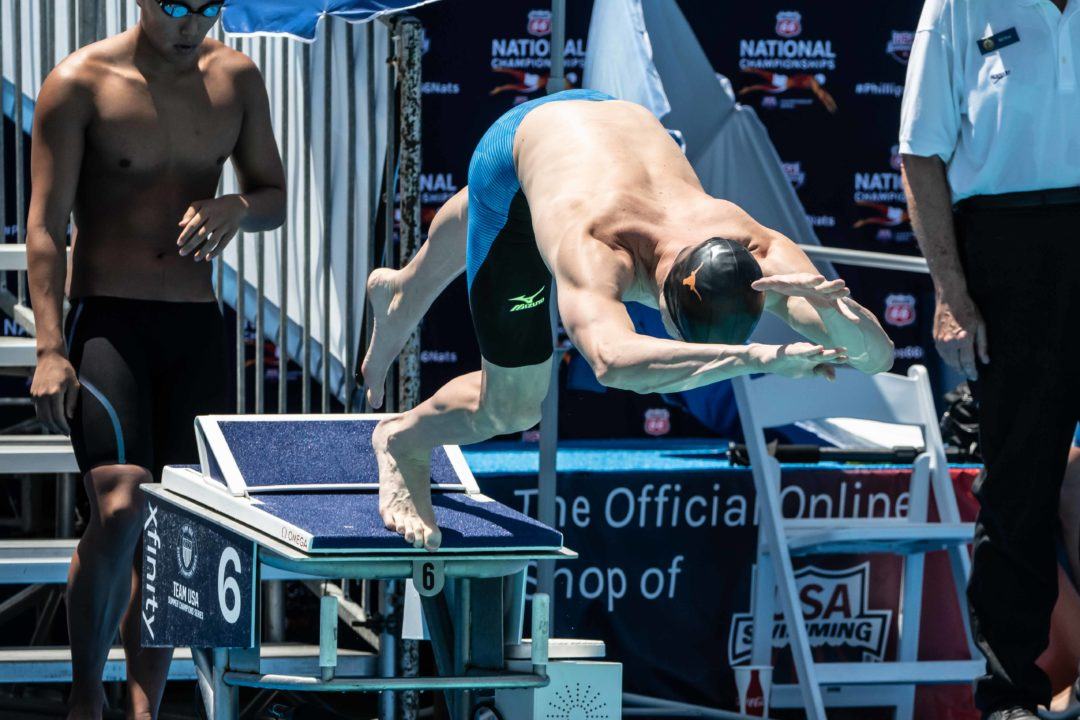 Tate Jackson's nation-leading 50 free was the brightest of quite a few highlights on the 2nd night of the 2018 Texas Hall of Fame Invite. Current photo via Mike Lewis/Ola Vista Photography

With in-season dual meets meaning not much when teams are in the middle of heavy training, fall invites give swim fans a sneak peak of what their favorite teams are truly capable of. The first full night of the 2018 Texas Hall of Fame Invite gave fans plenty to chew on, and here’s a rundown of just a few of the big things we noticed.

Given the nature of their events, it can be tough for sprinters to be consistent, and in some ways, Texas senior Tate Jackson is typical in that respect. He’s steadily progressed throughout his time at Texas, going from no points as a freshman to one point as a sophomore, then breaking out with some big times at last year’s Big 12 Championships. He’s struggled to match his Big 12 times at NCAAs, but still managed to make the A-final in the 100 free last season.

He had a break out meet at this past summer’s USA Swimming Nationals, dropping almost eight-tenths of a second in the 100 free, all the way down to a 48.2. Unfortunately for Jackson, he had finished 9th in prelims, so that 48.2 that won the B-final didn’t qualify him for World Championships, but it showed what the Texas native was capable of.

Tonight, Jackson dropped another big swim, leading off Texas’s 200 free relay in 18.79, a time that gives him the fastest 50 free in the nation by a sizable margin. He couldn’t match that time in his individual 50 free, and he didn’t swim on Texas’s 400 medley relay, but if we see more of the same from Jackson throughout the meet, and if he can repeat these sorts of time at NCAAs, that’ll go a long way toward Texas winning its 5th-straight NCAA title.

Arizona sophomore Brooks Fail was one of the feel-good stories of last season, as he got his NCAA cut at a time trial at the Pac-12 meet despite not making Arizona’s scoring squad. Last night, he split 1:33.69 on Arizona’s 800 free relay, a sizable improvement over his best flat start time of 1:37.06. Today, he improved on his 500 free time in both prelims and finals, dropping from a 4:16.21 to a 4:13.54 in prelims, and then improving almost another two seconds this evening to win in 4:11.84. He won’t need a time trial to punch his NCAA ticket, as that’s an ‘A’ time and makes him the 3rd-best performer in school history, with only Jean Basson and Chad Carvin ahead of him.

The Wildcats as a whole seem to be having a great second year under head coach Augie Busch. Kirsten Jacobsen and Hannah Cox both seem to be on track to scoring in the 500 again, going 4:36.81 and 4:38.18 tonight. The women earned a B cut in the 800 free relay and an A in the 200 free relay, while the men have earned B cuts in the 800 and 200 free relays, and an A cut in the 400 medley relay. Not all of those would have necessarily scored at NCAAs, but early returns on the season indicated that Arizona is back on the way up after a rocky few years.

Strange Happenings in the Men’s 500 Free

The 500 was quite the mixed bag today. While guys like Fail, Jack LeVant, and Alexander Zettle had some strong showings with big drops, other swimmers probably had fans scratching their heads.

Townley Haas, the defending NCAA champion and one of the fastest men ever in this event, swam 4:20.57, quite slow even for someone who doesn’t typically show a lot in-season. He then scratched finals, instead swimming on Texas’s 200 free relay. Now, Haas has some insane range, and is capable of breaking 19 on a relay start (19.01 tonight on a .29s reaction time), but you have to wonder if this was the plan all along, why he didn’t either scratch the 500 this morning, or try to throw down a stronger time early on.

Similarly, two of Haas’s teammates, Sam Pomajevich and Parker Neri, both swam well off their best times this morning before dropping six seconds from prelims and finals. Sophomore class weight lifting session before prelims?  Didn’t shave until after prelims? Just took it easy during prelims to save for finals? We’re not really sure, but Texas had a pretty good history of success in the 500, so we’ll assume they know what they’re doing.

Texas Women Lighting Up the Relays

The Longhorn ladies have been looking strong all fall, and appear to have carried that momentum into the first taper meet of the season. They won both relays tonight, earning NCAA ‘A’ cuts in both, with some exciting times. All four members of their 200 free relay split 21s, and their 1:26.84 would’ve finished 3rd at NCAAs last season. Those sprint times, plus the fact that both Grace Ariola and Brooke Hansen split under 48 anchoring two of Texas’s 400 medley relays, means that the Longhorns appear primed for a strong 400 free relay, too.

However, over the past few years, we’ve seen Texas throw down some speedy times early on in the season, only not to be able to back up those times comes NCAAs. If the Longhorns are actually able to nail their taper, they could make things very interesting come March.

Didn’t want to make this so Texas-centric, but we’ve got to mention the 50.73 breaststroke split by Texas freshman Charlie Scheinfeld. Assuming it’s legit (and it appears to be), that’s a huge boost for the Longhorns. Heck, even if there was a timing malfunction, or a bad touch by Austin Katz, it’s hard to imagine it being more than a second off, and even a 51.73 would be a marked improvement on the 52.64/52.98 Texas got on the breaststroke leg at NCAAs last season. (Update: race video appears to confirm that the splits in the live results are accurate). Texas hasn’t had anyone other than Will Licon score in either breaststroke event since 2015, but if Scheinfeld puts up an individual time commesurate with the apparent split tonight, he should be well on the way of picking up some crucial individual points for Texas this year.

Scheinfeld also led off the free relay in a solid 20.2. He’s for real and not one dimensional.