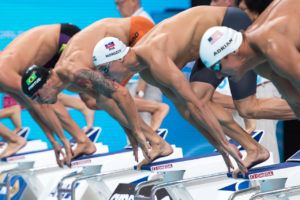 After missing Florida’s mid-season invite in the fall, Vanessa Pearl was back in-form on Friday, swimming season-bests in the 100 breast and 200 IM.

Erika Brown and Ryan Held won the 50 free titles tonight and now rank #3 among Americans in the event. This was Brown’s first ever national title.