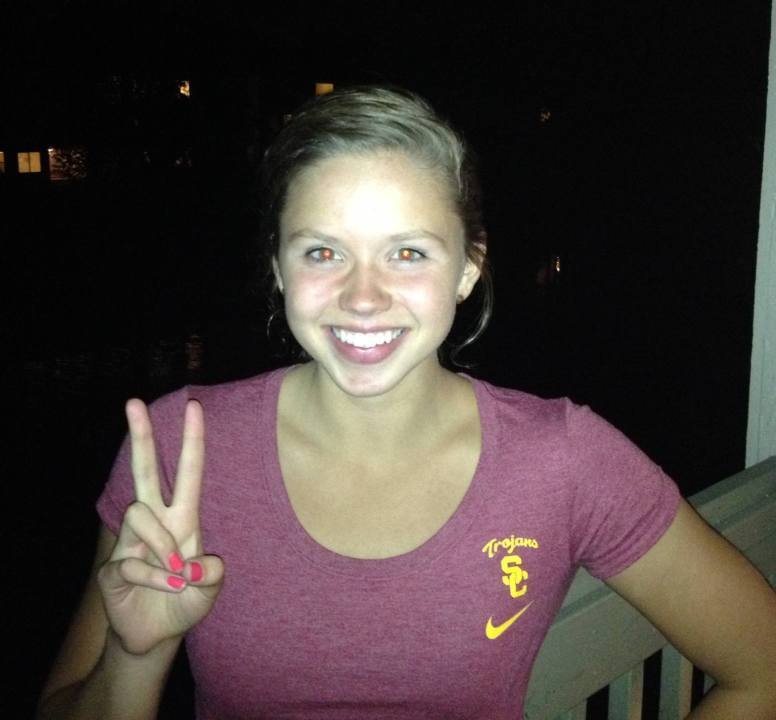 Sydney Lofquist of the Mason Manta Rays near Cincinnati, Ohio has verbally committed to the USC Trojans. Lofquist excels in... Current photo via Sydney Lofquist

Sydney Lofquist of the Mason Manta Rays near Cincinnati, Ohio has verbally committed to the USC Trojans.

Lofquist excels in many different events, but generally speaking is a classic “tough event” swimmer. The events in which she was at least Winter Nationals cuts are:

USC has had a few All-American type swimmers in the last decade who have fit in that same mold, including current junior Jasmine Tosky. The one that completes this triangle, however, is former USC team captain Amanda Smith. Before leaving at the end of this summer to become the assistant coach at Florida Gulf Coast, Smith coached Lofquist in Mason.

Lofquist should be, at the very least, a three-event conference scorer for USC as a freshman, and could snag a spot at the NCAA Championships in the 500 free where she dropped over a second last season.

In total, during her junior year of high school, she was best times in yards in the 500 free, the 200 fly, and both IM’s. Her summer in long course wasn’t quite as good, but she did manage to improve her 400 meter IM lifetime best to 4:50.54.

Lofquist is the defending Ohio Division 1 High School State Champion in the 500 free and 200 IM for Usruline High. As a sophomore, while swimming for Dayton Oakwood, she won the Division 2 state title in the 200 IM as well.

Welcome to the Trojan Family! USC is a great place to be and you will flourish there! Looking forward to watching you swim there repping the Cardinal & Gold. Fight on!