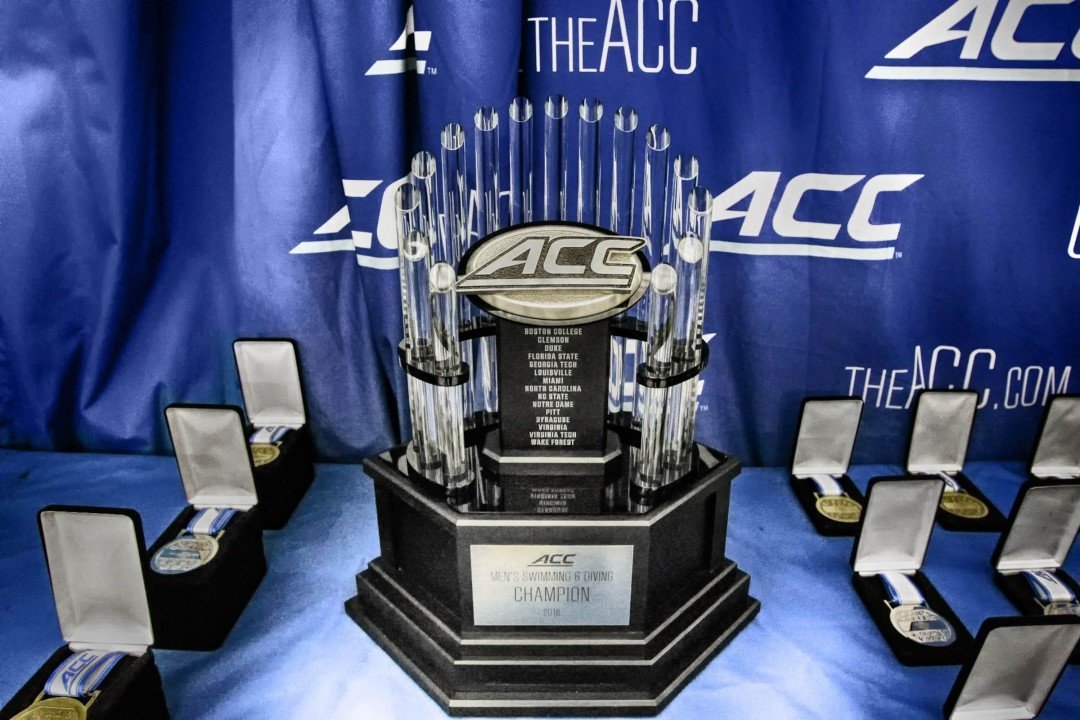 With more than half the season and all the mid season rest meets complete, it’s time to start looking ahead... Current photo via Tim Binning/TheSwimPictures.com

With more than half the season and all the mid season rest meets complete, it’s time to start looking ahead to conference meets. First up, the ACC.

To project the meets, I’ve used SwimSwam’s Swimulator (available on the front page). This tool creates scores out a meet using top times so far this season (it can also do average times), while respecting plausible event combinations and trying to maximize each team’s points. It does not include diving. To get an idea of how we can expect these projected scores to change at the real meet, I compared last year’s projection as of today’s date to the real conference score at last year’s championship meet.

Defending champions NC State lead the men with 1294  projected points. Last year they gained 110.5 points vs their projected points as of January 10th. Their closest rivals all dropped points at conference last year. The closest to NC State, Louisville 287 points back, dropped 24 points vs their mid season projection last year. Last year’s 3rd place team, Notre Dame ranked 5th, was also 5th at this point last year. They jumped by gaining 189.5 points vs projection while Virgnia and Florida St each dropped over 250. Notre Dame sits closer to both those teams this year than they did last year at this point.

The top projected men’s individual scorers mostly belong to NC State. Andreas Vazaios and Anton Ipsen lead with perfect 96s. Next is Ryan Held with 92 and Justin Ress with 91. The top non NC State swimmer is Carlos Caverie of Louisville with 91.

Louisville leads the women’s rankings with 1284 points. Their closest rival, Virginia with 1034, scored 145.5 fewer swimming points than their projection at this time last year at the 2017 conference meet. Louisville scored nearly exactly their projected score as of 1/10/17 dropping only 3 points at 2017 ACC’s. Last year’s champ, NC State beat their January projection by 141.5 points to win; however, their projected score was 177 points higher at this point last year. A much larger swing will be required to win this year as Louisville is sitting on an over 450 point edge over NC State right now, and last year at this time Louisville trailed NC State by 30. The margin is a bit wider between NC State and Virginia this year. Virginia is currently 217 points clear of NC State. Last year at this point they were 141 points ahead.

The top projected women’s individual scorers are more evenly distributed than the men. Mallory Comerford of Louisville leads the way with perfect 96 followed by Jen Marrkand of Virginia with 92, Caroline Baldwin of UNC with 88, Hannah Moore of NC State with 84, Mariia Astashkina of Louisville with 84, and  Lina Rathsack of Pitt with 83.

Are there going to be AAC projections or did I miss them?

UNC Men 10th in the conference again?!!! Such a waste.

NC State should not taper at all for this meet. March is where the focus should be.

They may have to, many of their swimmers didn’t swim fast enough at Invite to garauntee a spot at NCAAs

Still having a hard time believing that the Marshall coach didn’t grant Rowe a release for NC state women. I won’t be pointing my swimmers in that direction anytime soon. No reason to not grant a release.