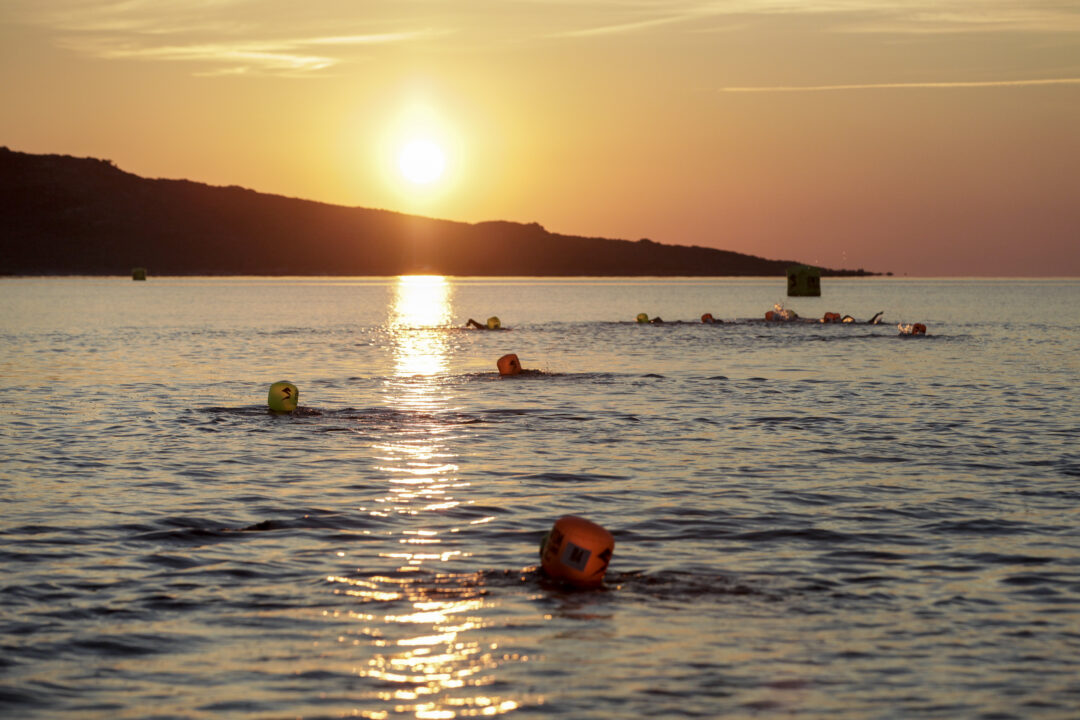 At the first light of dawn a relaxing swim towards the Puntaldìa promontory greeting to the sun opened the second day of SWIMTHEISLAND Sardinia – San Teodoro, a swimming event in open waters organized by TriO Events with the collaboration of the Autonomous Region of Sardinia, the Municipality of San Teodoro and the Marine Protected Area of Tavolara – Punta Coda Cavallo.

After the Sunrise Swim (1100mt), which ended with a tasty breakfast, the weekend supported by Jaked continued with the competitive athletes races in the magnificent Gallura scenery of Lu Impostu beach, with 9 foreign countries represented (France, Hungary, Poland, Belgium, Argentina, Israel, Finland, Switzerland and Iran).

Among the international participants also the Polish water marathoner and ice swimmer Krzysztof Gajewski, holder of the European record in the category “The Longest Lake Swim” (77.5km). In 2020 he completed the 48h Swim (125km) and is now preparing the 170km in the Masurian Lake District.

THE PODIUMS ON SUNDAY 13TH OF JUNE

On the top step of the Short Swim (1.800m) podium there were the Florentine Gianluca Caldani (Firenze Nuota Master ASD) in 24’51” and the 16-year-old Isabella Nieddu from Cagliari in 24’55”. The Hungarian Bence Farkas (Torokbalint Senior Swimming Club) and Virna Marongiu gained the second place, while Carlo Alberto Negri and the Hungarian Csilla Csikany (Torokbalint Senior Swimming Club) achieved the third place.

Triplet of the Piedmontese Daniele Savia (Swim for Passion) who also conquered the Classic Swim (3.500m) in 50’20” after having won the Sprint Challenge and MWM Relay with his team. He beat Fabrizio Baralla (TRI Team Sassari) and Giuseppe Giovanni Scanu (TRI Team Sassari). Among women, Giulia Gigli from Milan snatched the victory in 56’43’’ from Carlotta Maffezzoli (Swim for Passion) and Claudia Pastorino, after the great performance on Saturday.

The Long Swim (5.700m) winners, who circumnavigated the Ruja island along the route, were Mattia Magarotto in 1h26’54”, against Carlo Alberto Fossati and the Finnish Samu Hanhela, and Michela Losa in 1h46’24”, against Eleonora Panini (Pentathlon Modena ASD) and Anna Ismail Mueser (Sea Sub Modena).

The DDS-7MP Triathlon Team athletes triumphed in the Combined Swim (Short 1800m + Long 5700m): the Swiss Jeff Cook (22’19” – 1h39’06”), fifth at the World Age Group Triathlon Championships 2019, and Israeli Hagar Cohen Kalif (24’20” – 1h47’21”), already involved in the World Triathlon, World Cup and European Triathlon Cup circuits. At the second and third places in the men ranking there were Alberto Padoan (Swim Sassari) and Luigi Pintus (Rari Nantes Cagliari), while in the women one the Argentine Daira Marin and Jessica Foroni. The 26-year-old from General Roca won in 2019 the fourth place in the FINA Ultra Marathon Swim Series and last April she was the first woman to swim the 70 kilometers of the Itatí-Corrientes traverse. This challenge created to increase awareness about water and environment protection supporting the “Más aguas menos botellas” initiative.

“A beautiful event – told Rita Deretta, Mayor of the Municipality of San Teodoro – which we hope will leave its mark on all participants. As a municipal administration we are focused on sport and will continue to do it. If it weren’t for the use of the mask, we experienced a day of newfound normality. Let it be a new beginning! This is the greatest wish I extend to everyone, citizens, businesses, tour operators in the area, not only in Sardinia but throughout Italy“.

“Tackling the difficulties of the period – told Andrea Rosa of TriO Events – would not have been possible without the synergy that TriO Events have started with local authorities. Our goal is to encourage sportsmen to discover the Italian wonders such as San Teodoro and also through their passion to actively support them in this restart”.

THE NEXT DATES OF THE CIRCUIT

On the 26th and 27th of June the Swimtheisland circuit will take place at the Garda Lake for the historic SWIMTHEISLAND Sirmione, while on the 4th and 5th of September there will be the new appointment with SWIMTHEISLAND Portoferraio – Elba Island. Grand finale with the main event SWIMTHEISLAND Golfo dell’Isola on the 2nd and 3th of October in Ligurian Spotorno. For information about the competitions and to register www.swimtheisland.com