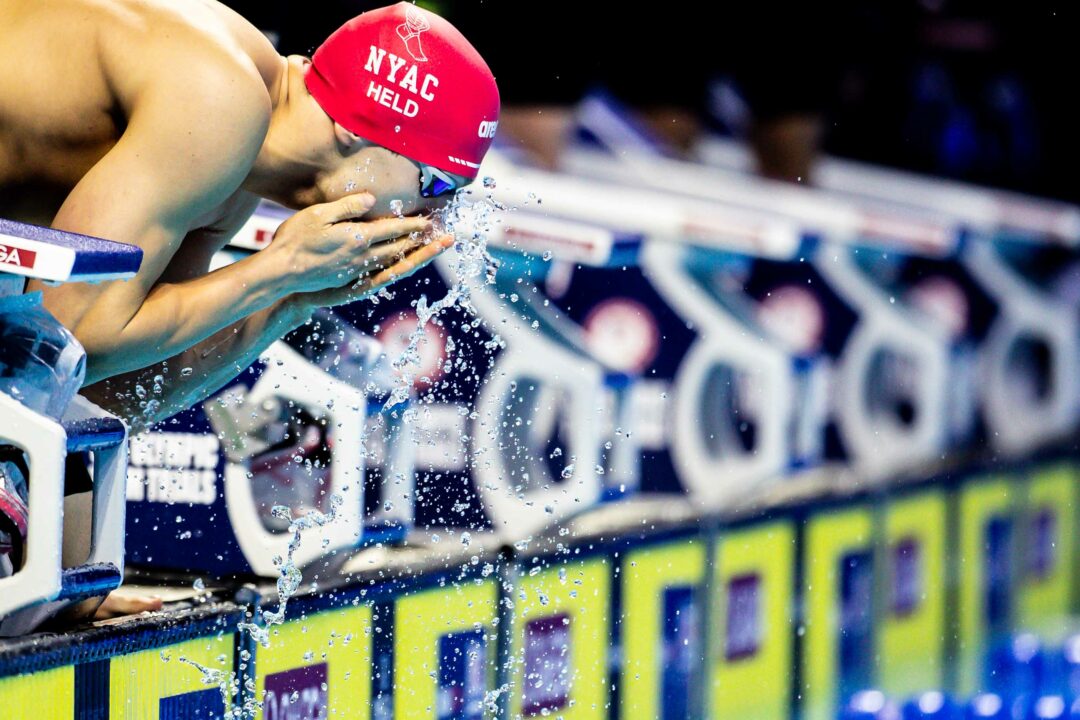 Held picked up six medals at the Short Course World Championships in Abu Dhabi, including two relay golds and a pair of individual silvers. Archive photo via Jack Spitser/Spitser Photography

Annie Lazor has evolved into one of the best 200 breaststrokers on the planet in recent years, winning bronze in the event at the Tokyo Olympics.

Our most recent poll asked SwimSwam readers which 2016 U.S. Olympian had the best chance of rebounding and making 2022 Worlds after missing the 2021 Olympic team:

Question: Which 2016 US Olympian that missed the team in Tokyo do you think has the best chance of qualifying for the 2022 World Championships?

The poll was a follow-up to one we ran in December that asked the same question on the women’s side, where Kelsi Dahlia emerged as the leading vote-getter at 48 percent.

That came as no surprise, as Dahlia was coming off of breaking the world record in the SCM 100 butterfly, and the same goes for the result here.

Ryan Held, who initially appeared to be in a position to be named to the 2021 Olympic team but ended up losing his spot in the 400 free relay due to roster numbers, picked up a ton of momentum in December and lands at the top of the poll with over 86 percent of votes.

Held picked up six medals at the Short Course World Championships last month in Abu Dhabi, including two relay golds and a pair of individual silvers in the 50 and 100 freestyle.

The 26-year-old then had a video posted online of him clocking 29.6 in a push 75 free (SCY, without fins), further showing he’s on incredible form.

Though perhaps the poll might’ve been a bit closer had we distinguished it to be only for qualifying in an individual event, with Held the benefactor of having more spots available to qualify for Worlds in due to the 400 free relay, he’s got a great chance to make the team individually.

The other options in the poll all picked up a small portion of votes, led by breaststroker Cody Miller, who won bronze in the 100 breast back at the 2016 Games in Rio.

Two 2016 Olympians that weren’t included in the poll were Nathan Adrian and Josh Prenot, who haven’t announced retirement, but also haven’t shown any indication they’re training for the 2022 World Trials, which are only a few months away.

Below, vote in our new A3 Performance Poll, which asks: Will having the 2023 World Championships in November diminish the quality of swimming?

Guess your soul isnt staying with you for too long..

Nor for off events. He did swim the 200 free in college on NCSU 800 free relays and was always solid.

Held is the obvious choice, considering his main event will usually take 6-deep, and he’s definitely in contention to get an individual spot in the 100 FR.

Cody Miller is cooked, and I’d be extremely surprised if he ever makes another major international team (WCs or OGs)–he looked bad at trials and even worse in the ISL, getting jackpotted in your main event should tell you that you’re over the hill. Cordes showed a surprising amount of life last year but I don’t think it’s enough to overcome MA and Fink.