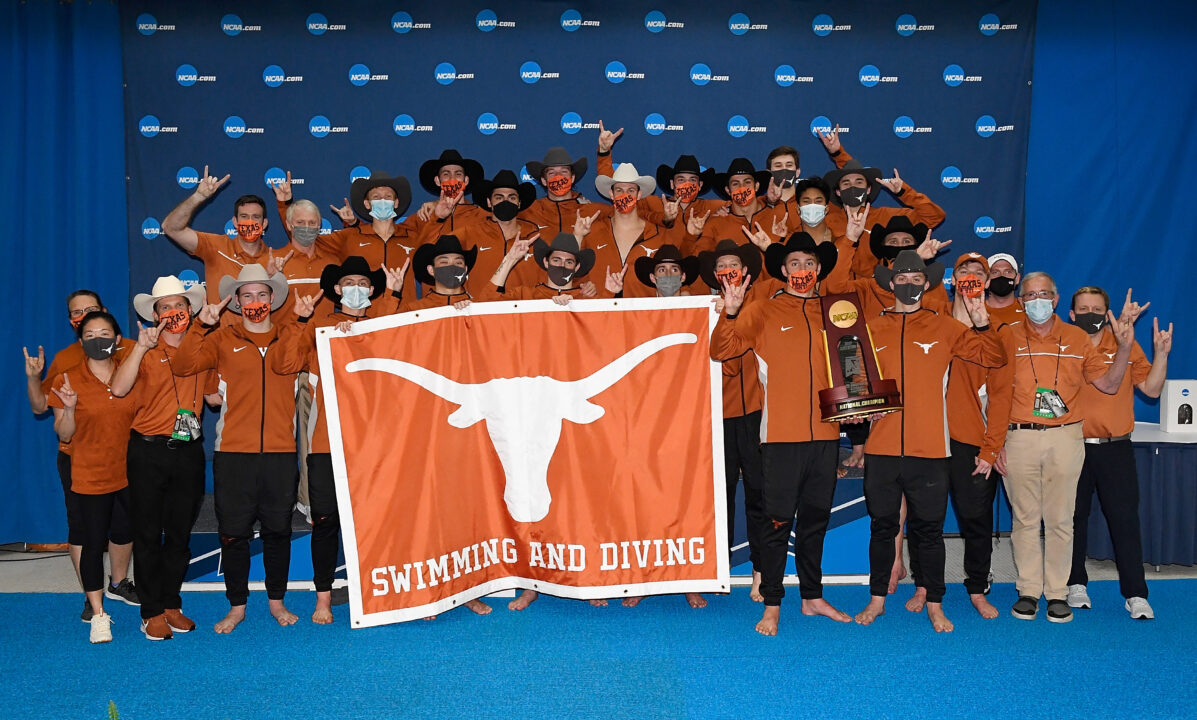 Nearly 60% of voters believe the Texas Longhorns can repeat as men's NCAA swimming & diving champions, even with a coaching change. Archive photo via Mike Comer/NCAA Photos via Getty Images

The documentary “The Weight of Gold” shows there is a pressing need for mental health resources to be implemented in pursuit of optimal performance.

Our most recent poll asked SwimSwam readers if the Texas Longhorns can repeat as NCAA champs next year even with head coach Eddie Reese retiring:

Question: Will Texas repeat as NCAA Champions with a new coach next season?

Eddie Reese announced his retirement the week after winning his 15th career NCAA team title. Reese is the most-decorated swimming coach in men’s Division I and had been coaching Texas for 43 years.

Reese will remain in touch with the program, though, suggesting he’d still be coaching practices for both the Texas men and women. He’ll remain in his head coaching role through this summer’s Tokyo Olympics, then transition into a “coach emeritus” role that keeps him coaching the Longhorn athletes, though not serving as the head coach of the team.

Texas won the meet by 27 points over California. The Longhorns only graduate 149 points from their senior class and lead all teams with 282 “returning” points from underclassmen. Further tweaking those numbers is senior diver Jordan Windle, who suggested on social media that he will return to take advantage of a fifth year of eligibility. Windle was the team’s top scorer, putting up 52 individual points.

Below, vote in our new A3 Performance Poll, which asks voters to pick how far the best-performing wild card qualifier from the Wave I Olympic Trials meet will advance in Wave II:

Hard to really make a good call without knowing how many Cal seniors will come back. Some good up and coming eams too. I agree that with what we know, Texas should be the favorites.

The question should be if they will win in 5 or 10 years IMO.

I think the recruiting might start to slow down. Texas has a few advantages for recruiting. They’re attractive to in state kids because of in state tuition and there is a large talent pool in texas. They’re really good, who doesn’t want to be part of national championship team. And kids will take the chance to swim under Eddie. Eddie will still be around however. I see them being good, but qualifying 26 swimmers for nationals will probably go away over the next few years.

Fun fact, only 5 of the kids on the NCAA roster are from Texas. Texas gets a large number of its studs from OOS

Since Texas no longer helps cover summer training costs, including classes, the OOS recruits will dry up fast. The cost of a summer class for an in stater is $500. The cost of the same summer class for OOS $2,000. Insane. More insane when you factor in the cost of living in Austin these days… easily $3,000 for the summer for housing alone. All others costs on the rise too what with half of CA tech moving in with their fat wallets. UT may not make financial sense for OOS.

Will be interesting to watch.

Since it’s been repeatedly said that Eddie will continue coaching, but in a non paid capacity, I think that means that Wyatt will be the new coach and that the transition will be unusually smooth. Eddie has said he will be “coach emeritus”, which means he still retains involvement in the program. It’s carefully chosen designation. Eddie will coach, which he loves the most, and Wyatt will coach and handle all the administrative duties including recruiting. If Eddie continues to have an important coaching role, it may not hurt Wyatt’s recruiting very much because now Eddie can focus on what he loves most, coaching. This may be a win-win for Eddie, Wyatt and Texas.

Texas recruits love Wyatt and support Wyatt. Nobody can just replace Eddie, but I believe Wyatt will be very successful in selling Longhorn swimming magic.