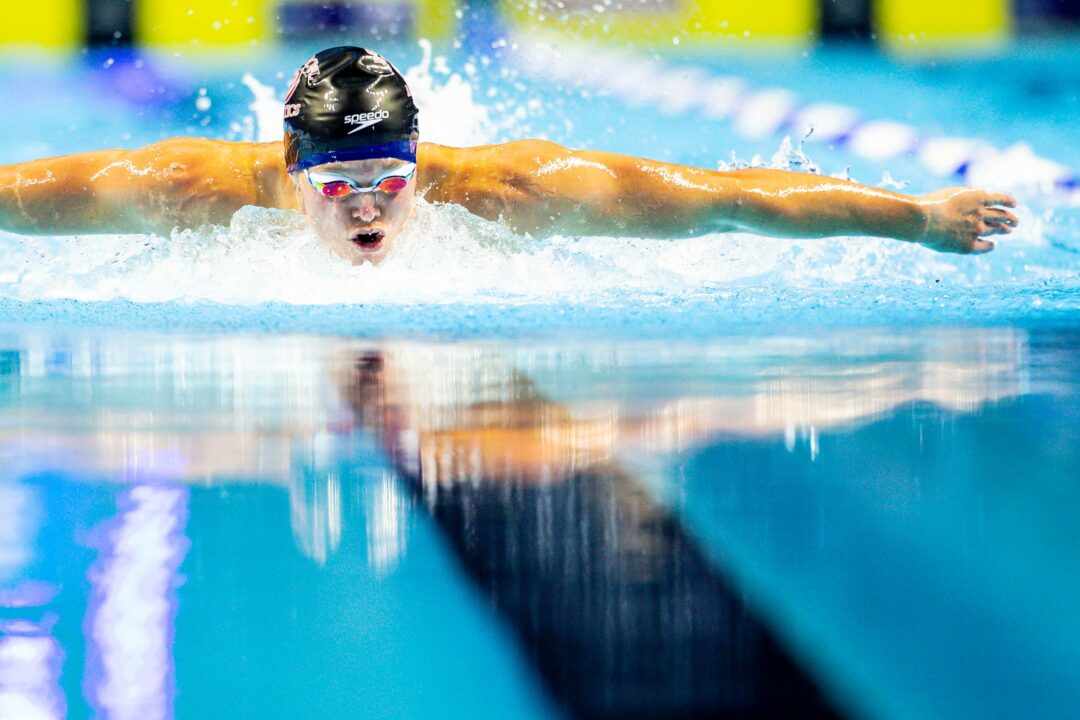 The Virginia Cavaliers made the cross country trip to take on the Cal Bears in Berkeley for some October dual meet competition. Cal, who finished #2 at last season’s NCAA championships and may even be deeper this year, easily defeated Virginia (#9 at 2021s NCAA), 168-94, but the Cavaliers managed to bookend the meet with a pair of relay victories. Despite the swift times, we were told that no tech suits were involved. Social media does show that the Cal band made an appearance, though.

That relay win would prove to be Virginia’s only victory for a while, and one of only three for the evening.

Stars Trenton Julian and and Destin Lasco led Cal with a pair of victories each. Julian, one of several fifth years whose return is a big boon for the Bears, took the 200 free in 1:35.54 and the 100 fly in 46.96. Julian finished 3rd in the 200 free at the 2021 NCAA Championships, and he’s a strong 400 IMer, but he may opt for the 100 fly on Day 3 this year, especially after a strong summer in long course in that event.

A few notable Cal newcomer also earned wins. Will Roberts, who transferred to Cal as a grad student for his 5th year after wrapping up four years at Michigan, won the 1000 free tonight in 9:13.71. Liam Bell, who transferred from Alabama, won the 100 breast in 52.49. Bell should provide some much-needed depth for the Bears, who didn’t have anyone other than Reece Whitley swim the 100 breast at NCAAs. Freshman Gabriel Jett won the 500 free in 4:28.20.

Last season we saw some freshman sprinters light up pools all season with historically fast 50 and 100 free times, and several of those men squared off tonight, as Cal’s Bjorn Seeliger battled UVA’s Matt King and Matt Brownstead in both of those races. Seeliger got the better of King in the 50, winning 19.70 to 19.79.

It’s worth noting that neither of Cal’s other other confirmed big fifth year swimmers — Daniel Carr and Sean Grieshop– swam tonight. Also, US Olympian Bryce Mefford appeared in the Meet Mobile list of swimmers, like Carr and Grieshop, but did not swim either, and does not currently appear on Cal’s roster. The two teams will also compete tomorrow, with the format apparently changing to off-distance events.

The last paragraph is really just the dagger in the heart of any team not named Texas. Yeah, look at our stars and our depth in crushing UVA, and by the way, three huge fifth-year studs didn’t even swim. Jordan Windle excepted as the solo force he is, the ‘COVID senior’ class at Cal is just incomparable.

You’re right. SwimSwam Magazines really are big, coming in at nearly a pound per issue😔

The women’s meet looked to be a lot more interesting

For UVA men to win both sprint relays vs Cal is pretty impressive!

Looking at UVA women times, I had to ask myself, we’re they or were they not wearing tech suits?

All results should indicate swimmers in tech suits with an asterisk!

If you would read the women’s article: “Neither team wore technical racing suits for the meet.”

I did read it but after I looked at results. And not all articles inform us who is in a suit or not!

I was at the meet. No tech suits from either team.

Is Mefford confirmed to be coming back for a fifth year?

For some reason I had it in my head that he had confirmed, but as I now note above, he did show up in Meet Mobile, but he does not currently appear to be on Cal’s roster.

My main takeaways from this meet are that Hugo Gonzalez can excel at anything he swims, and Gretchen Walsh is a destroyer of worlds.

I’m sure Hugo enjoys being able to race backstroke some with Mefford1 done with college and Carr not racing. European champ would probably compete for a title.