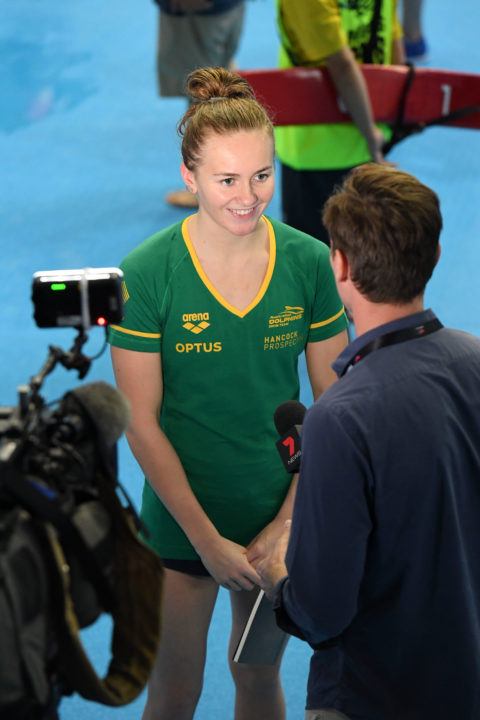 A deal between FINA and Australian broadcasters concerning the presenting of the FINA World Championships has still yet to be struck. Archive photo via Swimming Australia, Ltd.

We reported back in June how a deal between FINA and Australian broadcasters concerning the presenting of the FINA World Championships had yet to be struck and that appears to still be the case.

Aside from 2013, if negotiations fail to move further, this would mark the first time since 1986 that the world’s biggest aquatic competition outside the Olympics has not been broadcast in Australia.

Per Phil Lutton at The Sydney Morning Herald, ‘neither [Australian station] Seven nor Swimming Australia can reveal details of any commercial arrangements, but the sum is understood to be around $400,00, which would entail broadcasting the 8-day swimming program from July 21.’

The SMH continues, ‘With travel and commentary and broadcasting coasts included, the final figure could be as much as $800,000, pitting it out of reach of any of the Australian networks.’

If this situation holds, the only opportunity for Australians to view the championships would be via FINA’s own online streaming service, which is a paid service.

Swimming Australia CEO Leigh Russell told The SMH, ‘We are currently in discussions with FINA regarding alternative options for viewing the broadcast in Australia and hope to be in a position to provide an update soon.’

This isn’t something entirely new, as the Aussie World Swimming Trials itself was without a television broadcast. Prelims and finals were only available via live streaming.

Just for perspective from another area of the world, it appears that the World Championships coverage in Great Britain is also shallow on being live. Per BBC.com’s schedule, swim fans can watch highlights of the diving and swimming competitions on BBC Two and listen to coverage of swimming on BBC Radio 5 Live Sports Extra.

FINA: We are committed to growing the sport!
Also FINA:

Amazing yeah, one of the biggest swimming nations in Australia & no coverage, FINA, you are amazing, not.

but the Australian commentators are the best.

You mustn’t have had to listen to Basil on Channel 7.

Yeah, that guy was the absolute worst. Messed up names, people in relays, etc.

They know the soldiers are rebelling and theyre lining their pockets one last time. Hike up the cost of rights; Countries either pay or don’t. For those who don’t, oh look your citizens can watch on FINATV… A bargain at $25 for the week, knowing families, friends and some fans will need to pay up.

Disgraceful behaviour from FINA once again.