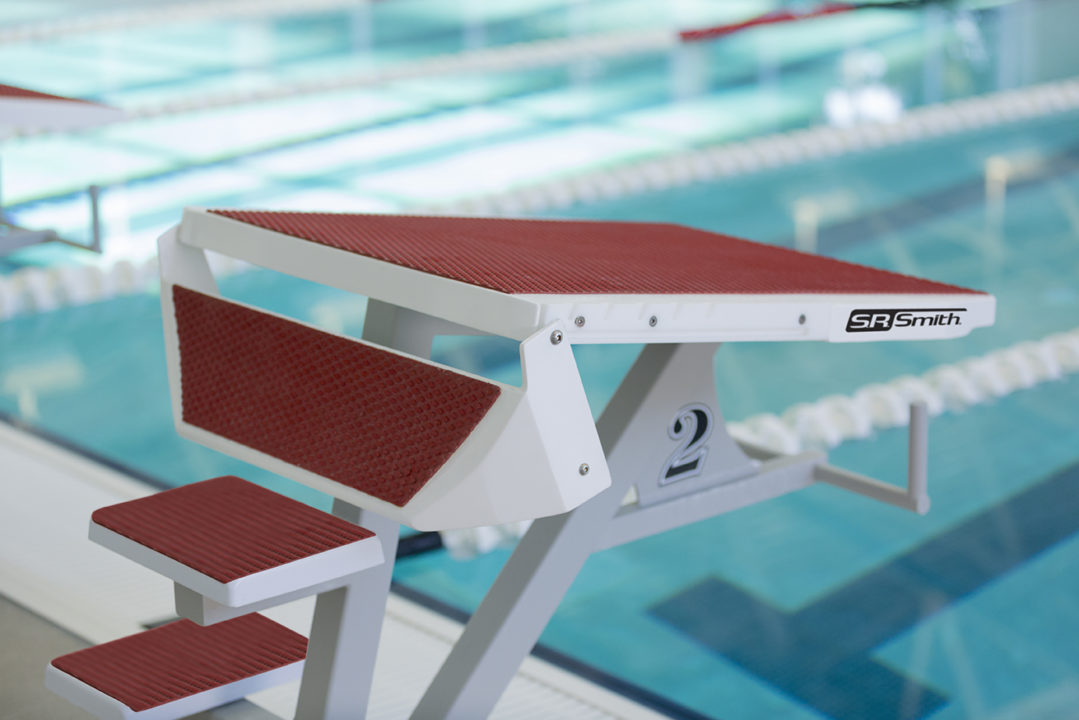 A major change in starting platform design took place in 2008 when FINA approved the inclusion of an angled wedge at the rear of blocks. Current photo via SR Smith

A message from S.R. Smith

Competitive swimming equipment has evolved significantly over the years – the addition of goggles for visual clarity, compression swimsuits for reduced drag and lane lines with specialized disks that quell waves are a few examples. With the goal of providing better competitive environments and of course to gain market share, aquatic equipment manufacturers have driven much of the new development.

Also playing a large role in the evolution of competitive swimming products is the International Swimming Federation (FINA). As the highest governing body for aquatic sports, FINA provides unified rules around all aspects of competitive swimming including legal stroke and turn technique, swimsuit style and fabric, anti-doping measures and pool deck equipment, including starting platforms.

It wasn’t until the 1936 Olympics in Berlin, Germany that swimmers had the advantage of starting their races from an elevated platform, instead of merely from the pool edge. And for several decades after the Berlin Olympics, starting platform technology didn’t advance much beyond these box-like platforms.

Today, the stars of competitive swimming deck equipment are the starting platforms. They are front and center in every lane on a competitive pool deck. Both FINA and pool equipment manufacturers have driven design changes to give swimmers a better advantage for launching into the pool with more velocity.

A major change in starting platform design took place in 2008 when FINA approved the inclusion of an angled wedge at the rear of blocks. This additional surface area provides for more powerful starts, as the swimmer’s rear leg is positioned on the wedge at the back of the block, like a runner’s start in track. At the same time, side handles were approved offering another surface area to pull against for more propulsion. 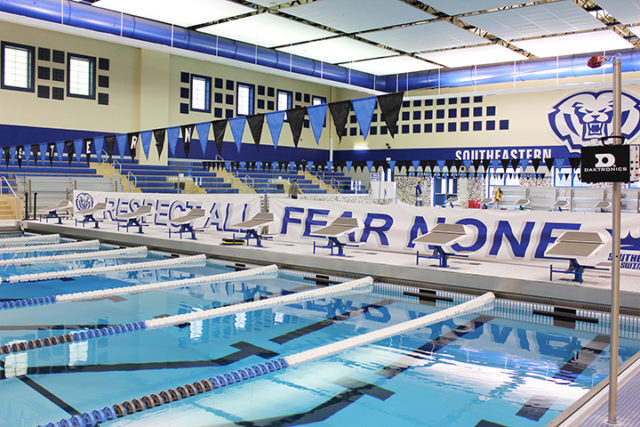 The most recent design change came in 2013 with FINA’s approval of a backstroke start ledge. Of the four competitive strokes, only a backstroker begins in the water, with feet placed on a sometimes slippery pool wall. The ledge is attached to the block or deck with straps that allow a backstroker more secure footing and insurance against slipping on the start.

Now most elite aquatic facilities have upgraded to starting blocks with these new features in order to win bids for major competitions. However, there are many aquatic facilities still looking toward upgrading. And there are many elements to consider – both from a product and an installation standpoint. How are the current blocks secured to the deck? Can new blocks retrofit into existing anchors, or is it best to start with new anchors (likely requiring re-drilling and re-bonding)? From a pool usage standpoint, will the new blocks need to be removed often to clear the pool edge for other events? Are school or team colors and logos a requirement? Since the track start wedge is the most significant new feature, how easy is it to use and adjust? 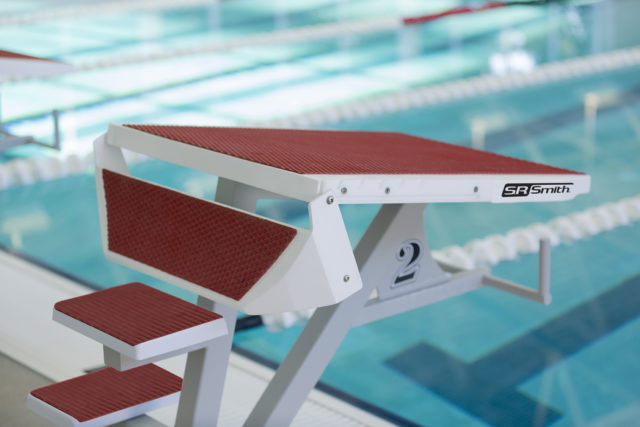 Working through these questions and others, plus investigating both installation and product cost ahead of starting block selection is key to being sure you make the right choice.

This summer, the Tualatin High School pool in Oregon installed new starting blocks in a facility that was built in 1998, with plans to install the same block style in another pool in the school district later in the year. There was concern that both pool decks weren’t substantial enough to be core-drilled for new anchors, so the Tigard Tualatin Aquatic Director, Anthony Markey did a considerable amount of research before selecting new starting blocks. He explains, “The grip on the old blocks was very worn and not effective anymore. My goal as the new aquatic director is to bring both facilities up to date on equipment that is old and dated. The blocks were one of the first things that I changed. We are very happy with what we purchased.” An added benefit is the S.R.Smith Velocity blocks are track wedge blocks, replacing old S.R.Smith blocks, and were able to fit into existing deck anchors. 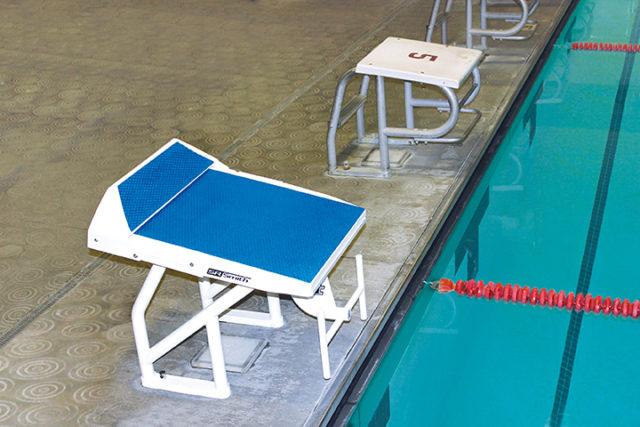