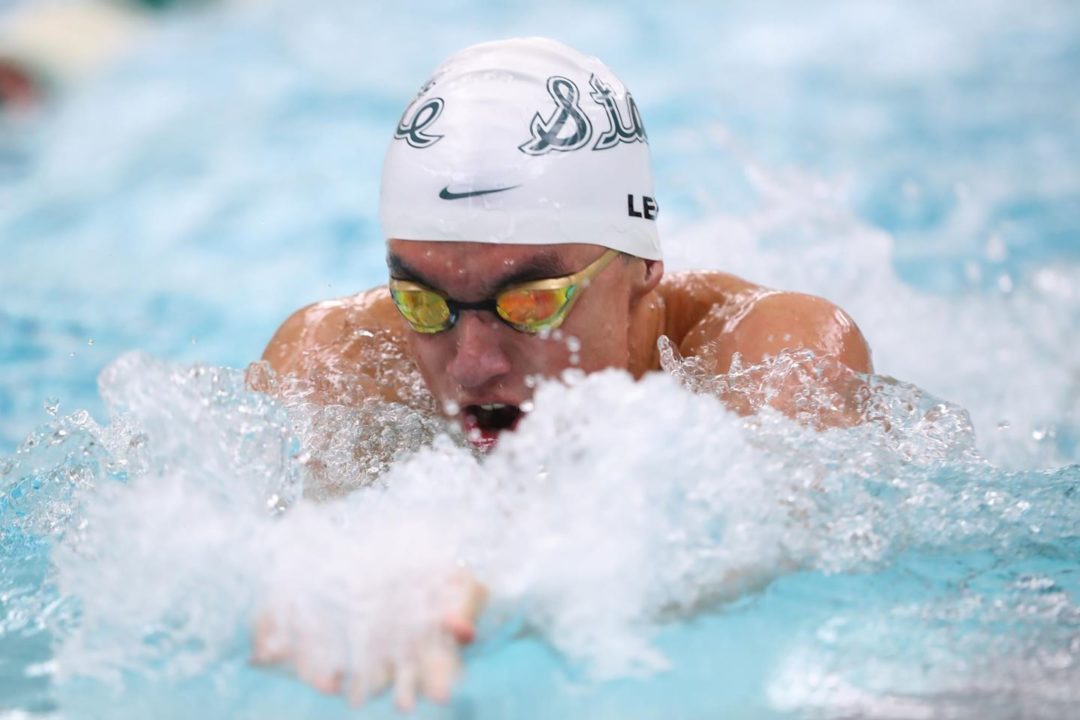 EAST LANSING, Mich. — The Spartans won their final home meet of the season Friday night against Cleveland State. The men won 163.5-135.5, while the women were victorious, 216-78.

“We did really well today and I’m proud of the team,” s aid head coach Matt Gianoidis “It gets a lot harder next week, but I thought we competed hard and for our women it was nice to win so many events.”

Both the men and women’s 400 medley relay kicked off the night for the Spartans with victories. The men’s relay of Charlie Ryan, Jonathan Lee, Michael Schwers and Aidan Farley finished with a time of 3:19.53. The women clocked a time of 3:48.18 swam by Sam Villani, Szara, Kasey Venn and Heineman.

Freshman Sophia Balow took a first-place finish in the 1000 freestyle, touching the pad at 10:23.45 to record her second win in this event on the season.

In the men’s 1000 freestyle, freshman Peter Corsetti and junior Guy Moskovich took the top two slots. Corsetti finished first with a time of 9:40.18, while Moskovich clocked a time of 9:47.56.

Sophomore Weston Youngblood finished in first with a time of 1:41.77 in the 200 freestyle for the second time this season.

The Spartan women took first and second in the 100 backstroke recording times of 57.68 and 57.79 swam by sophomores Kelly Heron and Claire Schenden, respectively.

Claire Schenden took a first-place finish in the 200 backstroke, clocking a time of 2:05.44.

Sophomore Lauren Biglin followed with another Spartan victory in the 500 freestyle with a time of 5:07.02.

On the diving board, junior Amanda Ling swept the night as she took first in the 1-meter and 3-meter with a scores of 268.12 and 295.65, respectively.

The Spartans hit the road next on Jan. 31 to take on rival the Michigan Wolverines. The meet is set to begin at 5 p.m.

The Viking men claimed first-place finishes in as many events, eight, as did the host Spartans. A trio of Vikings led the way by each winning a pair of individual events Friday.

Juniors Matt Akers, Timothy Kubacki and Dominik Niedzialek each won a pair of events for CSU.

Akers swept both diving boards in his first competitive action in over two months. He began his day by placing first in the 1-meter with an NCAA Zone qualifying score of 324.07 points. After winning the 1-meter by over 20 points, Akers took first in the 3-meter event with ease. His winning score of 312.68 was more than 35 points clear of the runner-up.

Kubacki and Niedzialek combined to sweep the backstroke events while each winning a race from a different discipline.

Senior Matthew Martin and sophomore Jack Krusinski each contributed one first-place finish and a runner-up placing.

The CSU men took second in both relays.

A pair of freshmen led the way for the Vikings on the women’s side.

Rookie Emma Kerro took second place in 3-meter diving with 254.48 points. She also finished third on the 1-meter with 240.52 points.

Jaszcz, Marinelli, junior Shaw Barney and Cartwright took second in the 200 free relay in 1:40.68. Yang, Cartwright, Barney and Marinelli took third in the 400 medley relay in 3:57.84.

Cleveland State will be right back in action Saturday afternoon as it finishes its road trip at Horizon League foe Oakland.