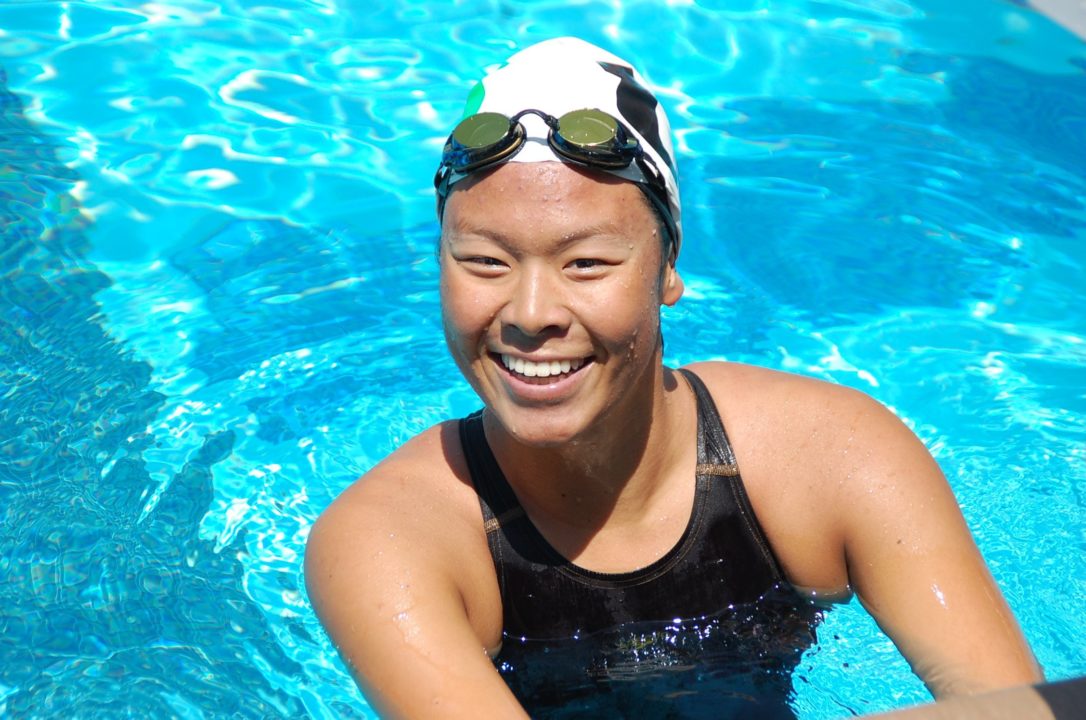 Southern California standout Sonia Wang has made a verbal commitment to swim at Harvard in the fall of 2015. Archive photo via Anne Lepesant

There’s something nice about getting your college decision out of the way at the beginning of the summer: all that pressure goes away and you can just focus on swimming well at your championship meets. That is exactly what Sonia Wang (our #12 recruit in the class of 2015) of Upland High School and Redlands Swim Team did when she gave her verbal commitment to Harvard yesterday.

“I fell in love with Harvard when I went for Junior Day. The campus was amazing and I really liked the team. But I was still looking at other schools. I had narrowed it down to a handful schools by July 1. Then (head coach) Stephanie (Wriede Morawski) and (assistant coach) Amanda (Kulik) came for a house visit and that made the difference.

“They talked about their future plans, about how they could benefit me as a swimmer, about how I could find my major (business or economics) at Harvard, about their training method, and about the culture of the team. It just felt right to me.”

“I am super excited to be able to swim with the girls on the team. It’s a very close group. They have strong team bonds and a positive attitude about training. And I am really lucky that my parents and my coach Martin Gregoire are very supportive; they’ll be 100% behind me no matter what I decide to do. It’s nice to know I have that kind of support wherever I go.”

To sweeten the deal, Wang’s older sister Oriana will be a senior at Harvard when Sonia is a freshman. “That wasn’t a deciding factor but it will really be nice to be with her again.”

To be clear, Wang has not yet been officially accepted to Harvard. As is true with all Ivy League schools, Harvard’s Admissions Office will not send its acceptance letter until the beginning of December, along with those of all Early Action candidates. The procedure for a recruited athlete like Wang is for Admissions to review her transcript and SAT scores, “support (her) application for admissions in the fall,” issue a Likely Letter, then offer her acceptance into the class of 2019.

What a great get for Harvard. Congratulations to both I have known Sonia and her family for many years. They are great family, very supportive of all swimmers.