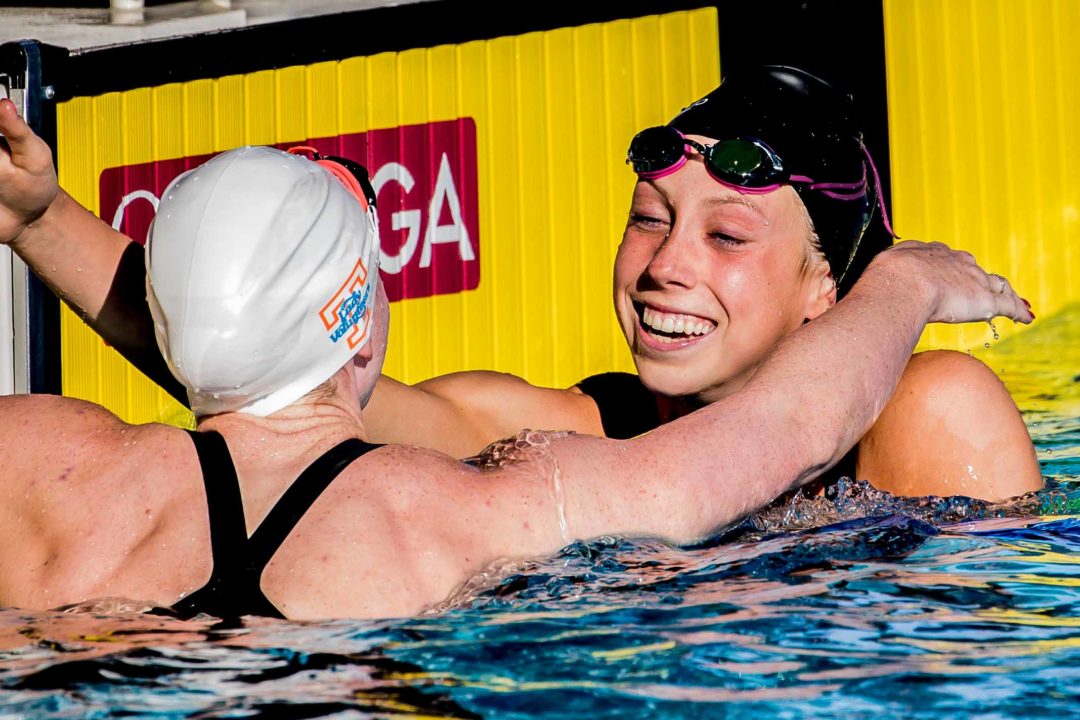 Gretchen Walsh (above right) was one of a number of individuals honored by the Southeastern Swimming LSC as award winners in September. Archive photo via Jack Spitser/Spitser Photography

The 2020 Dick Fadgen Coach of the Year Award recipient is Matt Webber of the Huntsville Swim Association (HSA) of Huntsville, Alabama. Webber is in his 11th year as the Head Coach and Program Director of HSA. Webber previously coached for the Birmingham Swim League as well as the Greater Chattanooga Aquatic Club (now known as the Baylor Swim Club). He has also previously served as the General Chairman, the Age Group Vice Chairman and the Finance Chairman of Southeastern Swimming.

The award is named for Dick Fagen, who founded Memphis State University’s Memphis Tiger Swimming in 1970.

The 2020 Senior Swimmer of the Year Award was presented to Gretchen Walsh of the Nashville Aquatic Club. Walsh is a celebrated swimmer who placed in the top 16 in four events at the 2019 US Nationals meet, swimming personal best times in all four events. At the 2019 World Junior Championships meet, Walsh was voted 1 of the 5 captains for Team USA. Walsh won the 100 free with a time of 53.74 and anchored the gold medal winning mixed 4×100 medley relay by swimming 53.01. On January 4, 2020, Walsh announced her verbal commitment to swim at the University of Virginia. Walsh will join her sister, Alex, at the University in the fall of 2020.

The 2020 Phillips Volunteer Award recipient is Tom Schumann and the 2020 Bob King Service Award winner is Kathie Battista of the Barracuda Swim Club of Northeast Tennessee.

Congrats to all winners!